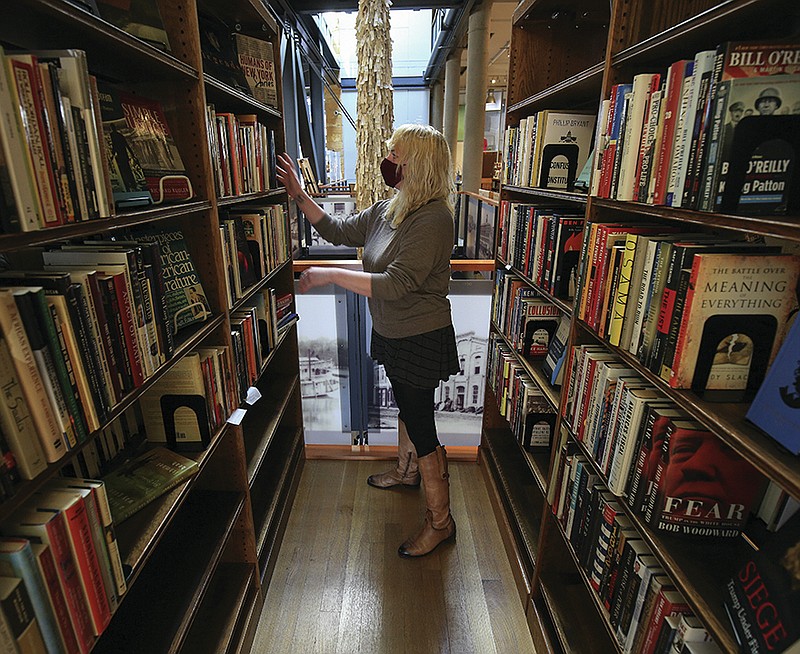 The Central Arkansas Library System is considering asking the Little Rock Board of Directors as soon as June or July to call for an election this fall in which voters would be asked to approve a millage increase to support the library.

The prospective election to draw more property-tax revenue to the library is meant to resolve a budget problem related to increased operating expenses associated with electronic materials, as well as the desire to shift away from using capital improvement bond revenue to cover those expenses.

According to the library system's executive director, Nate Coulter, library officials would need to make an effort in May and early June in order to present the millage issue for the city board's consideration.

"I would think early June would be our goal," Coulter said by phone Friday.

But during a recent meeting, library board members suggested the timing of the millage election could pose a challenge because Little Rock voters may have the opportunity to approve or deny two other tax measures in the near future.

The city board is scheduled Tuesday to give final consideration to a proposal from Mayor Frank Scott Jr. to permanently increase the city's sales-tax rate by one percentage point to fund a variety of quality-of-life initiatives.

City directors have been asked to call a July 13 special election on the mayor's tax increase, though members of the city board posed tough questions to the mayor during a recent meeting, suggesting they were not yet sold on his proposal.

Coulter noted that the city board ultimately with decide as to when the library's millage would go on the ballot.

"We recognize that we're subordinate both in terms of scope and priority to the city sales tax," Coulter said.

He said library officials will be comfortable with whatever city elected officials decide, "if and when the library board decides to go forward" with the millage election.

The board of the Little Rock School District also is considering holding a special election Sept. 14 to extend for 18 years the collection of 12.4 debt service mills. A vote by School Board members could take place later this month or potentially in June.

Coulter on Friday described the proposed millage election as the means by which the library will be able to address a long-term structural problem with the materials budget.

The popularity of electronic materials like e-books and audiobooks has increased within the library system, but the trend has resulted in a financial pinch because of a pricing model that is more favorable to publishers.

Coulter described himself as "basically an optimist" when examining "the long history of Little Rock voters supporting their local libraries and investing in them" by approving millages at the ballot.

In a written report to members of the library system's board for their April 22 meeting, Coulter said the board would need to ask Little Rock city directors in June or July to place the millage issue on the ballot in order for the revenue resulting from a successful September or October election to be available for the library system's 2022 budget.

He also noted in his report that a new state law will place more restrictions on when special elections can be held beginning in January, meaning that if the library foregoes a millage election later this year, options in an even-numbered year like 2022 would be February, August, May (during the primary election) or November (during the general election).

During the library board meeting held via teleconference April 22, member Andre Guerrero questioned whether there is any rule of thumb or mythology with regard to special elections pulling more voters in favor of a measure versus the "no-voters."

In response, Coulter suggested the library system could win over a majority of voters, regardless of whether election turnout is high or low, as long as the library presents a strong case.

At the same meeting, board member Robert Brown raised concerns about the timing in light of the three local tax items that are approaching the ballot box.

He said he supported the mayor's sales-tax plan. Nevertheless, Brown said, "By the same token, I worry about a situation where the School Board, the library and the mayor are all trying to get an increase in something, general election or special election ... there could be an [against-er] sentiment: 'I'm going to vote against all taxes.'"

He cautioned against the timing and asked if it was in the library's best interest to seek voter approval at the same time as the mayor and the school district.

The library may be able to demonstrate a net-zero increase in the overall millage rate by lowering the millage that supports the library's bond-indebtedness and trying to correlate the amount of increase for the operational millage, Coulter explained.

Minutes later, Guerrero echoed Brown's concerns over "the constellation of increases that could appear on one ballot in one election."

He added that "people do not like sales taxes," and said he is always astonished at the amount of sales tax paid on a purchase.

Though Guerrero said that he, too, supports the mayor's initiative, he said "I'd hate for us to be on the same ballot as the sales-tax increase. I don't know."

In response, Coulter suggested the possibility of the library's millage being on the same ballot as the city's sales-tax increase was unlikely, referring to the faster timeline of the city's proposed July 13 election.

However, he acknowledged the possibility of an August election if the city board fails to achieve consensus on the sales-tax increase by Tuesday.