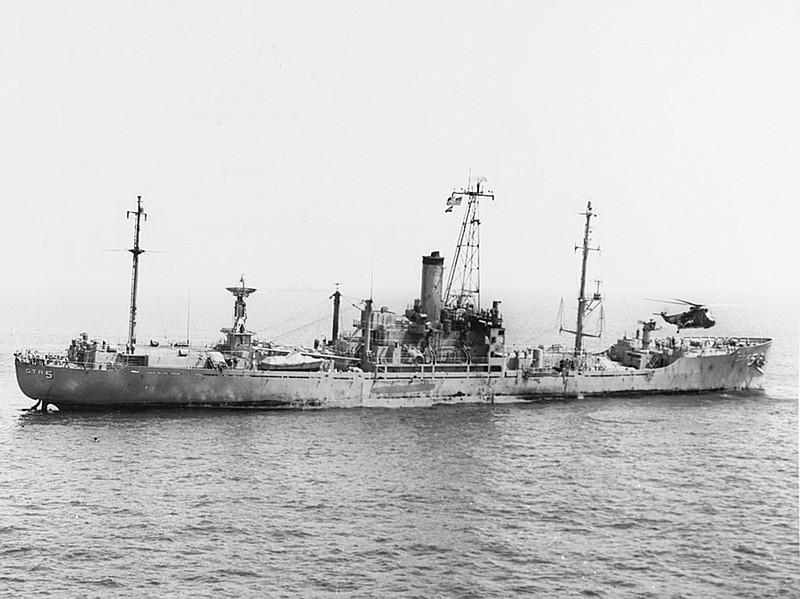 The U.S. Navy electronic reconnaissance gathering ship USS Liberty receives assistance from units of the U.S. Sixth Fleet after she was attacked and seriously damaged by Israeli forces off the Sinai Peninsula on June 8, 1967. (U.S. Navy file photo)

Because neither President Joe Biden, the Pentagon, nor a single politician has done so, I urge Arkansans to observe two minutes of silence on Tuesday to honor the memory of 36 U.S. Navy servicemen killed and 167 wounded on June 8, 1967, while serving in the eastern Mediterranean during the Six-Day War.

Although the dead and wounded American servicemen numbered in the hundreds instead of thousands, June 8, 1967 is as heinous a date of infamy as the Dec. 7, 1941 attack on Pearl Harbor and the 9/11 attacks on New York, the Pentagon, and Flight 93.

This time the perpetrator was not an enemy; it was an ally whose existence, economy, and security have been solely dependent on America's perpetual beneficence.

Not only did Israel murder and wound sailors on an unarmed American ship, but it is being handsomely rewarded to the tune of $3.8 billion taxpayer dollars every year.

The assault on the USS Liberty, a Navy ship moored in international waters, has to be the most egregiously shameful act of political expediency and reprehensible cowardice committed by President Lyndon Johnson, the Pentagon, and the United States Congress.

In 1982, I had the privilege of attending a standing-room-only presentation by the ship's officer James Ennes Jr. For well over two hours the audience listened to the decorated lieutenant commander's chilling personal account of the repetitive attacks perpetrated by Israel, the U.S.' so-called "only dependable ally in the Middle East."

Even though the Liberty displayed a large American flag, strafing and bombing by the Israeli air force and torpedo boats incapacitated--but did not sink--the ship.

Experts agree that Israel's attack had two motives: 1. The Israelis were worried that the American spy ship would discover their killing of hundreds of Egyptian prisoners of war in the Sinai. 2. They were also worried about the Johnson administration's discovering their plans to start a new front on the Golan Heights.

When Israel commits murderous acts (to wit the recent Gaza carnage), its hasbara machine goes into overdrive; it initially hoped to pin the blame on Egypt. Caught in the act by U.S. intelligence, what followed is a shameful national betrayal.

Admiral John Sidney "Jack" McCain Sr., John McCain's father, ordered two U.S. jet fighters dispatched from an American aircraft carrier in the waters of the western Mediterranean to return to base, thus leaving the Liberty and her crew at the mercy of Israeli pilots and sailors.

Subsequent to the assault, the U.S. Navy dispatched all the surviving Liberty sailors to various ships and military bases, ordering them "to keep their mouths shut."

As recently as last year, Liberty survivors' requests for permission to participate in and to be represented at the Veterans of Foreign Wars' annual convention in the nation's capital were nixed by the Pentagon.

A nation that selectively and dishonorably turns its back on its servicemen and servicewomen is a nation that has lost its soul.

During a Q & A session, Lt. Commander Ennes decried the United States government's cowardly inaction and the sweeping of this assault under the rug. He was equally incensed by the fact that his 1980 book "Assault on the Liberty" kept disappearing from university and public library shelves and metropolitan bookstores coast to coast.

Ennes' detailed narrative of the fiery strafing and large caliber bullets (over 800), the carnage, the cries of dying and wounded sailors, and the United States government's coverup left his audience shocked, dismayed, and angry. Like the young man at the end of Samuel Taylor Coleridge's poem "The Rime of the Ancient Mariner," Ennes left his audience "a sadder and wiser man [audience]."

Since June 8, 1967, American taxpayers have shelled out billions of dollars to Israel compliments of Democrat and Republican politicians. And Joe Biden and Donald Trump were the leaders of the opposing packs. To curry favor from Jewish donors and voters for the last election cycle, this same bipartisan assortment rewarded Israel with yet another $38 billion no-strings-attached gift stretched over a 10-year period.

Until and unless the dead and wounded American sailors and the many who have died since that day in 1967 are recognized for their valor and sacrifice, and until their grievances are redressed, the albatross of shame will hang over the cowardly characters who wave the American flag and prostitute their principles. This includes the media, starting with Israel's mouthpiece, The New York Times, and co-conspirators Fox News, CNN, MSNBC and other tribal wannabe news outlets.

Denied a memorial to honor them and to commemorate their tragedy, the survivors have established an online site that can be reached by googling "USS Liberty Memorial." Additional information is available in the James M. Ennes Manuscript Collection at the Hoover Institution, and Allison Weir's outstanding IfAmericansKnew Blog.

And wouldn't it be an homage to valor and justice if Steven Spielberg produces a documentary or movie to inform the world about this shamefully brazen act of terror? If he did, he would be accused of being a self-hating Jew, and the spurious charge of antisemitism, the sword and shield Israel employs to silence its critics, would thunder from the White House and through the halls of Congress.

It is apt that I close with an edited summary of the criminal assault on the USS Liberty from Ennes' book:

"In June 1967, jet aircraft and motor torpedo boats of Israel brutally assaulted an American naval vessel, USS Liberty, in international waters off the Sinai Peninsula in the Mediterranean Sea. The attack was preceded by more than six hours of intense low-level surveillance by Israeli photo-reconnaissance aircraft, which buzzed the intelligence ship 13 times, sometimes flying as low as 200 feet directly overhead.

"The attack lasted more than two hours ... and inflicted 821 rocket and machine-gun holes. And when the Liberty stubbornly remained afloat despite her damage, Israeli forces machine-gunned her life rafts and sent troop-carrying helicopters in to finish the job. U.S. Air Force intercept operators heard Israeli jets being vectored to "the American ship" which they were ordered to sink quickly. Those who have seen these transcripts insist that they leave no doubt that the Israelis knew they were attacking an American ship.

"Before USS Liberty arrived in the area, U.S. Sixth Fleet Commander Admiral William Martin promised to provide air support within 10 minutes if an emergency arose. Yet when the ship did come under attack, the White House blocked any air rescue for more than 90 minutes. Officers on the bridge of the aircraft carrier Saratoga heard Liberty's radio operators calling for help while bombs burst in the background, but were forbidden to help.

"When Navy jet aircraft were finally authorized to come to the ship's aid, the Israeli government suddenly ended the attack and withdrew, claiming that they had mistaken the ship for an Egyptian horse transport named El Quseir. Only then did the identity of the assailants become known.

"Details of the attack were hushed up in both countries. ... Meanwhile, in top-secret diplomatic mail, U.S. Secretary of State Dean Rusk accused the Israelis of demonstrating "blatant disregard for human life" and said that the attack was no accident. Then our government downplayed the intensity of the surveillance and the severity of the attack and imposed a news blackout to keep the official story under control.

"The official version is that the Liberty was reconnoitered only three times and then only from great distance. The American people were told that the air attack lasted only five minutes and that it was followed by a single torpedo and an immediate apology and offer of assistance."

Raouf J. Halaby is a Professor Emeritus of English and art.