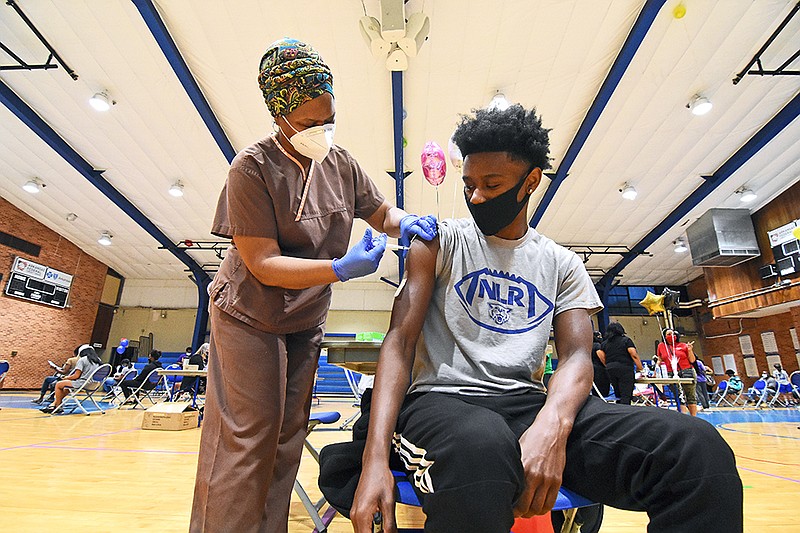 Arkansas' count of coronavirus cases rose Tuesday by 1,476 - the largest one-day increase in new cases in more than five months - while the number of patients hospitalized in the state with the virus topped 600 for the first time since Feb. 20.

The state also reported an additional 15 covid-19 deaths, the most in a day since March 30, bringing the state's toll to 5,970.

"Today’s report of 41 new hospitalizations should be of concern to unvaccinated Arkansans," Gov. Asa Hutchinson said in a tweet.

"98.3% of those hospitalized since January were not vaccinated."

The Republican governor spoke to residents in Blytheville at noon on Tuesday and was scheduled to speak at the Forrest City Civic Center at 6 p.m. as part of a series of meetings designed to encourage residents to get vaccinated.

[VISIT HERE FOR MORE INFORMATION ABOUT GETTING A VACCINE: nwaonline.com/coronavirus/vaccine/]

Excluding 2,932 cases that were added to Arkansas' count as part of a "data cleanup" on Feb. 28, the increase in cases on Tuesday was the largest in a single day since Feb. 5.

The average number of cases added to the state's count each day over a rolling seven-day period rose to 979, its highest level since Feb. 12.

With new cases outpacing recoveries, the number of cases in the state that were considered active rose by 879, to 8,134, the largest total since Feb. 17.

The increase in the hospitalized patients brought the number to 606, its highest level since Feb. 19.

It was the eighth day in a row the number had grown by double-digits.

The number of virus patients who were on ventilators rose by four, to 98, its highest level since Feb. 26.

After topping 200 over the weekend for the first time since February, the number of virus patients who were in intensive care rose by 27, to 240, its highest level since Feb. 18.

Meanwhile, Health Department figures continued to show an uptick in the state's vaccinations since the Fourth of July weekend.

At 5,551, the increase in the number of doses providers reported having administered, including second doses of the Pfizer and Moderna vaccines, was almost 3,600 bigger than the increase a week earlier.

The average number of doses administered each day over a rolling seven-day period rose to 4,785.

That was still down from an average of more than 5,700 a day just before the holiday weekend, however.