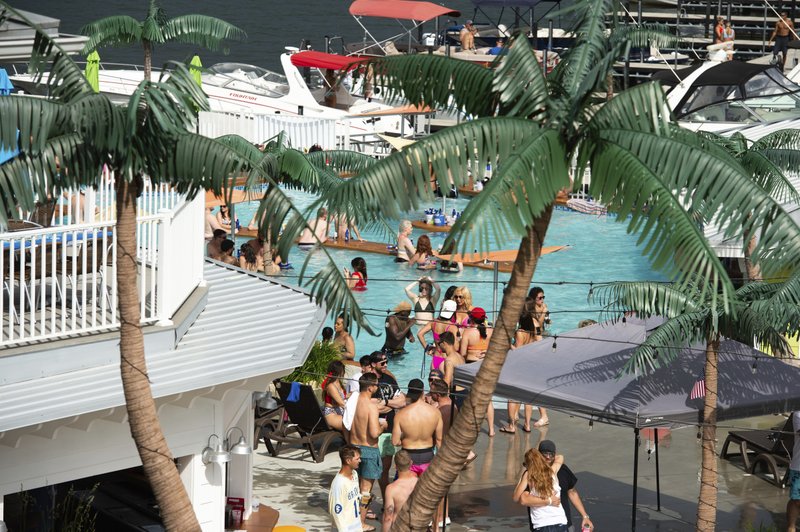 Crowds of people gather at Coconuts Caribbean Beach Bar &amp; Grill in Gravois Mills, Missouri, Sunday, May 24, 2020. Several beach bars along Lake of the Ozarks were packed with party-goers during the Memorial Day weekend. Several political leaders in the St. Louis and Kansas City areas, as well as the state of Kansas' health secretary, have condemned Lake of the Ozarks revelers for failing to practice social distancing, amid fears they could return to areas hard hit by the coronavirus and spread the disease. (Shelly Yang/Kansas City Star via AP)

The image, as much it shows an abundance of three-day weekend frivolity, demonstrated a high degree of bravery.

Or maybe it was carelessness.

Or possibly, it was idiocy.

It was an image as hard to miss as it was easy to predict: On Memorial Day weekend, the official start of summer in most years and the perceived end of covid-19 precautions for too many Americans in 2020, a crowd gathered at some pool or lake or beach. No social distancing. No masks for most party-goers. Lots of people breathing in close-up conditions.

One of the big scenes that caught national attention happened at the Lake of the Ozarks, about 200 miles from Northwest Arkansas, but there were also reports of gatherings at Lake Hamilton and a swim party or two around the state.

And probably, although it's impossible to tell from the images or videos we saw, there were a few alcohol-lubricated comments of how "they" are making too big a deal over covid-19 or how those masks and demands to stay a few feet from people are downright unAmerican. This is the America the boys went overseas to defend, some no doubt suggested, wrapping their defiance in the flag and patriotism.

No, forget wrapping anything in the flag. Someone might think you're using it as mask, and you ain't wearing no mask. No way. No how, because it's all those fear-mongers trying to take away our precious freedoms.

But wait. Isn't that Gov. Asa Hutchinson up there saying we need to do it? Aw, shoot, was he just faking it all those years ago when he got is education at Bob Jones University? That's not exactly a home for those of the liberal persuasion.

It was Hutchinson on Tuesday, the day after the Memorial Day observance, who volunteered to address what he deemed a "very good weekend" in Arkansas in which a "vast majority" did the right thing by their observance of social distancing and wearing masks. And that national media -- is he talking about all those fake newsers the president likes to tweet about? -- likes to take one or two instances that look bad and cover those, the governor said.

"That shows a lack of discipline," the governor's remarks went Tuesday. "When people are not socially distanced, whenever they are congregating, where the virus can spread rapidly. And that is a concern to me, and you don't diminish it, but you also want to recognize how many people in Arkansas have done the right thing."

Businesses are operating with safety in mind and many Arkansans are protecting themselves against the virus by following the guidelines, Gov. Hutchinson said.

"But there were more than a few that put their own comfort and convenience above the health of others, and that is not helpful," Hutchinson said.

Not helpful. That's about as harsh a public tongue-lashing as Arkansans are ever going to get out of Hutchinson.

St. Louis Mayor Lyda Krewson had a few words Tuesday, because she knows the Lake of the Ozarks draws people from hundreds of miles away, including many from her city.

"It's irresponsible and dangerous to engage in such high risk behavior just to have some fun over the extended holiday weekend," Krewson said in a statement Tuesday. "Now, these folks will be going home to St. Louis and counties across Missouri and the Midwest, raising concerns about the potential of more positive cases, hospitalizations, and tragically, deaths."

Some people are forgetting or ignoring that those infected with covid-19 can pass it along for several days before they show symptoms -- if the show symptoms at all. Public health officials urged those who attended such crowded events over the weekend to self-quarantine for two weeks, but who are they kidding? The people who attended such gatherings, lingering in crowds with no masks, aren't concerned enough about their own or anyone else's health to make that kind of sacrifice. Their neighbors, co-workers and families are not valuable enough to them to forego a a party or to at least take some precautions.

Why does any of this matter to Arkansas? Gov. Hutchinson had a few thoughts, saying he's eager to move the state toward Phase 2 of restoring the economy -- that is, expanding the number of people restaurants and other indoor venues can allow in. Getting there depends on whether the number of cases in the state go up or down, he said.

"The direction that we go from here totally depends upon the discipline and the commitment of the people of Arkansas to avoid circumstances in which they will contribute to the spread," Hutchinson said Tuesday.

We've not suggested people cloister themselves like nuns taking a vow of isolation. We've encouraged reasonable lifting of restrictions by leaders like Hutchinson, who has the dual responsibilities of guarding the public health while also creating the best possible scenario for economic recovery. It's not up to him, though, to make that happen. It's up to everyone in Arkansas who has the capacity to think beyond their own needs and wants.

It isn't the job of government leaders to sit idly on the sidelines while a pandemic spreads across the country. Personal responsibility is exactly what Gov. Hutchinson has based his administration's response to covid-19 on as he seeks to revive the economy. The people clamoring to "open up" the economy entirely because this virus hasn't spread as far and fast as once feared can afford to make such demands because reasonable leaders took the precautions necessary to face a virus that spreads more easily than any of us have faced in our lifetimes.

Nobody should interpret unwise decisions of some people as a trigger point to begin shutting down businesses again.

At the same time, it seems too many advocates for a complete reopening of the economy are also minimizing the potential damage that can be done as covid-19 spreads more aggressively. They're promoting the idea that we should open up restaurants, stores, amusement parks or movie theaters at the same time they are ridiculing the idea of social distancing and wearing masks. In this pandemic, it really can't be both without more sickness and more unneeded deaths.

Maybe it's not the "in" thing to take a moderate or middle-of-the-road approach to public policy issues in this your-either-with-me-or-against-me age of politics. But it's vital that Arkansans walk and chew gum at the same time: Move carefully to open businesses and get people earning paychecks, delivering products and services again while we all work together to combat the spread of the coronavirus.

Let's not behave as though we must choose either freedom or masks, or that we must pick closing businesses or embrace a higher death count. If we're really "all in this together," let's just behave accordingly.

Personal responsibility will be key to how Arkansas manages its way out of the most negative effects of covid-19.