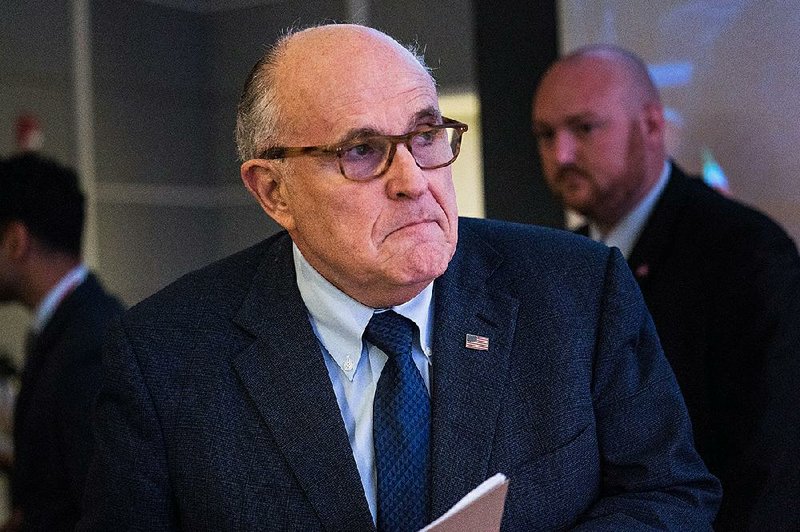 The president's reelection prospects would be best served if voters never heard the word Ukraine again. Yet President Donald Trump still loudly cheers Rudy Giuliani for going back there.

I compared Giuliani to Elmer Fudd two weeks ago. That gave Giuliani too much credit. Fudd was incompetent but honest. No, the better comparison here is Daffy Duck at his worst. Think back to those cartoons in which Daffy plasters "Rabbit Season" signs all over the place on the first day of duck season. That is exactly what is going on here.

Nothing Giuliani -- or someone competent and believable -- could find on Hunter Biden, private citizen and middle-aged ne'er do well, can possibly compete for scandal with President Trump openly extorting Ukraine's president to smear Hunter Biden, the son of Trump's leading political rival. Yet Giuliani keeps banging away. His "investigation" is a ceaseless reminder of why the president is under impeachment. Indeed, it is the cause of it.

Even the "rabbit season" fantasy looks sane next to the idea Ukraine, not Russia, hacked Democratic Party headquarters in 2016. Giuliani "investigates" that, too. Journalist John Harwood nailed it when he said: "It's a cover story, not a 'conspiracy theory.'"

The allegation Biden's father, former Vice President Joe Biden, did a dirty favor in 2016 for his son does not stand up to two minutes of good-faith scrutiny. Supporting the removal of Ukraine's famously corrupt "prosecutor" at the time despite the younger Biden being hired by a Ukrainian company is one of Joe Biden's finest moments.

Yet Giuliani brags on TV about getting the famously anti-corruption U.S. ambassador to Ukraine fired and smears her to boot. Both that ambassador and her temporary replacement reported Giuliani's skulduggery with alarm. The interim replacement testified he was prepared to resign over it. Giuliani responds by stepping up this game. He even returned from another trip to Ukraine and went to the White House to "report" to the president on the very day the U.S. House produced articles of impeachment over this goofy plot.

"Can we all, as sane human beings, agree that this whole notion of Donald Trump and Rudy Giuliani as a two-man international crime-busting duo is complete lunacy? Does anyone really believe that?" asked legal analyst Elie Honig.

Who pays for Giuliani's "investigation?" The president's required financial disclosures show no financing of these trips by the man referred to as Trump's private lawyer. Somebody pays Giuliani and foots his bills -- and not for the president's benefit.

Set aside my tongue-in-cheek theory that Giuliani is a double agent bent on destroying Trump. The people clearly benefiting, if anyone does, are the corrupt businessmen in Ukraine and Russia who profit from undermining Ukraine's pro-Western reform. This includes both of Giuliani's now-indicted business associates along with Paul Manafort's old crowd. Manafort, of course, is the former Trump campaign chairman in prison now for his corrupt Ukraine dealings.

Those same businessmen have excellent reasons for not wanting Joe Biden to win. A president who strongly supports reform in Ukraine and knows the country well is the last thing the people leading Giuliani on would want.

Joe Biden gave wholehearted support of Ukraine reform for years. He started when he was a senator. As vice president he once gave a speech on reform to Ukraine's Parliament in Kyiv. Hunter Biden got the job in question precisely because his employers hoped to buy themselves some protection. It did not work.

Joe Biden's long-standing goodwill toward Ukraine is exactly why the then-president of that country called him in April 2016. The U.S., among others, was threatening to cut off aid unless that corrupt prosecutor was fired. Biden took the call -- and gave tough love. Fire the scoundrel or lose a U.S. guarantee of a $1 billion loan. At the time, the International Monetary Fund was delaying giving Ukraine $40 billion for the same reason.

Back in those days President Barack Obama could get sharply criticized for wearing a tan suit. It is beyond all rational belief that his vice president forced removal of a reformer to protect his son but no one noticed this during a presidential election year. Oh, and then this "scandal" is "discovered" three years later? By Trump and Giuliani?

Yet people think they do Trump a favor by bringing this all back up. Each time, Daffy gets a face full of shot and burnt powder. Then he calls others "despicable."