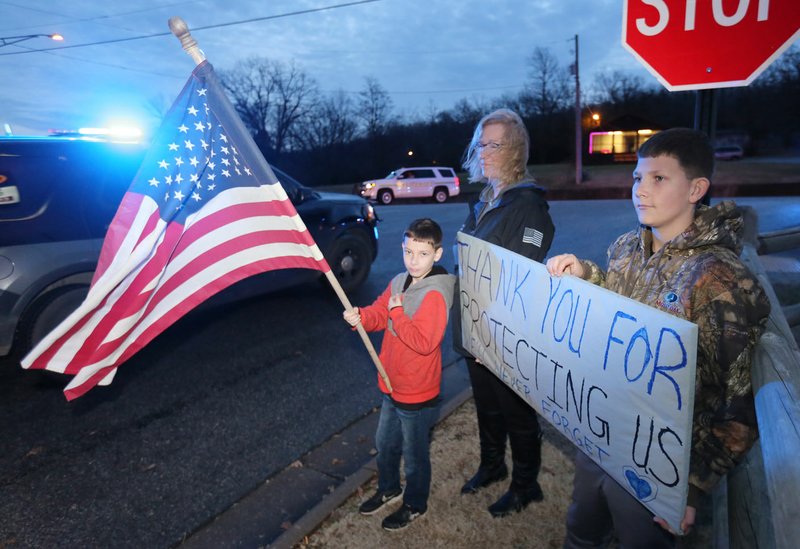 NWA Democrat-Gazette/DAVID GOTTSCHALK James O&#xe2;&#x20ac;&#x2122;Connor (right), 12, stands with his brother Jordan, 9, and Kelly Cantrell, with the Washington County Sheriff's office Monday, December 9, 2019, as the processional carrying slain Fayetteville police officer Stephen Carr from the Washington County Coroner's office to Little Rock passes by. Carr, 27, was shot and killed about 9:40 p.m. Saturday while in his patrol vehicle in the parking lot behind the police station.

None of them are supposed to die this way.

Yes, it's morbid to consider how anyone is supposed to die, lest it be old age. Saturday night's murder of 27-year-old Fayetteville Police Officer Stephen Carr, however, runs counter to expectations about how the end of watch might come for any of these men and women in blue, these uniformed protectors of communities across the nation.

Officer Stephen Carr’s death serves as a reminder of the respect owed to those men and women ready to stand strong in protecting the community.

Being a police officer is risky business. The people who pin on the badge know it more than the rest of us can. Not a one of them have embraced the duty to protect and serve without weighing the possibility of harm that comes with the job.

Police officers respond every day to uncertain situations, the kind that unnerve most people. They pull people over for traffic violations that, if unchecked, could represent a threat to others. They knock on a door when someone has dialed 911 to report screaming and the possibility that someone behind that door is in danger. They respond to a store alarm to render assistance. They check on the welfare of others.

And in each of those scenarios, officers cannot know the totality of circumstances. They're going in blind to the specifics. Violence can arise from almost any interaction. But officers have devoted themselves to development of de-escalation skills, to training in how to inject stability into unstable circumstances. They've attempted to run the scenarios through -- what's likely to happen and what's the best way to respond -- before they hit the streets. And their training prepares them to meet threat with force where necessary.

Our law enforcement officers know, because they've seen it too many times at other law enforcement agencies, that every call could be their last. This is what leaves the rest of us in awe. How amazing it is that the men and women of the badge stand ready to run into the unknown, to step between the community and violence so that most of their neighbors can live and work in peace.

They face the danger and do their jobs despite it -- or maybe because of it -- every day, every shift, in about 18,000 agencies across the nation employing somewhere around a million officers. And, though we earnestly hope against it, we've seen enough officers across this nation give up their lives in the line of duty to know it's going to happen again. Just last Friday and Saturday, officers were killed in Huntsville, Ala., and Houston.

But none of us prepare for our law enforcement officers to die the way Stephen Carr did. Police Chief Mike Reynolds said Carr was "executed." It's hard to describe it any other way. Officer Carr sat in his patrol vehicle behind police headquarters, preparing for a shift working a Saturday night on Dickson Street. Other officers were inside, also getting ready for the night. Without warning, the gunfire began and, within seconds, Officer Carr was fatally struck where he sat.

Carr's fellow officers quickly emerged, chasing the shooter a short distance. Two officers shot at him, ending the incident before it spread. The shooter died in possession of a 9mm handgun and two boxes of ammunition, according to police. The entire episode lasted less than 30 seconds, according to Chief Reynolds.

As awful as it is, we can grasp the reasons an officer might die chasing a criminal or intervening in a domestic assault. But an ambush in the parking lot of the police station? What can possibily explain that? The heartbreak is multiplied because Officer Carr appears to have died just for being a police officer. He was attacked without warning, leaving him no chance to react.

Having accepted the risks of the job, Officer Carr, like his fellow officers, made the decision at the start of every shift to stand against the dangers, to step into the community and put himself at risk for the people of Fayetteville. That says a lot about the kind of man he was, the kind of officer he had committed to being.

"I've got 131 officers including myself," Reynolds said in a Sunday morning press conference. "If I had 131 Stephen Carrs, I wouldn't be more ecstatic. He came from a law enforcement family. He knew what the job was about. He just wanted to serve his community."

Serve, he did. To the very end.

A community mourns the loss of a lawman, heartbroken for the young man's family and friends. The vast majority of people didn't know him directly, but we honor his dedication to public service, to which he gave his all.

It's one thing to intellectually know this is a possibility for a police officer; it's far, far more sobering to witness it here, in a community in which such violence is rare in great part because people like Officer Carr go to work each and every day.

As Fayetteville pays tribute, we're mindful life will, for most, edge increasingly back toward "normal" as the days pass. It must. Those of us living must simply go on. From time to time, we should all allow our minds to return to the name Stephen Carr, as a reminder of valiant service and sacrifice officers are making every day for the benefit of us all.