Rollin' on the river 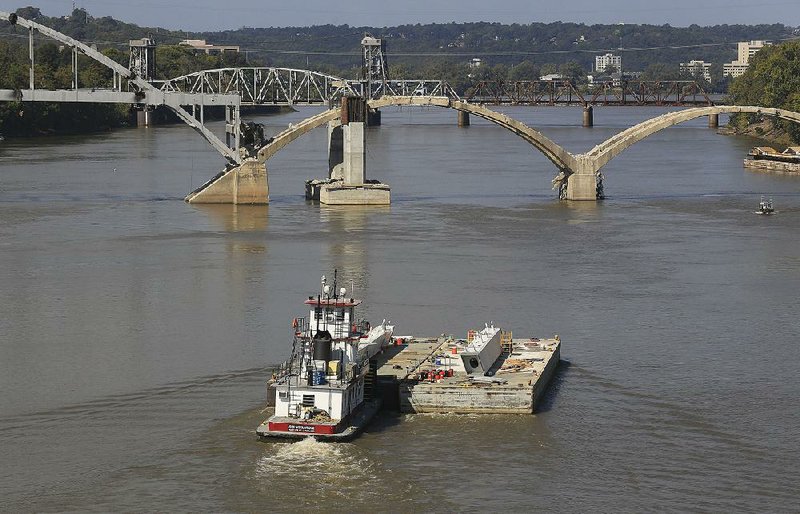 A tow boat moves a barge on the Arkansas River, part of the McClellan-Kerr Navigation System.

Navigation to Little Rock on the McClellan-Kerr Arkansas River Navigation System began 50 years ago, but the political wrangling that made the massive project possible started more than two decades before that.

World War II had ended, and members of Congress from Arkansas and Oklahoma looked to the east with envy. They saw the benefits the Tennessee Valley Authority brought to the area it served. Congress chartered the TVA in May 1933 to provide navigation, flood control, electricity generation and economic development to rural areas that had been particularly hurt by the Great Depression. Parts of Mississippi, Tennessee, Kentucky, Alabama, Georgia, North Carolina and Virginia benefited from the TVA.

"With the country reeling from the Great Depression, President Franklin D. Roosevelt created his New Deal to help America recover," the official TVA history states. "The Tennessee Valley Authority was founded to help the hard-hit Tennessee Valley, where it was tasked with improving the quality of life in the region. Against the backdrop of World War II, TVA launched one of the largest hydropower construction programs ever undertaken in the United States."

In 1946, the Arkansas Basin Development Association was established to push for a major navigation project on the Arkansas River that would include flood control, hydropower and recreational aspects. On July 24, 1946, Congress approved the Rivers and Harbors Act, which authorized the building of a navigation system on the Arkansas River from Catoosa, Okla., near Tulsa to the mouth of the river in southeast Arkansas.

Navigation was traditionally difficult on a stream that was prone to flooding and contained numerous sandbars and cutoffs. Members of the Arkansas and Oklahoma congressional delegations were determined, however, to use public funds to harness the stream and milk the same types of benefits for their constituents that they had seen flow to areas served by the TVA.

Roosevelt and his allies in Congress had an easier job selling TVA during the Great Depression. Congressional supporters of the Arkansas River initiative had to deal in the post-war boom years with colleagues who considered the project a boondoggle and a recalcitrant president in Dwight D. Eisenhower. Their eventual success was the result of dozens of backroom deals, compromises and brute political strength.

"Completion of the project was not assured by passage of the 1946 act," Kay Goss writes for the Encyclopedia of Arkansas History & Culture. "Only $55 million was authorized for initial improvements with later funding to be approved on a year-to-year, dam-by-dam basis. Sen. John L. McClellan of Arkansas and Sen. Elmer Thomas of Oklahoma sat on the Senate Appropriations Committee. In 1948, Gov. Robert S. Kerr of Oklahoma ran a successful campaign to become Oklahoma's junior senator, where he joined McClellan in championing waterway transportation. ...

"In 1954, the project was placed in a 'deferred for further study' category. A major engineering problem needed to be solved: 100 million tons of silt flowing down the Arkansas River annually could prevent navigation. Professor Hans Albert Einstein, son of the famous physicist, proposed a way for the river to clean itself, thus reducing sedimentary flow. Parts of the river would be deepened, straightened and narrowed. This would stabilize the banks and make the river flow faster. The faster waters would flush out sediment that would otherwise settle and require constant dredging.

"The plan was tested by the Waterways Experiment Station in Vicksburg, Miss., and was found to work. The system worked so well as tested and put into practice that $31 million was stricken from the budget for three upstream dams that had been designed to trap sediment. In 1956, Kerr won funds for three reservoirs vital to the navigation system in return for throwing his support behind the popular Federal Aid Highway Act, which authorized the interstate highway system. Eisenhower vetoed the bill, but his veto was overridden by Congress.

"Eisenhower initially refused to authorize spending the money for Kerr's project until Congressman Page Belcher, a Republican from Tulsa, explained that he might lose his seat to a Democrat in the next election were the funds not approved."

Sixty years ago, construction on the system began at the site of the Dardanelle Lock & Dam. Fifty years ago--Oct. 4, 1968, to be exact--navigation was opened to Little Rock.

"A U.S. postage stamp was issued bearing the words 'Arkansas River Navigation' to commemorate the occasion," Goss writes. "On Jan. 4, 1969, the first commercial barges (from Wheeling, W.Va., and Pittsburgh, Pa.) docked at the Port of Little Rock. On Dec. 30, 1970, the system was ready for full use. It encompassed 443 miles."

President Richard M. Nixon spoke at the formal dedication of the McClellan-Kerr Arkansas River Navigation System at the Port of Catoosa on June 5, 1971. At the time, it was the largest civil works project ever undertaken by the U.S. Army Corps of Engineers.

The Little Rock Board of Directors voted to issue $3.15 million in general obligation bonds, which allowed the Little Rock Port Authority to purchase six parcels of land totaling 1,200 acres from 1968-72. The bond proceeds also allowed the authority to build warehouse space. The purchase was a combination of wetlands and cropland.

The authority's board identified 151 acres as the ideal location for a terminal on the banks of the Arkansas River. Land was cleared, wetlands were drained, a dock area was created and the Little Rock Port Railroad was established in 1968 to support the facility. Upgrades were made to Lindsey Road, Frazier Pike, Fourche Dam Pike and Mauney Road.

An additional $1.095 million in general obligation bonds in 1969 allowed the authority to construct four miles of railroad track, enlarge the warehouse and extend utilities.

A slackwater harbor was later constructed with funding from the federal Economic Development Administration. The inland channel is 4,500 feet long, 15 feet deep and 320 feet wide. It provides direct access to the river and has no current. That allows cargo to be handled regardless of conditions on the river.

In 2011, Little Rock voters approved a sales tax increase that, among other things, provided up to $10 million for the authority to acquire additional property to offer industrial prospects. In August 2014, the authority moved its offices into what's known as the Arkansas River Resource Center.

Among the first things a visitor to the resource center notices are the clocks on the wall showing the time in cities around the world. Those clocks are meant to convey the fact that the Port of Little Rock connects the capital city to the world. In a spacious conference room overlooking the river, Bryan Day, executive director of the Little Rock Port Authority, talks about the importance of the port to the Arkansas economy.

"This is an amazing asset, but a lot of people don't know we're here," says Day, who was once parks and recreation director for the city of Little Rock. "We'll celebrate our 60th anniversary next year. When you get right down to it, we're economic developers with the ultimate goal of creating high-paying jobs in Little Rock.

"Before the Corps of Engineers completed the navigation system, it obtained commitments from Muskogee and Tulsa in Oklahoma and Little Rock, Fort Smith and Pine Bluff in Arkansas to build ports," he continues. "The timing was good for Little Rock. The industrial area along 65th Street had filled up, and new space was needed for manufacturers. The first industry out here was AFCO Steel, which Fred Brown moved to the port. We now have about 3,500 acres with 40 businesses employing almost 4,000 people. It's a 24/7 operation. The economy is doing well right now, and most of our businesses are busier than they've ever been. With low unemployment rates, finding a workforce has become our biggest challenge."

Businesses at the port include Welspun Tubular, which manufactures steel pipe for the oil and gas industry; LM Wind Power, which makes wind turbine blades; Lexicon, which produces fabricated steel products; Delta Plastics of the South and Revolution Bag, which produces polytube and can liners; Interstate Signway, which fabricates highway signage; J&M Food, which turns out cookies and cheese straws; Novus Arkansas, which provides amino acids and minerals for the animal feed industry, and Ring Container Technologies, which makes plastic containers for Skippy brand peanut butter.

In 2017, Suzhou Tianyuan Garments Co. announced the acquisition of a building on Fourche Dam Pike. The company produces clothing for Adidas, Reebok and Armani at five factories in China. Adidas will be the company's main client at its Little Rock location.

Day stresses that the Little Rock Port Authority is about much more than serving barge traffic on the river. It is in essence in the logistics business, taking advantage of its location near major rail lines, Interstate 440 and the Bill and Hillary Clinton National Airport. The authority now operates 17 miles of railroad tracks and owns two locomotives. It makes about $3 million a year off railroad switching fees, another $1 million off its river docks and the slackwater harbor and about $250,000 from land it leases.

"We're a municipal port authority, but we don't use any public funds for our day-to-day operations," Day says.

He adds, though, that the money from the 2011 city sales tax to buy land was needed. The authority has purchased 700 acres of land since Day took the job in 2014.

"We need at least another 700 acres," he says. "We don't have enough product to offer prospects. It takes money, vision and time to make these purchases happen."

In the Little Rock Port Authority's 2017 annual report, board chairman Dexter Doyne called the port "a global destination for manufacturing and a major economic engine for all of Arkansas." He said the board's goal is to make the Port of Little Rock "the best inland port in America."

To that end, the authority now produces marketing materials in Chinese and Spanish.

"People just don't know all that we offer out here," Day says. "We have to find a way to tell our story." 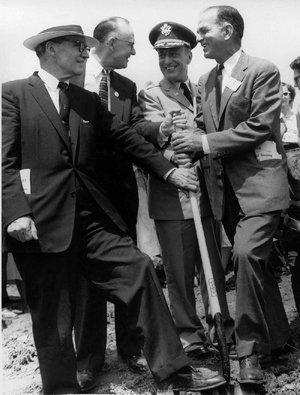 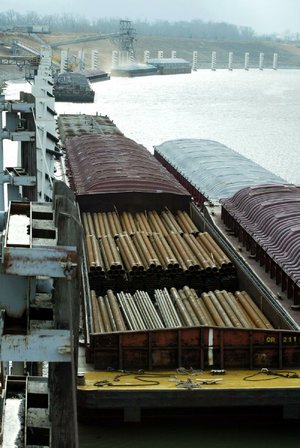 Photo by Arkansas Democrat-Gazette archive photo
Barges are ready for use at the Tulsa Port of Catoosa, Okla., the end of the Kerr-McClellan Navigation System. 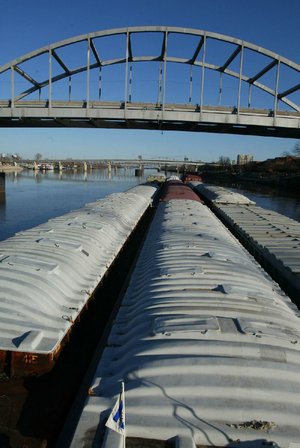 Photo by Arkansas Democrat-Gazette archive photo
The tug Victoria pushes 12 barges under the old Broadway Bridge on the Arkansas River in Little Rock. 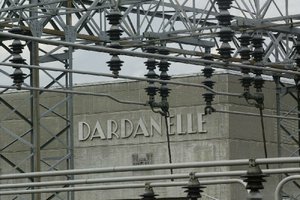 Photo by Arkansas Democrat-Gazette archive photo
The Dardanelle Lock and Dam, where construction of the McClellan-Kerr Navigation System began 60 years ago. 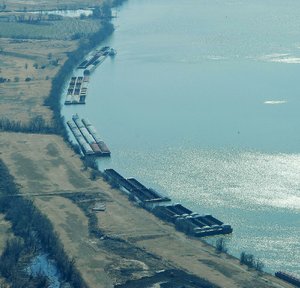 Photo by Arkansas Democrat-Gazette archive photo
A line of barges wait on the east side of the drawbridge that crosses the Arkansas River between Van Buren and Fort Smith, which committed to build a port before the navigation system was completed.

Print Headline: Rollin' on the river