It's early, and college football polls are fun 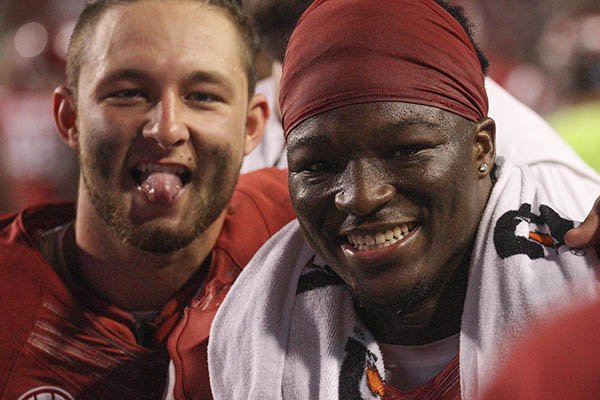 Arkansas receiver Drew Morgan, left, and running back Rawleigh Williams pose for a camera during a game against Texas State on Saturday, Sept. 17, 2016, in Fayetteville.

Driving home Sunday morning, somewhere around Clarksville, the signal for the Bill Vickery show on KABZ-FM, 103.7 The Buzz finally came on. It would get stronger with each mile, as would his promise to read The Associated Press Top 25 poll.

Since the Arkansas Razorbacks beat then-ranked TCU and jumped into the poll at No. 24, polls have become important in Arkansas. Fans are discussing their high hopes openly and freely.

Football is supposed to be fun, and until the College Football Playoff poll is released after the ninth week of this season, other polls matter in the sense that they give people something to talk about.

After the CFP poll is released, the others might as well go on vacation. But until then, the fun has only begun.

It is a poll that yours truly begrudgingly takes part in. Begrudgingly because the poll has to be sent by 8:30 Sunday morning so it can be the first to hit, even if you have to wait until almost 2 a.m. to see whether Texas could beat California -- it couldn't -- and it consequently dropped out of the Super 16 poll.

Vickery first called it the NFF poll, then FWAA, and for the most part he sounded confused about the authenticity of the poll, which is understandable since it has only been around for three years. The FWAA has been around much longer and, in fact, it was the FWAA that presented the Arkansas Razorbacks with its Grantland Rice National Championship trophy after the 1964 season.

However, the FWAA/NFF poll is as good as there is for now.

It is decided by 45 voters who are spread out geographically to avoid bias. Many of the voters are past presidents who are still active in journalism, whether it be newspaper, television, radio or an accredited website.

The Hogs didn't make the poll after the TCU win, but they did receive votes from six voters. But obviously that win got the attention of the voters, and this week they came in at No. 16. Texas A&M is No. 10.

When the AP poll came out, the Hogs were No. 17 and the Aggies were again No. 10, which obviously sets up a great game in Arlington, Texas, on Saturday night.

On my ballot, from which they previously had been missing, the Hogs were No. 15. Each week, at almost the same time as the poll is released, the FWAA/NFF also releases how each of the 45 voted.

The Hogs at No. 16 barely made it with 57 total points, while Florida was next with 51 and then Nebraska with 48.

The Razorbacks were named on 19 ballots, of which the highest was No. 10 (by three voters, none with ties to Arkansas). They also got a couple of No. 11s.

It should be mentioned that one of the voters who had them at No. 10 is Kevin McGuire of NBC's College Football Talk, and a No. 11 was Teddy Greenstein of the Chicago Tribune. Those two have voted for the Hogs on all three ballots this season.

In other items, apparently five of the voters went to bed before the Longhorns game ended. They all had Texas on their ballot and not Arkansas.

Alabama got 41 first-place votes, and the program of the week, Louisville, got the other four. But Bobby Petrino was lacking some respect in the voting since the Cardinals got Nos. 10, 9 and 8 once, and were No. 5 or higher on 15 ballots. They are No. 3 behind Ohio State.

See, for now, all polls are still fun.

Print Headline: It's early, and college football polls are fun