The truth about Wildfires

Intensity of modern blazes affects our ability to control them by KYLE DICKMAN, Special to the Washington Post | August 30, 2015 at 2:52 a.m. 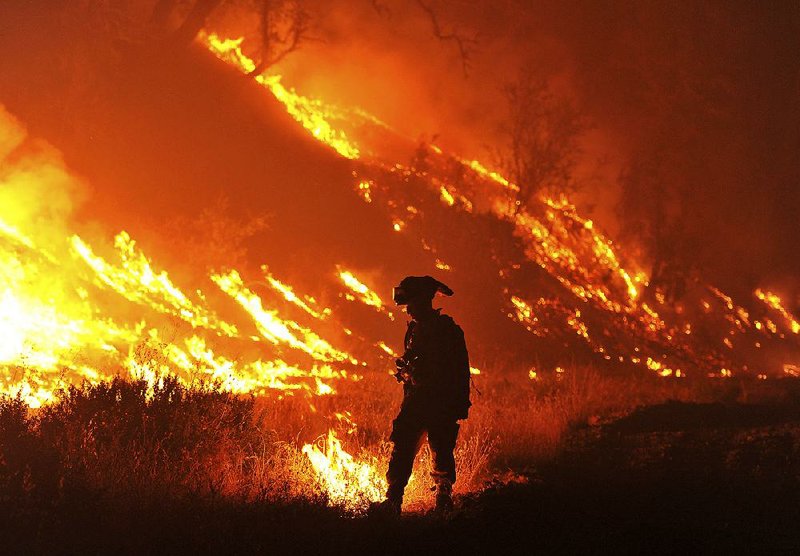 Northern California's burning. Oregon's ablaze. Three firefighters died in Washington recently while trying to keep flames from razing the entire town of Twisp. With weeks of fire season still to go, the federal government has already spent more than $800 million trying to extinguish blazes that promise to rival history's worst in terms of size, destructiveness and cost. In other words: same sad stories, new year. But maybe some things we think are common knowledge about wildfires aren't true. Like the following: 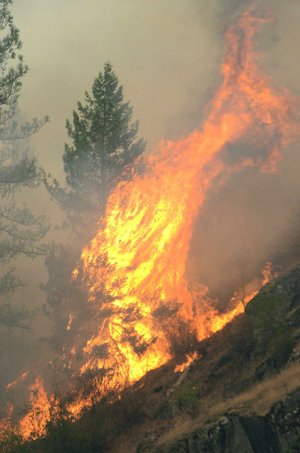 Photo by Barry Kough / Lewiston Tribune/AP
Fire consumes trees along the Clearwater River in north central Idaho on on Aug. 15, part of the Lawyer complex of wildfires caused by lightning.

Photo by Ted S. Warren / AP
Guided by a spotter plane (right), an airplane drops fire retardant while fighting a wildfire on Aug. 21 near Twisp, Wash.

1. Technology has changed the way we fight fires

Air tankers dropping 11,000-gallon payloads of blood-red fire retardant on flames look great on the nightly news. So do drones mapping a fire's active edges with infrared cameras. But the boots-on-the-ground work of stopping fires has changed little since 1910, when America started its grand experiment to remove wildfires from forests. That year, a blaze called the Big Burn scorched three million acres of prime timber across Idaho's panhandle and into Montana, infuriating the U.S. Forest Service, whose income relied on leasing public lands to timber barons who wanted only green trees. In the wake of the Big Burn, the agency dedicated itself to dousing every spark in the forest. It cobbled together troops of young men and handed out shovels, axes and orders to clear flammable material around the perimeter of wildfires. Without fuel to burn, the fires stopped.

Over the next century, the agency modernized firefighting with surplus World War II equipment, including Jeeps, helicopters and parachutes for smokejumpers. But the most effective weapon in the increasingly sophisticated arsenal remains the many thousands of young men and women who, each year, spend their summers removing flammable materials around wildfires with chainsaws and hand-held tools. So far, no technology has been able to replace human judgment and dexterity when it comes to culling potential kindling. "The fact of the matter remains you still have to engage the fire, and that means going in and building lines, often by hand," says fire researcher Jim Cook.

2. Fires are bigger now than at any point in history

It's true that between four million and 10 million acres of forest burn each year, 40 percent more acreage than just 40 years ago. But today's fire seasons--and even individual fires--are actually smaller than the historic norm. Before the 20th century almost 30 million acres burned every year. The single biggest U.S. wildfire of the past 50 years, Arizona's 2011 Wallow Fire, burned a whopping 500,000 acres, but there were at least five fires in the 19th century that blackened twice that many acres. Three of those were larger by a factor of five.

What's different about today's fires is the intensity with which they're burning. One reason is that fire suppression has changed Western forests. Take the ponderosa stands of the Southwest: Historically, low-intensity blazes, ignited by lightning or indigenous peoples, burned every five to 10 years, thinning the forest of young saplings and brush and leaving just 150 large trees per acre. Today, in the absence of flames, those stands are choked with as many as 1,200 trees per acre--too thick to walk through without risking a branch in your eye.

Another reason is the warming climate. The average annual temperature is 1.7 degrees higher than the 20th-century average, and by the end of this century that number is forecast to climb an additional four to six degrees. The extra heat wicks water away from plants, drying them out and priming the forests for fire.

Scientists call the resulting breed of blaze "megafires," which burn so intensely that firefighters have little hope of containing them. A few examples include Colorado's 2012 Waldo Canyon Fire, which burned about 350 homes in Colorado Springs; the 2013 Yarnell Hill Fire, which torched 130 homes and killed 19 firefighters outside a small Arizona town; and New Mexico's 2011 Las Conchas Fire, which burned about an acre of mature pines every second for 14 hours straight.

In 2014 Agriculture Secretary Tom Vilsack announced a larger firefighting fleet and an increased budget ($2.2 billion, up from $2.1 billion the year prior) for the Forest Service. California Gov. Jerry Brown has called for thousands of additional firefighters. Colorado has invested significant resources in a new aerial fleet with a stated intent to suppress all blazes of a particular size.

The truth is that at a certain point, firefighters have as much ability to control a wildfire as the National Guard does to stop a hurricane. Recognizing when a fire has reached that point seems to be the trouble. Just two percent of the 50,000 to 90,000 fires that burn every year account for 98 percent of the combined $4.7 billion that fire agencies--federal, state, county and municipal--are estimated to spend fighting fires each summer. These cost-gobbling blazes almost always flare up near towns as Washington's Carlton Complex did last year when it blackened 256,000 acres near Pateros and Malott. Despite the best efforts of 3,000 firefighters and more than $23 million spent, it was the largest fire in Washington history and scorched almost 300 homes in just two unpredictable days. Sometimes, the safest thing firefighters and citizens can do is get out of the way, even if that means watching homes burn.

There are 70,000 communities, 1.1 million homes and almost $269 billion worth of property at very high risk of wildfire damage in the United States. By one estimate, less than two percent of those communities have done anything to prepare for the flames. Under current practices, more wildfires will menace these homes.

But certain strategies can mitigate the risk. From a planning perspective, communities can treat fires like floods by looking at fire-frequency maps to determine the places where homes are most likely to burn, a policy followed in Australia. Homeowners can create defensible space around their houses by using chainsaws and chippers to thin the forest near their property. The National Fire Protection Association found that homes with a fire-resistant roof and 30 feet of defensible space have an 80 percent chance of surviving a wildfire. During the tragic Yarnell Hill Fire, ranches built with fire-resistant materials and surrounded by defensible space survived 30-foot walls of flames while the homes around them burned.

5. Fires must be put out

For the past 50 years wildland firefighters have extinguished 98 percent of blazes within 24 hours of ignition. It has been a tough transition for the woods. In one way or another, most Western forests and the wildlife that lives within them evolved beside wildfires. Some extraordinary species of beetles breed only in the heat of fires, and hooved creatures graze on the grass that eventually grows in the wake of flames. The impossibly huge Sequoia redwoods of Yosemite National Park require extreme heat to germinate. Flames cause the trees' cones to bloom like flowers, freeing the otherwise locked-away seeds to root in the fertile soil left behind by the burn.

Americans must learn to live with fires. It will take preparing homes and communities for the worst blazes, letting flames do the good work of thinning trees and intentionally igniting more fires when the time is appropriate. It took a century to remove fire from the landscape. It'll take at least that long to teach people that the flames are not just something to fear.

Print Headline: The truth about Wildfires