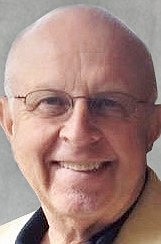 Thomas Marvin Hogg, better known as "Tom," 78, went home to be with his Lord, Wednesday, April 6, 2022, at Washington Regional Hospital in Fayetteville, Arkansas. Tom graduated in 1961 from Hall High School in Little Rock, Arkansas, where he was a member of the Rhythm Band. He was also in the choir. He began his career as a draftsman for C.H. Guernsey & Co. At his passing, he was a Project Engineer on assignment in Huntsville, Arkansas, for CT&T Inc., of North Little Rock, Arkansas. He loved playing music. He played bass guitar in local bands in the Little Rock area in the 1960's. And later in churches in various locations across Arkansas. He met Lynda Dean Jacobi in high school. They were wed on February 27, 1961.
Tom is survived by his wife, Lyn, sons, Vic and Jason, grandsons, Bryan, David, Joshua, Anthony, and Samuel Hogg and four great-grandchildren, his brother, Bob Hogg, and many friends and co-workers. He was the son of Norris and Mildred Hogg of Little Rock, Arkansas.
A service of remembrance will be held on Monday, April 11, 2022, at 11:30 a.m., in the chapel at Ruebel Funeral Home, 6313 West Markham St., Little Rock, Arkansas. Burial will follow at Forrest Hill Cemetery. Arrangements are under the direction of RuebelFuneralHome.com.