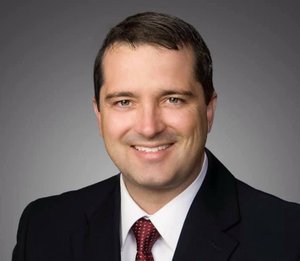 James Kelley Cradduck, age 49, of Rogers passed away Sunday January 5, 2020. He was born October 3, 1970 in Aurora, Colorado the son of James and Bobbi Fisher Cradduck. He was preceded in death by his father.

He was a Veteran of the United States Army serving during Operation Just Cause. He was a police officer for Rogers Police Department for over a decade holding many different ranks and positions during that time then going on to become the Benton County Sheriff from 2012-2016. Kelley had a servant's heart, was loving and forgiving and he displayed that during his time in law enforcement and his everyday life. Halloween was his favorite holiday and was a co-owner of a Halloween Store, he was an avid Broncos fan and loved the cold weather and snow. He aspired to move back to Colorado. His favorite movie was Tombstone and was inspired by what King Leonidas and his 300 Spartans accomplished.

He is survived by his wife Sabrina; three sons, Logan, Landon and Mason; three daughters, Taelyn, Mackenzie, and Piper; his mother, Bobbi Cradduck; a brother, David Cradduck and several other family members and friends.

Funeral Service will be held 11:30 a.m. Thursday January 16, 2020 at Christian Life Cathedral with the burial to follow at 1 p.m. at the Fayetteville National Cemetery with military honors. To sign the online guest book visit www.nelsonberna.com.