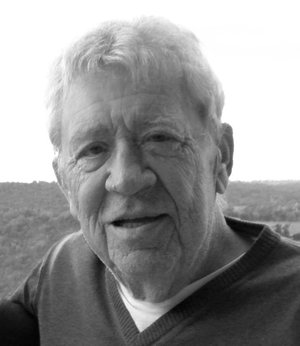 Tom Lutz rode on ahead March 28, 2017 from the Willard Walker Hospice Home in Fayetteville, Arkansas. He was born in Wichita, Kansas on February 19, 1939, to Scott T. Lutz and Mary Ruth Courtney Lutz. Tom graduated from the American Academy of Dramatic Arts in 1961 and moved west to purse his acting career. He left acting to partner in a cue card business in Los Angeles and later became a writer for 15 years for Hee Haw, the weekly television comedy show.
After leaving show business, he learned the oil business from his father and successfully drilled wells in western Kansas. This allowed him to pursue his passion for architecture and design. He built and remodeled over a dozen homes for friends and family in Missouri, Kentucky, Arkansas and Arizona.
He is survived by his wife Lisa Morgan Lutz and his sister, Marguerite Jean Lutz of Fayetteville.
Tom's wishes were for no services to be held at his passing. Besides being a wonderful friend, loving husband and brother and all-around great guy, he always left a smile behind. He cherished and nurtured his many friendships from his school days to as recently as last week.
Special thanks must go to his closest friend, Eric Sherwood for always being there for Tom and to the excellent care he and his family received from the Willard Walker Hospice Home.
In lieu of flowers, the family asks that memorials may be sent to the Fay Jones School of Architecture and design (checks payable to the University of Arkansas Foundation), 120 Vol Walker Hall, University of Arkansas, Fayetteville, Arkansas 72701 and the Willard Walker Hospice Home, 325 E Longview St. Fayetteville, Arkansas 72703. To sign the online guest book visit www.mooresfuneralchapel.com.