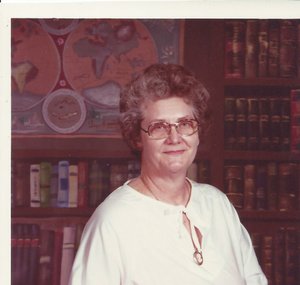 Myrtle Johnston, age 92, passed away Sunday, Oct. 26, 2014, in Fayetteville. She was born Nov. 20, 1921, in Gillham, Ark., the daughter of David William and Annie L. Oliver Guire.
She was preceded in death by her husband, Preston Johnston; and both of her parents; one sister, Muriel Fasold; and two brothers, David Austin Guire and Orval Guire.
She was a member of the Sequoyah Methodist Church, Delta Kappa Gamma and the Ohio Teachers Association. She also was a teacher in public schools.
She is survived by five brothers, Chester Guire of Carson City, Nev., Russell Guire of Plymouth, Minn., Raymond Guire of Las Vegas, Nev., Patrick Guire of Hopkins, Minn., Donald Guire of Cloverdale, Calif.; one sister, Alma Kitchens of Fayetteville, Ark.; and many nieces and nephews.
Visitation will be Wednesday, Oct. 29, from 5-7 p.m. at Moore's Chapel.
Funeral service will be held Thursday 10 a.m. at Sequoyah Methodist Church. Burial will follow at Fairview Memorial Gardens.
In lieu of flowers, memorials may be made to Sequoyah Methodist Church.
To sign the online guest book, visit www.mooresfuneralchapel.com.