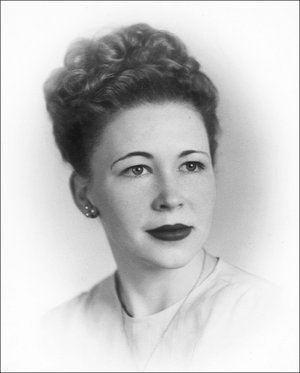 Ruth Virginia Cook of Rogers passed on May 15, 2013. She was born on September 28, 1927 in Vanndale, Ark. to the late Egbert H and Delia E (Ollison) Hall. She was preceded in death by her husband of thirty-three years, Grover Melvin Cook, who passed on January 13, 1982.

She was a devoted and loving wife, mother and grandmother, who loved spending time with her family and friends. She found comfort and strength in her Lord, Jesus Christ. She especially enjoyed going to church and singing the old gospel favorites. Family and friends will never forget her ability to laugh and smile each day, even through the last fifteen years of her life, as she suffered from a debilitating illness.

Ruth and Grover settled in Little Rock after he graduated from the University of Arkansas. Grover worked as a mechanical engineer until his death in 1982. Ruth was a homemaker when her children were young and later worked as a receptionist for the UAMS Urology Clinic for twenty years. After her retirement, she joined her son, Steve, and his family in Rogers, Ark.

Visitation will be held from 2-4 p.m. Sunday, May 19th at the Griffin, Leggett, Healey & Roth Funeral Home, 5800 W. 12th Street, Little Rock, Ark. 72204. Funeral Services will be held at the funeral home on Monday May 20 at 10 a.m., officiated by Brother Jaime Alexander, Senior Pastor of First United Methodist Church of Bella Vista. Ruth will be laid to rest at Pinecrest Memorial Park in Alexander, AR next to her beloved husband, Grover.

Please send your messages of love, comfort and support to Mrs. Cook's online guestbook at www.griffinleggetthealeyroth.com.