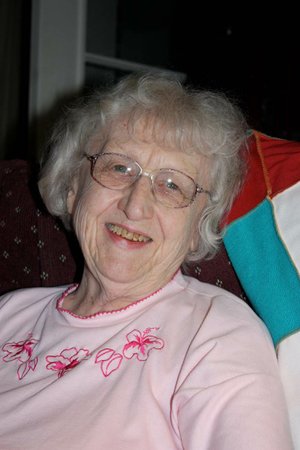 Arleen grew up in Chicago and worked for her father as a bookkeeper. She attended a music conservatory, and became a soloist, church organist, piano teacher and voice teacher. In the 1940s, she toured with a trio, The Melodears, and later sang at The Muny Opera in St. Louis. Locally she was active in the Spavinaw Literacy Council in Gravette and the Friendly Neighbors Club.

She was married to William Knoderer, who preceded her in death.

A memorial service will be 2 to 4 p.m. on Saturday, May 18, 2013, at the new building at Shiloh Retreat Center in Sulphur Springs. The service will be a celebration of life and attendants are welcome to speak about Arleen and share a story about her during the celebration. An ice cream social will follow.

In lieu of flowers, donations can be made to Habitat for Humanity in Bentonville or the Friendly Neighbors Club in Sulphur Springs.

Cremation arrangements are by Callison-Lough Funeral Home of Bentonville.

Online condolences may be made at www.callisonlough.com.