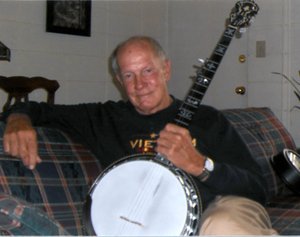 George R. Coppage, age 68, of Little Rock, a longtime resident of Fayetteville, died on Aug. 10, 2012. He was born on April 3, 1944, in Gary, Ind., the son of Joe and Willine Coppage.
George was a graduate of Fayetteville High School in 1962, where he starred in football, basketball and track, and was an honor graduate. He was offered both football and track scholarships by the University of Arkansas Razorbacks but decided to attend college as a regular student.
He graduated in 1967, earning a bachelor of arts with a major in English, also with honors. Later he returned to the U of A and completed a master's in education in 1978. He was a member of the Sigma Nu Fraternity while in undergraduate school. After receiving his master's degree, he taught in public schools in Fort Smith and Huntsville, and from all accounts was a respected and inspiring teacher. He was a talented musician, accomplished on both the banjo and guitar, and he had a marvelous singing voice. He could play and sing all types of music, and his friends said his voice sounded more like Neil Diamond than Neil Diamond. He played and sang professionally for a while, and later in life he built several banjos from scratch. He was also accomplished in furniture refinishing and restoration.
George proudly served his country in the United States Air Force from 1966 to 1971. He served a tour of duty in Vietnam as a pilot. He was a commander of a C-123 aircraft and flew 175 combat missions. He was awarded the Distinguished Flying Cross for "for extraordinary achievement while participating in aerial flight." After his tour of duty in Vietnam, he continued to fly USAF aircraft to Southeast Asia out of Travis Air Force base in Northern California.
He will be remembered as a person with a kind and generous heart and very loyal to his friends and family.
He was preceded in death by his parents; and one sister, Jan Bonner.
He is survived by his sister, Jerry and her husband, Gary, from Garfield, Ark.; nieces, Suzanne Campbell from Provo, Utah, Kathleen Bonner from Atlanta, Ga., and Melissa Brown from Oklahoma City, Okla.; and nephews, Rodney Brown from Oklahoma City, Okla., and Alan Brown from St. Louis Park, Minn.
Cremation arrangements are under the direction of Moore's Funeral Home, and a memorial service will be held at the National Cemetery in Fayetteville on Tuesday, Aug. 28, at 2 p.m.
To sign the online guest book, visit www.mooresfuneralchapel.com.