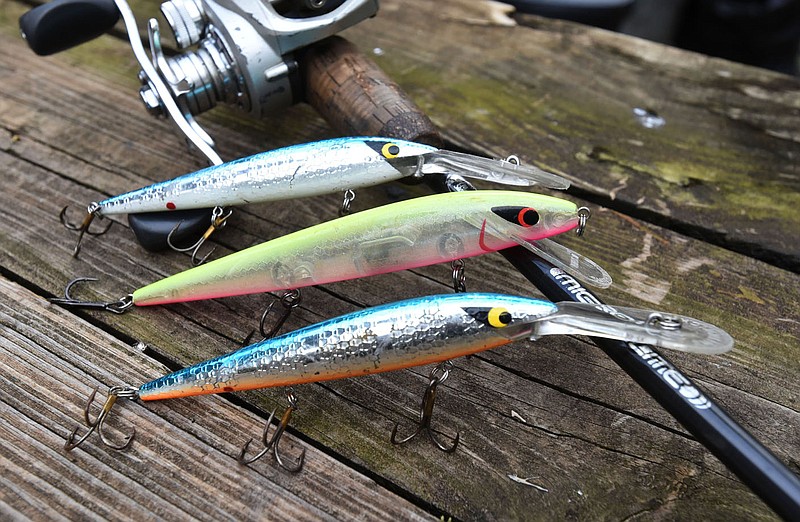 Jerk baits are a great cold-water choice for getting black bass to bite. Walleye, striped bass and sometimes crappie will bite these lures that have a wobbling, swimming action. (NWA Democrat-Gazette/Flip Putthoff)

Catching fish with jerk baits is enough to coax anglers away from the fire place for a day on the lake.

We have plenty of pleasant days in January and February for hitting the water to cast jerk baits, hoping for a strike from Mr. Big Bass. Long, minnow-shaped jerk baits are a favorite lure at Beaver and other lakes in the Ozarks, big or small.

Once water temperatures drop below 55 degrees, jerk baits become the go-to lure for lots of anglers. Black bass ambush jerk baits with a vengeance during winter, but crank one through the water and that hard-hitting strike could be from a walleye, striped bass, even crappie.

Jerk baits that suspend in the water column are what most anglers prefer. The common technique is to cast, then crank the reel handle six or eight times to make the lure dive. How deep it'll go depends on if it's a shallow, medium or deep-diving jerk bait. I like a deep diving bait that gets down eight to 10 feet.

Now stop the retrieve and let the lure rest, suspended under water. After it sits for several seconds, sweep or pop the rod tip to pull the jerk bait through the water a few feet. You'll feel it swimming, then stop it again. Jerk, cast, repeat. Hold on tight to the rod handle. A big fish may try to rip it out of your hands.

A simpler way is to just reel the lure slowly through the water, stopping it occasionally.

There are about as many brands of jerk baits as there are recipes for chili. I'm fond of the Smithwick Rogue, which has been around for decades. If I can catch fish with it, anyone can.

See, I have this anti-fish magnetic field that evidently travels down my line to the lure. Fish generally avoid me, but now and then a miracle happens, and I'll catch one.

The craziest fish I've caught on a jerk bait was a freshwater drum. I cast my Rogue on a cold, cloudy day along a gravel and rock bank that sloped gently toward the water. After a pause, I gave the rod tip a jerk and the tug or war was on. Whatever I had was a big 'un that got me reaching for the net.

When that fish was in the boat, I was staring at a drum of about 15 to 20 pounds. I thought it might be a state record. A quick check showed it was about 25 pounds shy of the record 45-pound, 7-ounce freshwater drum.

Another crazy catch happened years ago in the Shaddox Hollow arm of the lake on a January afternoon. I tossed my Rogue into shallow water along a point and a big fish crushed it. Beaver can be ultra-clear in the winter, and it was easy to see this was a striped bass of about 15 pounds. Weird to catch one so close to shore. Stripers usually prowl in open water.

A fine-sized walleye graces my living room wall here at the shack-ri-la that I caught with a Rogue in January 2014. This one smacked my deep-diving Rogue where a bluff wall transitioned into a steep bank of basketball-sized rock. That walleye ended up as dinner, but not before I measured it and had a taxidermist fix me up with a fiberglass replica.

Yes, my anti-fish magnetic field is strong this year indeed. I'll 'fess up that I've only caught two jerk-bait bass at Beaver Lake so far this winter. But one was a solid 5-pounder that bit right around Christmas five minutes into a fishing trip.

That fish also went against rule No. 1 of bass fishing. That is, one must motor at least three miles from the boat ramp before making the first cast. Friends and neighbors, that 5-pounder must have been fond of concrete. It was lounging on that ramp like it was a patio.

Oh the memories of catching bass, walleye, even freshwater drum with jerk baits. No wonder I'm a Rogue-aholic during winter.