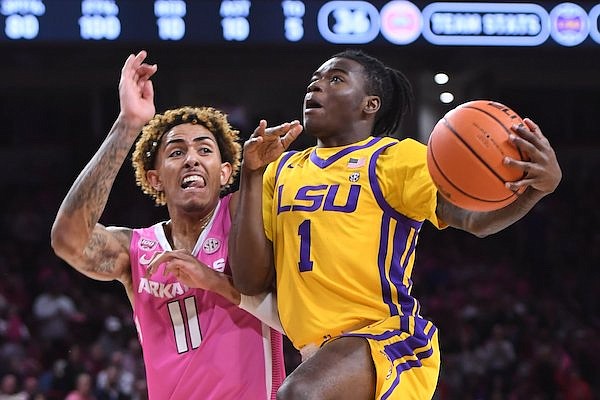 Arkansas forward Jalen Graham (11) reaches to block a shot Tuesday, Jan. 24, 2023, by LSU guard Cam Hayes (1) during the first half of play in Bud Walton Arena in Fayetteville.

FAYETTEVILLE — Arkansas won its second consecutive basketball game with a convincing 60-40 victory over LSU on Tuesday at Bud Walton Arena.

An already shorthanded Arkansas roster was even thinner against LSU. Center Makhel Mitchell did not play after suffering an injury to his foot area three days earlier against Ole Miss.

Only eight Razorbacks saw the court, but depth didn’t seem to matter as Arkansas employed a suffocating defense. LSU was 3 of 25 from the floor and committed 10 turnovers in the first half.

The Razorbacks led 38-14 at halftime.

LSU cut Arkansas’ lead to 11 points on multiple occasions in the second half, but the Razorbacks were never seriously challenged. Arkansas pulled away with a late 12-3 run that included four easy dunks, plus an Anthony Black three-pointer on a slick behind-the-back pass from Davonte Davis.

The Razorbacks held the Tigers to a 14-of-54 shooting performance, including 1 of 9 from three-point range. Arkansas scored 18 points off 15 LSU turnovers.

Adam Miller and KJ Williams each scored nine points to lead LSU, and Williams had a game-high 11 rebounds.

Arkansas made 23 of 51 field goal attempts, including 5 of 13 from three-point range. The team had one of its better free-throw shooting performances of the season by going 9 of 12.

Arkansas wore pink jerseys for the first time as part of Coaches vs. Cancer Week. The game was well attended despite a snow storm that began about four hours before tipoff, which prompted Razorbacks coach Eric Musselman to grab a microphone and thank the crowd just after the game ended.

Arkansas will step out of conference to play at No. 17 Baylor on Saturday as part of the Big 12/SEC Challenge. The game will tip off at 3 p.m. and will be televised by ESPN.