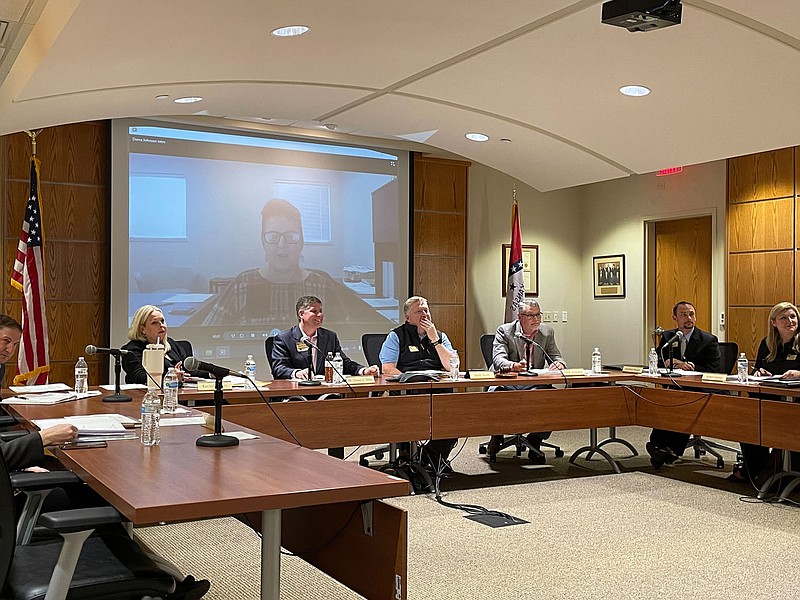 The Northwest Arkansas Community College Board of Trustees and Dennis Rittle, college president, listen to Diana Johnson, senior vice president for learning, who is shown speaking on the screen behind them during the board's meeting Monday, Jan. 9, 2023.

Megan Bolinder, dean for workforce and economic development, announced the news at the college's Board of Trustees meeting Monday.

"It became clear to us that if we were to be the mountain biking capital of the world, we needed a sustainable trails training program," Bolinder said. "We need to be able to build and maintain the trails that are making this region so remarkable."

The three-year, $8 million grant comes from the Walton Family Charitable Support Foundation, which also provided money two years ago for the college to set up a bicycle assembly and repair technician program.

Some of the grant money will go toward renovating the college's former physical plant building into a trails laboratory. The goal is to have the program up and running by the fall 2024 semester, Bolinder said.

Trails trade school students will be able to gain certification in trail building and maintenance and build upon these credentials by earning a bike technician certification and an associate degree in construction technology or general technology, according to a news release from the college.

Goals of the school include producing a workforce of certified trail technicians, ensuring access to regional bicycle trails and promoting responsible environmental practices, the release states.

"Our region has an incredible opportunity to solidify Northwest Arkansas as a major hub for outdoor recreation and our academic institutions play a big role in that," said Steuart Walton, chairman of the Charitable Support Foundation, in the news release. "This new trade school will drive innovation in trail building here in the mountain biking capital of the world, throughout our state, and across the nation."

There is demand for the kinds of skills the trails school will teach, Bolinder said.

"If you look at our local growth, we can't graduate enough students in construction to fill the need" of local firms such as Rock Solid Trail Contracting or Progressive Trail Design, she said.

"They need a workforce that they can say, 'OK we know they have these skills and we can send them out on a job.'"

The college's bicycle assembly and repair technician program has served more than 80 students thus far, "and so we have been given a chance to build on that success," Bolinder said.

The Board of Trustees on Monday approved establishing a director's position for the trails trade school.

In other business, the board heard an update on the college's attempt to raise its millage rate this spring.

The board unanimously agreed in November to seek a 0.4-mill tax increase in an election May 9, which if approved would raise the college's millage rate from 2.6 to 3.0 mills.

The millage was originally 3.0 when voters approved the ballot issue that established the college on Aug. 15, 1989, according to college officials. However, Amendment 59 to the Arkansas Constitution triggered reductions that brought the millage down to 2.6, they said.

Mat Mozzoni, president of the board of the college's foundation, said a ballot question committee has been formed called "Restore Our Millage."

The foundation board of directors fully supports this tax issue and "will be actively involved ensuring this thing passes," Mozzoni said.

"The consultant will develop a strategy for us that will gather information and data we need for potential voters and conduct an in-depth poll of voters and will work with us to implement the campaign and get-out-the-vote effort," Mozzoni said.

He said the superintendents of both the Bentonville and Rogers school districts have expressed their support for the millage campaign.

The additional 0.4 mills would cost homeowners an extra $8 for every $100,000 of home value each year, according to Grant Hodges, a college spokesman.

All nine seats on the Northwest Arkansas Community College Board of Trustees were up for election in November as a result of redistricting following the 2020 census. Five incumbents retained their seats and four new members were chosen.

Terms are typically six years, with three trustees elected every two years. At Monday’s meeting, trustees drew lots to determine the length of their first term so their terms are staggered. Here are the results: