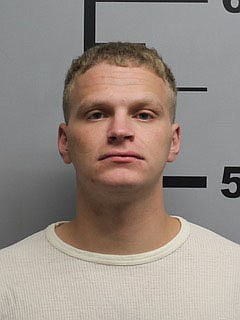 BENTONVILLE -- A Siloam Springs man had his second jury trial in less than a year, and it ended Wednesday the same as the first one -- with guilty verdicts and a prison sentence.

Donald Mouse, 21, was charged as a habitual offender with robbery and misdemeanor battery. Mouse has six prior felony convictions. The robbery charge is usually punishable with a prison sentence ranging from five to 20 years, but the maximum was 40 years because of Mouse's criminal history.

The jury recommended Mouse serve 40 years in prison for robbery and one year for battery. Benton County Circuit Judge Brad Karren followed the recommendations and imposed the sentences.

Mouse was accused of hitting Thomas Davis with sticks and rocks and taking his backpack and bicycle. Davis, who was homeless, was in Memorial Park in Siloam Springs at the time of the incident on Sept. 14, 2020.

Mouse also was in Karren's courtroom in November when he was sentenced to 39.5 years in prison after a jury found him guilty of aggravated robbery, possession of firearm by certain persons, theft of property and two counts of aggravated assault. Those charges were connected to the Sept. 12, 2020, armed robbery of the Phillips 66 gas station at Cheri Whitlock Drive and North Mount Olive Street in Siloam Springs, according to court documents. He was accused of stealing $200 in cash and $100 worth of cigarettes, according to court documents.

Davis testified Tuesday he called 911 and reported his attack and robbery to the police. He described his attacker to the jury as "a blond-haired kid" and identified Mouse as his attacker in court.

Davis picked Mouse's photograph out of a lineup showed to him by police. Davis suffered a bloody nose and other minor injuries in the incident. He told jurors the glasses he was wearing were damaged in the attack.

Brianna Robbins, deputy prosecutor, asked Davis about the value of the items stolen from him.

"A lot to me because it's all I had," Davis responded.

Police recovered the bicycle, but not Davis' other belongings.

Davis testified his vision is bad without his glasses, but he was adamant Mouse is the person who stole his belongings.

Matt Reid, one of Mouse's attorneys, wanted to know how Davis could be certain if his glasses weren't on during the incident.

"I can't read that sign back there, but I can tell you it has red on it," Davis said about a sign posted at one of the courtroom doors.

Sam Hall, Mouse's other attorney, said his client was high on methamphetamine for a few days and committed acts he shouldn't have. He urged the jury to sentence Mouse based on the current case and not his past acts.

Mouse declined to make any statements before the judge sentenced him.

Karren sentenced him to 40 years in the Arkansas Department of Corrections. The decision rested with Karren whether Mouse's two prison sentences would be served consecutively. Karren cited Mouse's criminal history and the impact his actions have had on the victims.

"I think he's a violent offender," Karren said. "I think his sentences should run consecutively."

Mouse's legal troubles aren't over. He has two other criminal cases.

Mouse is charged as a habitual offender with aggravated robbery, aggravated assault and theft of property in an August 2020 case, according to court documents.

He's also charged with commercial burglary, theft of property, breaking or entering, criminal mischief and possession of a controlled substance. He was arrested in September 2020.

Print Headline: Man gets 40 years for attack on homeless man