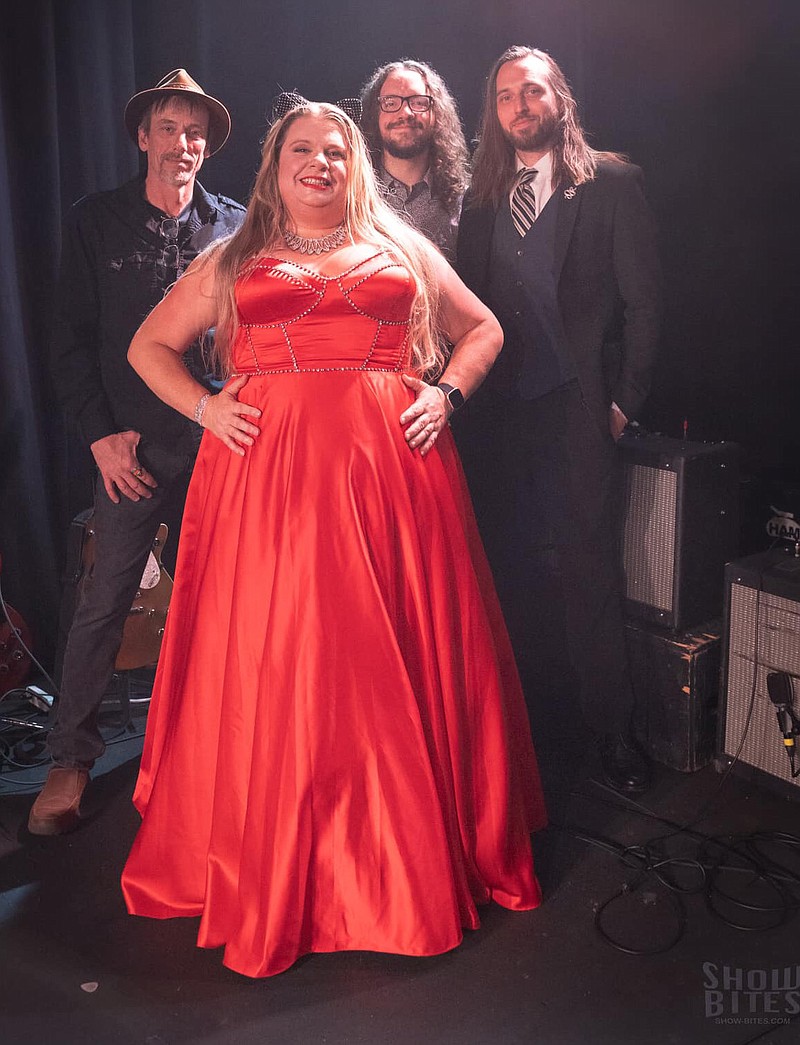 Patti Steel (front) with Rob Butler (from left), Robert Geiger and Michael Tidsdale stopped by the offices of the Northwest Arkansas Democrat-Gazette to share two of their songs, "Quarantine 2020" and "Catching My Backhand." Patti Steel Band plans to drop their album, recorded at George's Majestic Lounge, in October. (Courtesy Photo)

"I'm exhausted every day," Patti Steel admits when asked about her seemingly endless supply of energy. At any given time, she might don her cat ears or her heart-shaped sunglasses and zip from city to city playing music as a solo artist or as part of a duo or with her band.

"I'm trying to get my name out as fast as I can because I want to make a splash. I'm not the type of artist that is going to casually come into the scene. I've been in the field for a long time," she explains. The multi-instrumentalist and singer has shared the stage with countless local musicians, but she's now taking time to promote her own songs, and her own music while not wasting a second of her momentum or her strong, soulful voice. (Think Brittney Howard of Alabama Shakes -- big, brassy, bold.)

"People don't know me as a solo artist; [they know] me as like a sidekick or someone to help another musician sound better. So now it's like, 'I got to take the stance,'" she says. "Music's my biggest passion, obviously. And I don't know what to do with myself if I'm not playing music."

Propelled by her passion, it's the moment of connection with the crowd -- even if it's just one person -- that keeps Steel going despite hardships.

"I love to play on stage and look in the crowd and see at least one person smiling and having a good time. Even if it's just one person, I've made a difference for them. And that to me that means everything. So I guess that's probably how I get the energy is knowing that, because my body hurts every day. I'm constantly dealing with medical and health issues, but I don't know, I just I wake up and I'm like, 'OK, I have a show today.'"

Steel's passion for music started early in life. Her father was a rock guitarist, and although she says that he didn't push her into music, she got her first clarinet at the age of 7. From there she was in every facet of band and choir that she could get into while growing up in Webb City, Mo. However, when the band director wouldn't her to play her clarinet in the jazz band, she quit the band program despite being the first chair clarinet. While she's no longer angry at the band director, the willingness to stand up for herself and fight hasn't left her.

"That was my fight song, so to speak," she laughs. "If someone tells me no now, I'm like, "Oh yeah? I'm going to prove you wrong.' Which is what probably keeps my light going."

Steel played a couple seasons with the orchestra at Missouri Southern State University in Joplin during college, but it was jam sessions that really ignited her passion for performing and led her to many, many more instruments. On her shelves are clarinet, mandolin, guitar, bass guitar, spoons, washboard, tambourine, Kazoo, slide whistle, train whistle and nose flute, according to her website. She is also familiar with the flute, saxophone, bassoon, French horn and trumpet, to name a few more. She began learning more instruments and singing harmonies in those early jam sessions.

"I started going to like little local jams, like open mics and stuff, in Joplin. That's really what got me started to play with people and taught me how to improv," she says. "And that's been the center of my universe. Once I learned how to improv, I could sit in with anybody," which also helped her meet many of the musicians that she works with now and led her to work on many projects. She plays regularly with Chucky Waggs & the Company of Raggs, Gone So Long, Honey Shuffle, Randall Shreve, Michael Tisdale, Murray Williams and Pat Ryan Key. She's also performed with too many others to list here.

"I never thought I could have my own band. I always wanted to be in someone else's band, because I thought that's what you did ... I kept trying to be in all these bands, and trying to make myself fit in their style -- when what I should have been doing is just creating my own, which is what I ended up doing. It just took me 43 years to realize!" she laughs.

While it wasn't a straight path from college to career, Steel is finally scooping up accolades on her own. She won a Black Apple Award this year as the favorite solo musician in Northwest Arkansas. She's launched a newsletter to help people find her shows -- which are all over the place -- and she's working on her own album that was recorded in the legendary George's Majestic Lounge.

"I still teach (photography) part time. And I give music lessons on the side. But music is my main job. And then all these other jobs just fill in the gaps when I need the money," she explains. Betting on herself and advocating for herself is a new skill that she's working on.

"I didn't believe in myself until this last year, [when] I started going to counseling and getting help. Because I've had a lot of trauma over the years, and finally got to a place where I'm like, 'I deserve this. I should be here. This is good. You know, and I'm a good person,'" Steel says. "I want to help people and spread love. That's my big message. I want people to understand that. We can't be mean and hating and negative. We have those days, but we don't need to spread it ... If we spread love, the world can be a better place. And I truly, truly believe it.

"I want to make people realize they can do what they want, but they just have to make the choice to believe in themselves," she adds. "I'm living proof it can happen." 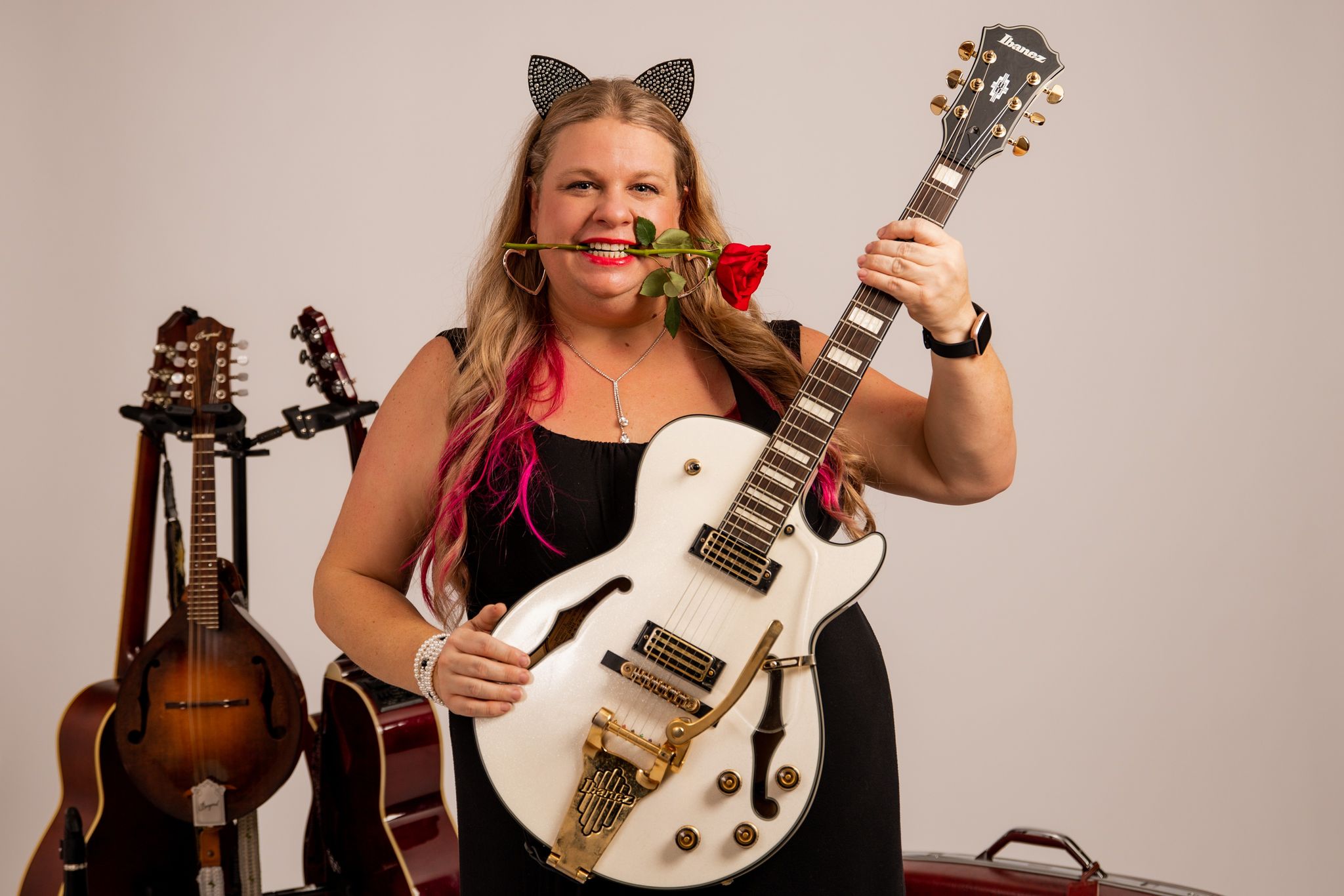 Multi-instrumentalist Patti Steel has played in support of several Northwest Arkansas musicians in the past, but now she’s on the eve of releasing her own album and is touring in support of her own music. (Courtesy Photo)
More News