PREP CROSS COUNTRY: Gimme 5 — Stories to keep an eye on during the 2022 season 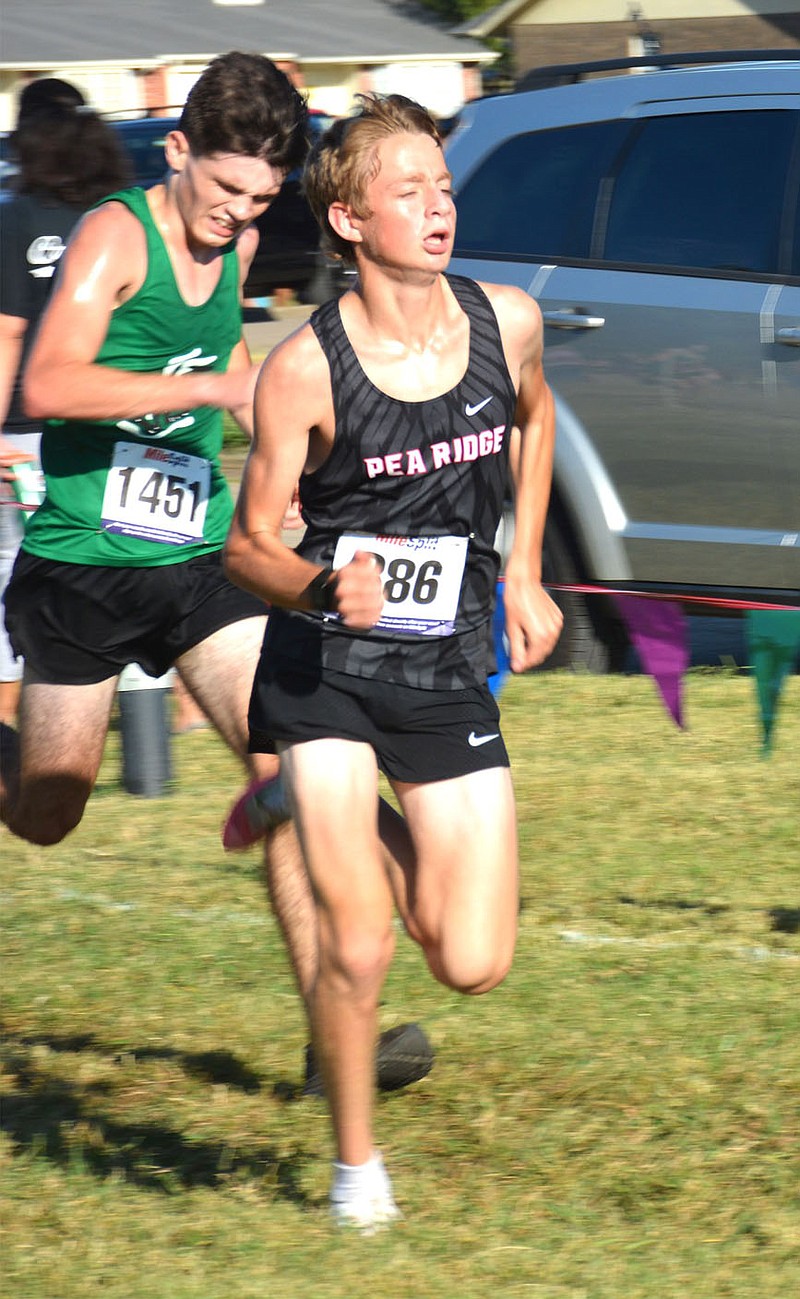 Pea Ridge's Tian Grant finished sixth in the Class 4A boys state cross country championship last year, and he returns to give the Blackhawks a chance to win their second state title in three years.

The 2022 high school cross country season kicks off with races throughout the state this week, including the annual Shiloh Saints Invitational that takes place Saturday in Springdale, followed by the Elkins Invitational and the Fort Smith Invitational the following weekend.

There are a number of interesting storylines that come into play during any cross country season, but here are five topics that should draw keen interest from local fans this fall:

It's a rare occasion when the last two state individual champions have the opportunity to run against each other during their senior seasons, and that will make things interesting any time Fayetteville's Carson Wasemiller and Bentonville's Madison Galindo step on the same course.

"Oh yeah, definitely," Galindo said. "I'm really looking forward to it. All the girls that I've met while racing, especially Carson, have been so sweet. I'm excited to spend the last year with all of them as competitors and friends. It's a really good relationship that we have."

Wasemiller set a course record during the 2020 Class 6A state championship when she covered ran the 5,000 meters in 18 minutes, 4.4 seconds and won by more than 25 seconds. She then won last year's 6A-West Conference meet at Rogers with her time of 18:58.40.

Galindo was the fifth Bentonville runner to cross the finish line at state in 2020 and finished 10th overall, and she was third in last year's 6A-West race. But she turned the tables at the 6A state meet with her winning time of 18:30.63, more than 70 seconds faster than the previous year. Wasemiller took second at 18:49.25, and that sets the stage for this fall.

"I'm not sure how many times I will run against her," Galindo said. "I knew we will at conference and at state, and hopefully at a couple of out-of-state meets. Those are the ones I'm looking forward to -- the big ones.

"I just hope the season goes well. Last track season, I got sick at state, so I'm trying to stay healthy and run my hardest. The training has been harder than it was last year, so I'm hoping I will have some faster times than last year. It's been a little more intense with a little more mileage."

Bentonville has won the state title four straight years and has three of its top five runners back from last year's group. Galindo is joined by juniors Macey Hurley and Devyn O'Daniel, both of whom finished in the top eight and earned all-state honors. Riley Ammons, another junior, finished 13th overall last year and Allison Fernstrom also finished in the top 20.

The Lady Tigers could also get a push from two transfers. Haley Loewe, another junior, finished sixth in the Wisconsin Division I state meet last year, while Ember Chariton moved to town from Utah.

Fayetteville will give the biggest push as Wasemiller is joined by junior Kayli Fitzhugh, who finished fourth last year, and senior Ashley Sexton, who was 10th.

West has been best for long time

The West -- particularly Bentonville, Fayetteville and Rogers -- has maintained a tight grip on boys cross country championships in the state's largest classification for quite a while.

Bentonville has won the last five titles and has enjoyed nine state championships since 2009. Rogers claimed seven straight titles from 2002-08 and also won state championships in 2013, 2014 and 2016, and Fayetteville earned a state crown in 2015, its first since winning four in a row from 1983-85.

The last school besides those three to win a boys state championship in the largest classification was Russellville in 2001, but it was a member of the 5A-West at that time. The last current Central school to win a state title was Bryant, which did it in 1991 and 1992.

"Part of the reason the West has been so dominant is that we compete against each other all the time," said Rogers coach Carlton Efurd, whose teams have won 20 state titles since he took over the program in 1988. "You have to perform or you're gonna get beat, and I think there's where the Central teams are now at a disadvantage.

"There is talent up here year in and year out, and you got after each other week in and week out. The competition is going to make you better."

"And Bentonville may keep winning for a while," Efurd said. "Last year, Bentonville had the best freshman class that I've seen in quite some time. They were loaded with six guys that were super talented."

Does an area tussle await?

There will be a new state champion crowned in this group this fall after last year's top two schools -- champion Valley View and runnerup Harrison -- moved up to Class 5A.

The next champion could very well come from the northwest quarter of the state since the next five finishers all hail from the area. Four of those schools -- Gravette, Pea Ridge, Clarksville and Farmington -- seek their first state championship.

Gravette had the same number of points as Harrison (111) but finished third because of the sixth-runner tiebreaker. Pea Ridge and Shiloh Christian -- which hasn't won a state title since 2009 -- were right behind at 117 and 118, respectively, followed by Clarksville (152) and Farmington (205).

Gravette has five of its top six runners returning, and that includes the defending state champion Julia Whorton. In addition to returnees Audrey Houghton, Anna Kedrowski, Celia Chermota and Aryell Flores, new coach Chris Weller likes what he sees from Litzy Garcia, who had to sit out last year after transferring to Gravette, and freshman Kiera Ralph.

"We have six girls that run with a difference of 1 1/2 minutes," said Weller, who comes to Gravette from Founders Classical Academy, where his boys won the 2020 Class 1A title. "We're really tight with runners two through seven, and that's going to make us really strong.

"Julia will lead the way, but the young girls are excited about competing and doing what it takes. They are working hard and putting in about 30 miles of work per week. They're putting in the effort and the work."

Pea Ridge claimed the state championship in 2020, its first in 35 years, then fell to the runnerup spot behind De Queen by a 78-110 margin last year.

"Being the runnerup last year has motivated this group even more," Pea Ridge coach Heather Wade said. "They have been very focused this summer and have put in a lot of work.

"This group is very driven. They fell just short of their goal last year, so they are trying to accomplish it this year."

The two Grants are among the leading contenders to push defending state champion Matthew Dunsworth of Clarksville, whose time of 16:34.16 was almost 12 seconds faster than his closest competitor and helped the Panthers earn a sixth-place finish.

Farmington returns senior Inertia Mugethi, who finished ninth last fall, but the Cardinals must replace their next three runners.

Ozark Christian's boys and Kingston's girls burst into the limelight last fall when they won their first school's first state championships, and they could be poised to repeat the feat.

Ozark Catholic has four of its top runners -- including defending state runnerup Issac Pohlmeier -- back from a team that won by a 54-69 margin last year against runnerup Ouachita. John Paul Schaefer took 14th, while Joey Squillace and Connor Lang, who were 16th and 19th respectively.

The Griffins must replace Hayden Poe, who finished seventh last year, and those duties could rest upon senior Ervin Sanchez, who finished 23rd. Ozark Catholic also picks up senior Joseph Ramirez, who ran as a freshman and a sophomore but chose to sit out last year.

"We had a young team last year, and that helps with building the culture we need," Ozark Catholic coach Alesia Schaefer said. "One of the things I'm just really proud of is these runners are very motivated. They not only want to improve as a team, but they also want to improve their personal records.

"They've had fun, and they're motivated. When I say highly motivated, I mean outside of practices, they are also running on their time. They have become invested in themselves. That's what makes it so much fun." 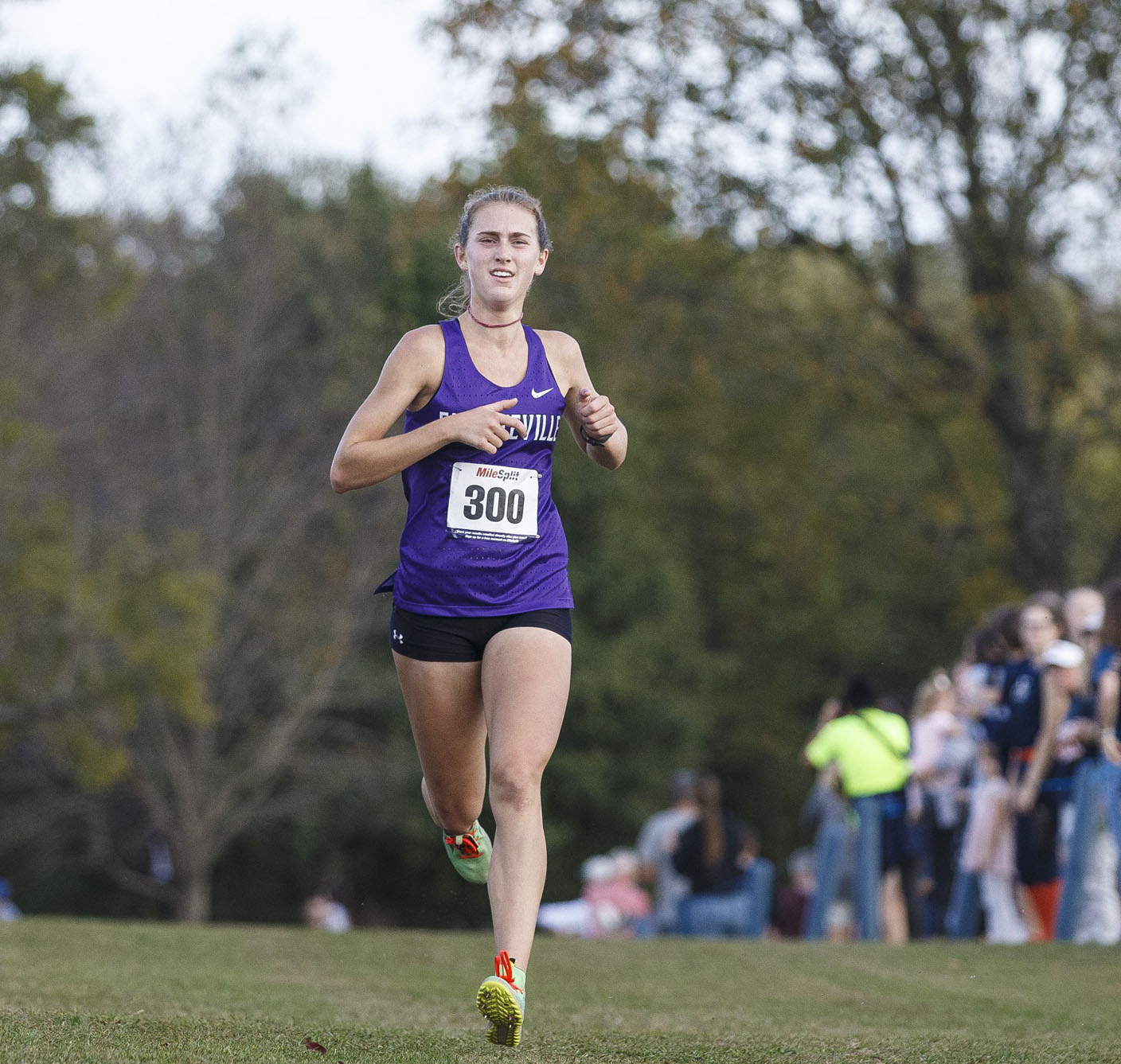 Carson Wasemiller of Fayetteville won the Class 6A state individual title in 2020 and was last year's 6A-West champion, but she finished second in the 6A state meet and hopes to return to her winning ways as a senior this season. (Special to the NWA Democrat-Gazette/David Beach) 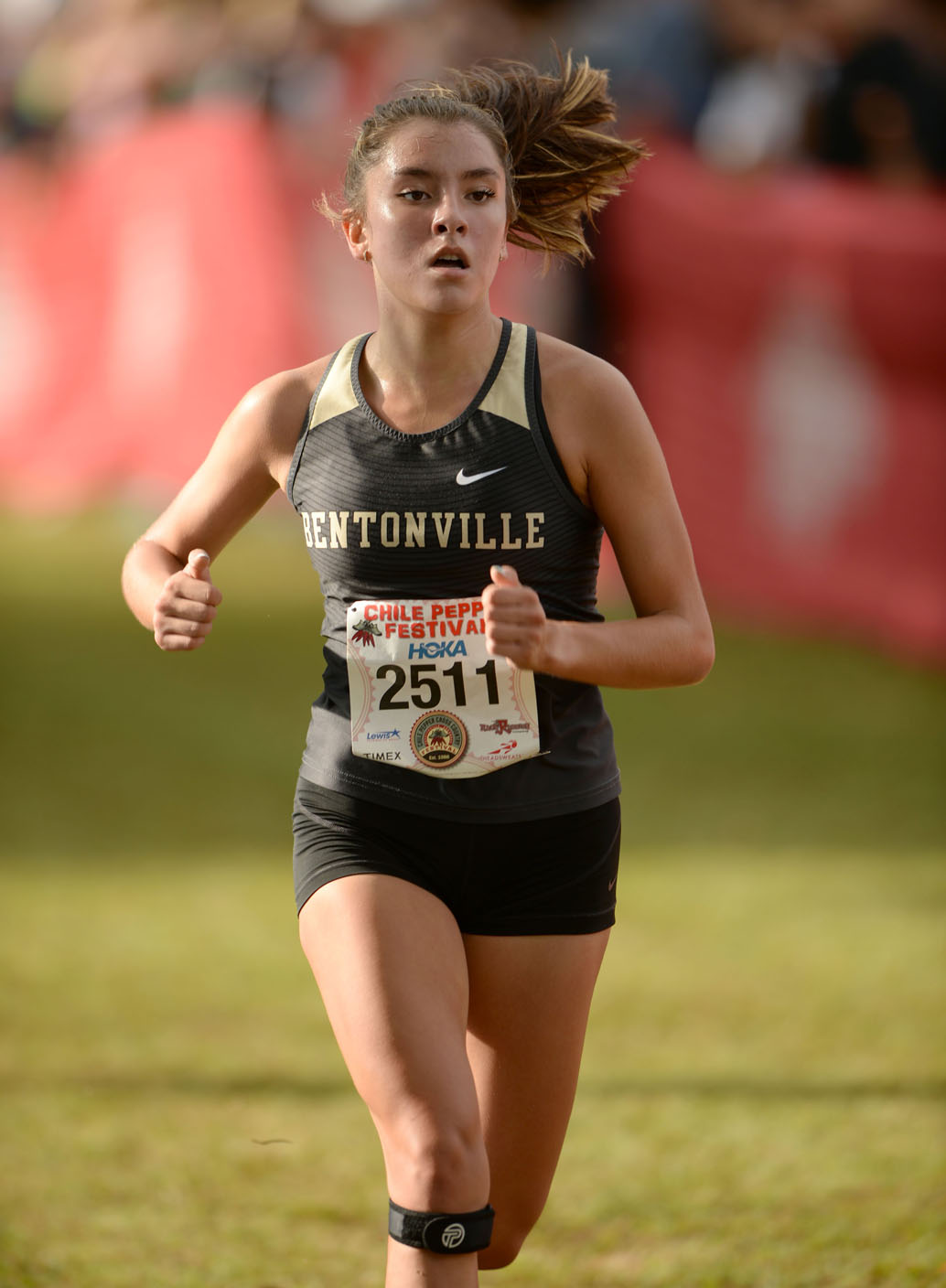 Madison Galindo of Bentonville won the Class 6A state individual cross country title and led the Lady Tigers to their fourth straight state title last season. She will try to repeat the feat during her senior season. (NWA Democrat-Gazette/Andy Shupe) 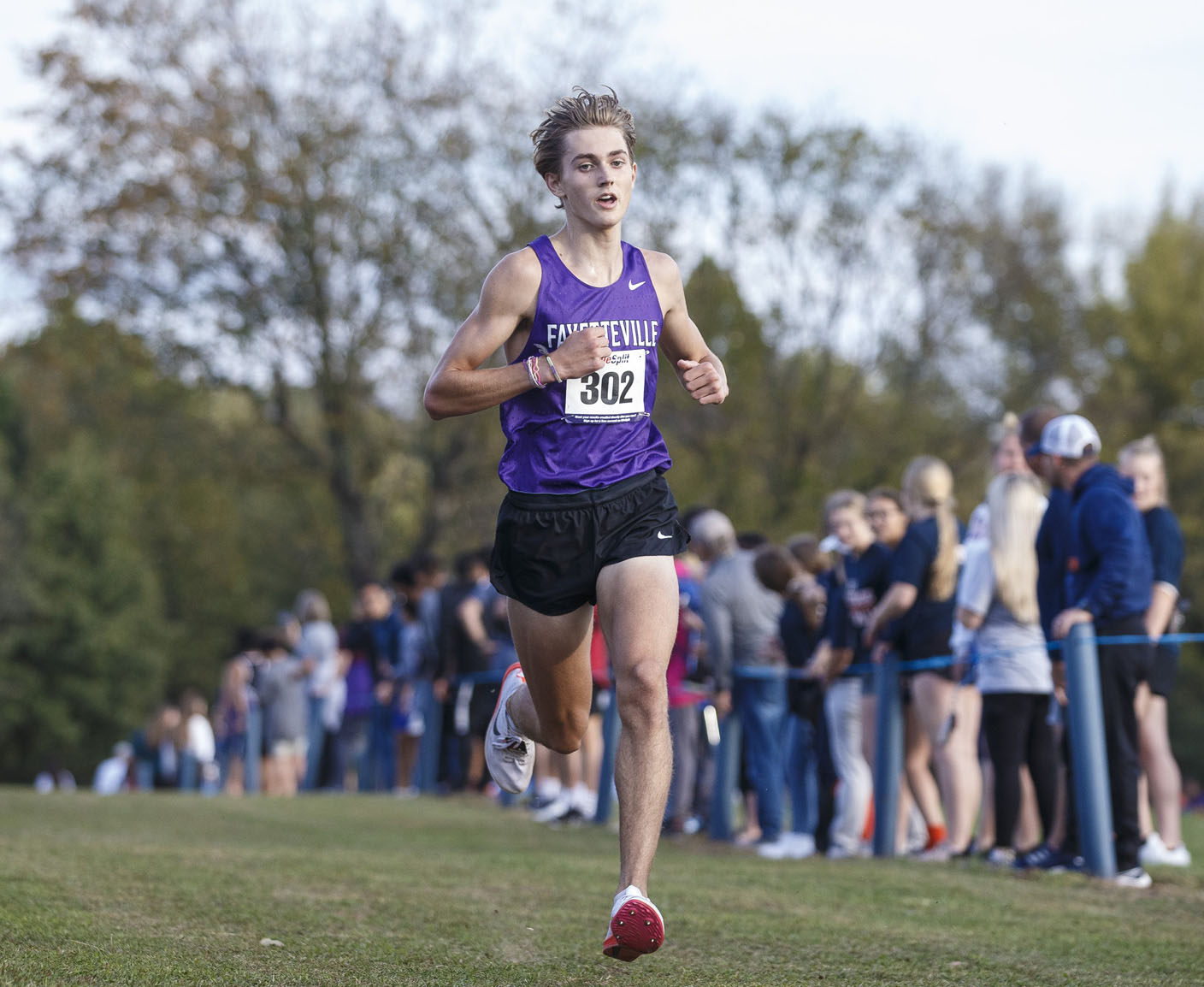 Hudson Betts of Fayetteville, the defending Class 6A state cross country champion, returns, as well as a number of talented runners throughout Northwest Arkansas this fall, making this year's cross country season something to watch. (Special to the NWA Democrat-Gazette/David Beach)
More News

WHERE THEY WILL RUN

m The 2022 cross country schedule is as follows:

University of the Ozarks Invitational, Clarksville