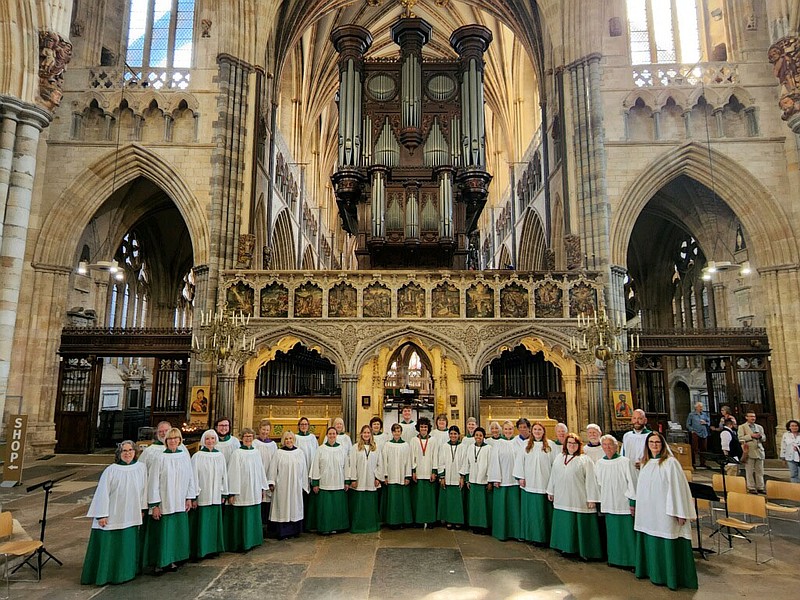 The choir from St. Paul’s Episcopal Church in Fayetteville was visiting choir in residence at Exeter Cathedral in England for a week in August and has a season of sacred song planned leading up to the church’s 175th birthday in 2023. (Courtesy Photo)

Ask any choral music lover who has visited England what his or her favorite moment of the trip was, and chances are good that this aficionado will mention experiencing the grand Anglican musical tradition: attending a sung Evensong or a Choral Eucharist at one of Britain's grand churches or cathedrals. These services -- the former includes the singing of prayers, psalms and canticles, and the latter comprises the celebration of Holy Communion -- give the choir and the organist the opportunity to enhance the worship experience by performing beautiful music, composed specifically for these services over the past half millennium.

Fortunately, music lovers in Northwest Arkansas don't need to travel abroad to experience this tradition. They can find it fully embodied in the choir and the organist-choirmaster at St. Paul's Episcopal Church, 224 N. East Ave. in Fayetteville. Not only is St. Paul's the only church in the region that regularly offers Choral Eucharist and sung Evensong, but the parish's music program spread its artistry abroad earlier this year, serving as the visiting choir in residence at Exeter Cathedral in England for a week in August.

"Three words come to mind when I think about the Anglican musical tradition," says Jack Cleghorn, organist-choirmaster at St. Paul's. "The first is value. Sacred music in the Anglican tradition evokes a unique opportunity to experience the holy. The second is quality. Outstanding musicians from the 16th century onward have composed settings of the services that rank among the most excellent pieces of their eras. And the third is accessibility. The almost magical combination of music, language, and liturgy invites participants -- the congregation, the choir, the clergy -- to sense a closer connection to the divine that one might not have experienced before."

While the music and liturgy in a Choral Eucharist follow a pattern set in place in the Roman Catholic Church well before the establishment of the Church of England in the 16th century, the service of Evensong has emerged as a distinctively Anglican contribution, a combination of two evening services, Vespers and Compline. In a sung Evensong, the choir -- led by a precentor -- sings prayers called "preces and responses"; a setting of psalm; two canticles, the Magnificat or the Song of Mary and the Nunc Dimittis or the Song of Simeon; and an anthem. Some Evensongs also include a hymn sung by the choir and congregation.

The St. Paul's Choir enjoyed the chance to become thoroughly familiar with the catalog of Evensong music during its recent residency at Exeter, an ancient city on the River Exe in southwestern England. During its one-week stay, the choir sang six Evensong services, each with different settings of the preces and responses, the psalm, the canticles and the anthem, plus one Sunday morning Choral Eucharist.

"I have to admit that we have a very capable choir," Cleghorn says, "with lots of lifelong singers and excellent musical abilities." He adds that St. Paul's has always benefited from its proximity to the University of Arkansas' excellent music program. "Two of the church's early organist-choirmasters were professors at the University," he says, "and we currently have several outstanding music students and alumni in our ranks."

On the heels of its vibrant residency in Exeter, the choir and organist-choirmaster are preparing a robust menu of musical offerings in the coming year: a performance of Maurice Durufle's Requiem on Nov. 3; a service of Advent lessons and carols on Dec. 4,; a celebratory Choral Eucharist on Christmas Eve; sung Evensongs on Sunday evenings during February and March to observe Lent; a Good Friday concert and a Saturday night Easter Vigil Choral Eucharist in April; a performance of the Mozart Requiem with the University of Arkansas Community Chorale and the choir of Central United Methodist Church on May 1; and several musical events connected to St. Paul's celebration of its 175th birthday later in May.

And the ambitious musical program will continue to grow. It has already received and accepted an invitation to be the visiting choir in residence at Wells Cathedral in England in July of 2025. For more information, go to stpaulsfay.org/music.