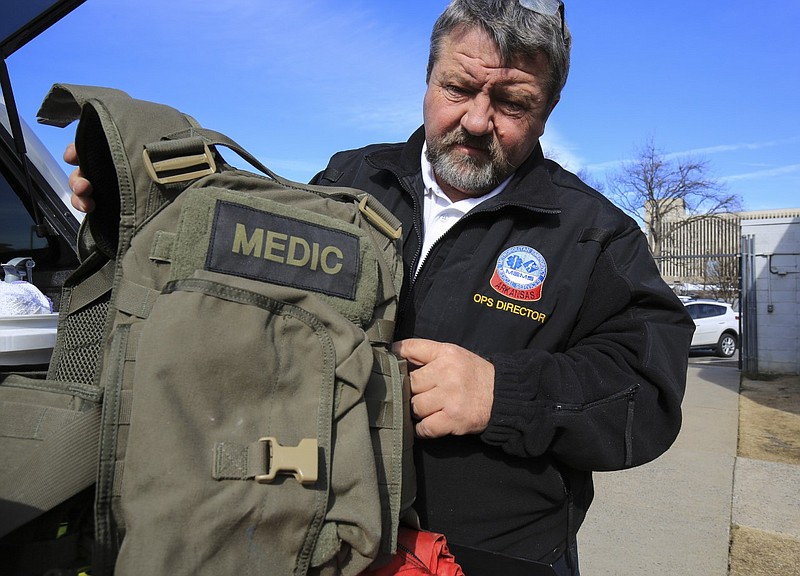 A lot has changed in the roughly 30 years of Greg Thompson's career in the first responder field.

How one went about starting a career as an EMT or a paramedic has evolved, at least in the Little Rock area.

"Years ago, when I went to EMT school, you had to go find a class someplace and take the time to go to class," said Thompson, executive director of the Metropolitan Emergency Medical Services (MEMS). "And when you got done with that, you had to go find someone to hire you. All the way back then, before anybody talked about covid, or staff shortages or anything like that, we realized that was not a good model for us, because we had no control over when people came in."

That changed in 2001, when MEMS launched its EMT Rookie Class program.

The initiative is an eight-week program that sees 12-15 candidates learning the ropes of what it takes to be an EMT.

"We were the very first place in the state to my knowledge, to say 'what would it look like [if we] brought a page from the fire and police and we hired people as rookies'" Thompson said. "They go through a process, they're tested and interviewed, we bring you on as an employee, and your first part of being employed is you go to school."

The course happens twice a year based on MEMS' staffing levels.

After successful course completion, rookies must obtain Arkansas and national licenses. Students will then be offered full-time employment and are eligible to bid for a full-time shift and be a part of an ambulance crew.

Licensed EMTs, with no experience, receive a starting base annual salary of $32,000 with full benefits; the amount increases to $34,340 after one year.

Thompson said MEMS is very close to being fully staffed, however "our call volume is increasing, so we continue to add staff to handle the increase."

"This market is harder than I've seen it in my 30 years," Thompson observed. "The school's what makes the difference for us. ... The (talent) pool only has what the pool has, right? If we're out there trying to recruit other services' people, we're not helping the system. So we want to grow them ourselves; that helps the whole system by having more people available."

Another incentive for the Rookie Class: college credit.

In 2009, MEMS partnered with South Arkansas Community College in El Dorado to provide college credit to those who made it through the program.

"While that's not required, we thought it made good sense," Thompson said. "So you're getting paid, you're going to school, you're earning a license, and you're getting college credit all at the same time and it doesn't cost you anything."

Attempts to reach out to South Arkansas Community College about the program were unsuccessful.

Once a new EMT has been with MEMS for a year, they can apply to paramedic school.

An EMT takes care of "basic life support emergencies" according to Thompson, which includes visible ailments. A paramedic takes care of thing that you can't see.

People "compete" to get into the paramedic program, which also provides credit from South Arkansas Community College.

"We pull people off the truck and they go to class for nine months, which doesn't sound like long, but it's a long time the way we do it now," Thompson said. "When I went through paramedic school, it took me a year-and-a half. But I went at night. This is all you do. You get paid as a student earning college credit."

According to Thompson, MEMS pass rate EMTs and Paramedics is more than 93% the first time and 98% by the second attempt.

Along the way, the trainees learn anatomy and physiology, medical terminology, life support and CPR.

They also learn how to deliver babies.

"She gives birth whenever we ask her to," Thompson said.