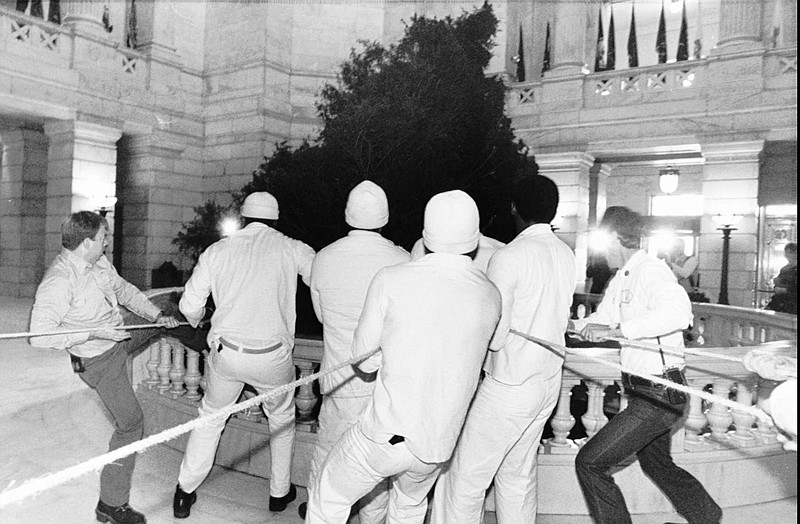 The Democrat-Gazette's Rachel O'Neal reported from the scene: "A crew of secretary of state employees, foresters and prison inmates worked for more than three hours to erect the 30-foot Christmas tree before calling it quits so more people could be brought in to help."

But first they had to drag the red cedar, which was donated by a farm in Morrilton, through the tunnel under the front steps of the Capitol and angle it toward the glass doors. The tree then stuck halfway through the doors for about an hour. After cutting off some limbs with a chain saw, removing glass windows above the doors and heaving and pulling, the crew got the beast indoors.

For the next two hours, they tried to hoist it upright from the second floor of the rotunda. Two large pieces of marble banister broke off under the pressure of the ropes. One of the pieces crashed to the first floor, but no one was injured.

The men left the tree on its side on the first floor overnight. With 15 more helpers the next day, they succeeded, and decoration commenced.

W.E. Clark, a North Little Rock masonry contractor, repaired the banister in time for the annual Capitol festivities that Friday.

The 1992 tree was not an anomaly from 1985-1995, during the tenure of Secretary of State Bill McCuen. In 1988, workers had to take the front doors off the building and lop some limbs before the 35-foot-tall, 27-foot-wide cedar was crammed inside; and then a tractor was needed to raise it. In 1990, the 31-foot, 35-year-old tree donated by Bob Hobbs of Cabot required some minor limb repairs after its difficult entrance to the rotunda. In 1991, the tree was 41 feet tall.