PREP FOOTBALL: Bentonville advances to semifinals with 45-0 victory over NLR as Brown hauls in 4 TD passes in first half 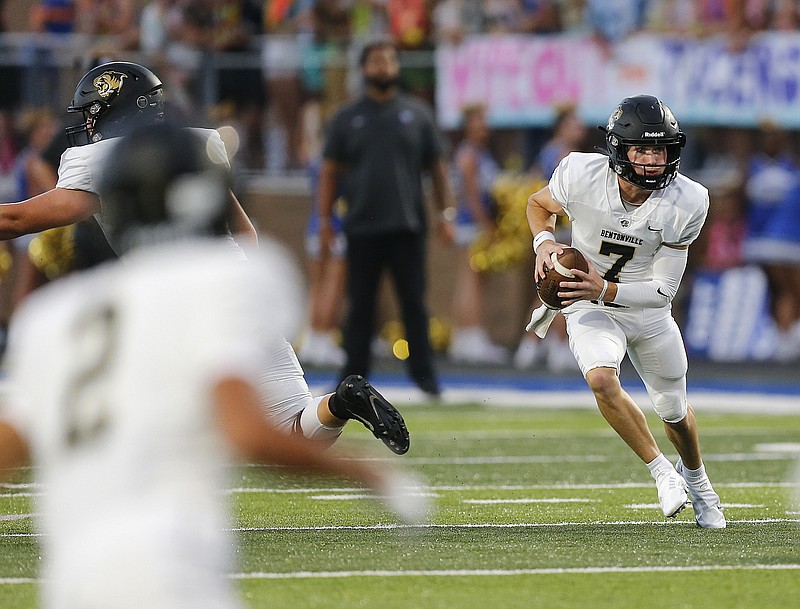 Bentonville quarterback Carter Nye (7) runs the ball during the second quarter of the game on Friday, Sept. 2, 2022, at McConnell Stadium in Conway. .(Arkansas Democrat-Gazette/Thomas Metthe)

BENTONVILLE -- Jody Grant told his Bentonville football team during a postgame speech there's not a better feeling than playing a football game on Thanksgiving week, except for that opportunity to play the following week.

Carter Nye and C.J. Brown made sure it happened, and they did it early and often Friday night. The two connected for four touchdown passes in the first half, and the Tigers hammered North Little Rock with a 45-0 Class 7A state quarterfinal victory at Tiger Stadium.

Bentonville (10-1) advances to next week's semifinal game against Cabot, which defeated Bentonville West.

"Our offense had a great challenge," Grant said. "That's one of the best defenses, especially the defensive line. They're as good as any defensive line in the state, I would think. We knew it would be tough to protect and run the ball and do some things, but we challenged our guys and told them we could do it.

"You think of the night C.J. Brown had and the way Carter operated. We didn't try to run it as much as we have been because of what we were presented defensively, but even Josh Ficklin had success running the ball. I'm proud of our guys and the coaching staff, and they put together a nice game plan and operated really clean."

Nye and Brown wasted no time in getting the upper hand on North Little Rock (6-6), a team that has ended Bentonville's season three of the past five seasons. The two elected to go deep on the Tigers' first offensive play following a Charging Wildcat punt, and the result was a 52-yard touchdown pass for a 7-0 lead with 9:36 left in the first quarter.

"Carter led me a little bit outside, and I just stayed inside and scored the touchdown," said Brown, who finished with eight receptions for 209 yards. "I wasn't really thinking about my numbers; I was more worried about getting our team the win."

It proved to be all the scoring Bentonville needed as North Little Rock managed only one first down and 9 yards of total offense. Charging Wildcats starting quarterback Malachi Gober hobbled off the field after a three-and-out on the tam's first possession and never returned.

Tyson Braddon took over, and Bentonville's defense hounded him throughout as he was dropped seven times for minus-39 yards, with Ben Pearson having a hand in three of those quarterback sacks. North Little Rock finished the first half with minus-24 yards total offense.

"I tell you what, I'm so proud of them and what they did," Grant said of his defense. "They bought into what we wanted to do, and they flew around. I don't know what the final stats look like, but I feel like our guys got after it.

"Our defensive staff has worked really hard and grinded in the film room this week. It showed. We had seen [Braddon] on film and knew he was a talented player. I hate that for their No. 4 [Gober] because he's a really good player, but that didn't change our plan. We were going to go after him, too."

Meanwhile, Nye and Brown was just getting started. The two capped Bentonville's second possession with a 16-yard touchdown pass, then connected on touchdown passes as 54 and 33 yards in the second quarter as the Tigers built a 33-0 halftime lead, with Logan Tymeson adding field goals of 29 and 38 yards as well.

Bentonville went for two after Brown's fourth touchdown catch in an attempt for the 35-point lead and force the running clock for the entire second half. That didn't work, but the Tigers' defense picked up the slack when they forced a safety after Tymeson boomed a punt and forced North Little Rock to start at its 1.