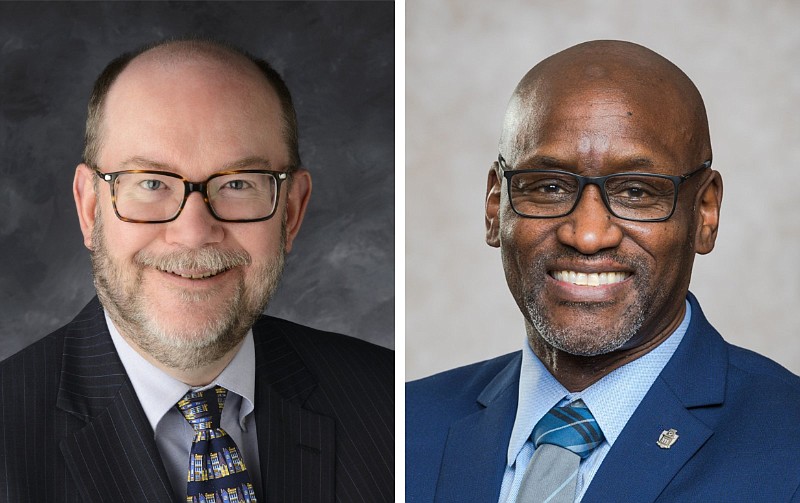 The chairman of the Board of Trustees of the University of Arkansas called a special meeting for Nov. 18 for a public vote on the next chancellor of the Fayetteville campus "because this [process] has gone on long enough."

"There's always a chance to resolve this before the 18th, but if not, we'll meet, because we need to do what is best for the people of Arkansas, for the university, and for the students and families" said C.C. "Cliff" Gibson III, the board chairman, who is from Monticello. "The public is entitled to an explanation and to know what their servants are doing."

The board held a three-hour executive session Sept. 30 and met again for two hours on Oct. 14, but reached no consensus on who should be the next chancellor at the University of Arkansas, Fayetteville.

Interim Chancellor Charles F. Robinson and the University of Utah's Daniel A. Reed are the two leading candidates. Jay T. Akridge (provost and executive vice president for academic affairs at Purdue University) and Cynthia Y. Young (founding dean of the College of Sciences at Clemson University and who would have potentially been UA-Fayetteville's first female chancellor if selected) were the other two finalists.

All four finalists separately visited the campus of the state's largest university for two days of meetings with students, faculty, staff and university stakeholders -- but the field has since narrowed to Robinson and Reed.

Donald Bobbitt, president of the University of Arkansas System, and board of trustees members have received several letters advocating for Robinson to be selected as the next chancellor.

Supporters include Matthew J. Shepherd, Republican speaker of the Arkansas House of Representatives and the Arkansas State Representative for District 6; William Dillard II, chairman and CEO of Dillard's Inc.; Johnelle Hunt, co-founder of J.B. Hunt Transport Services with her late husband Johnnie Bryan Hunt; businessman Ben Hyneman, an alumnus of UA-Fayetteville and former UA System trustee; Dr. Stephen Broughton and Mark Waldrip, both former chairmen of the UA System board of trustees; Leslie Yingling, assistant vice chancellor and associate Dean of Students at UA-Fayetteville, who was taught by Robinson as a student; the National Pan-Hellenic Council -- a collaborative umbrella council composed of historically African American fraternities and sororities -- at UA-Fayetteville; and UA-Fayetteville's Interfraternity Council.

In his letter, Shepherd lauded Robinson for "intentionally connecting" the university to all corners of the state, praised his "impressive ability" to communicate with legislators and others, and cited his long history on campus that allows him to understand the university in a way an outsider would not.

Dillard noted he "seldom" expresses his opinions publicly about the university, but in this case, he felt compelled to say "the best course for the university" is to stay with Robinson as chancellor. Dillard wrote that the university has overcome myriad obstacles and enjoyed plenty of success under Robinson's "great leadership," including taking concrete steps to control the cost of college for students and their families, he has "great vision" for the university, and he's demonstrated "unconditional loyalty" to the university.

Waldrip wrote that Robinson possesses "a unique ability to solve problems and to unite the various constituencies on campus." Broughton wrote that Robinson is "significantly the best fit" for the job among the chancellor finalists -- and that choosing him for the position would be an example of rewarding "excellence" in one's performance, which sends a positive message to other university employees. Hyneman wrote that Robinson has made grand strides in recruiting students from all over Arkansas to the university while controlling expenses in order to keep costs reasonable for students who attend UA-Fayetteville.

Hunt wrote that after meeting Robinson for lunch, she does not believe "I have ever been more impressed with any individual I have met," she's "never heard anyone make a negative comment about him or his performance," and he "loves people and genuinely cares."

Sophomore Harry Adams said Thursday he hasn't followed the chancellor search closely enough to form a strong opinion, but Robinson is "definitely" the clear choice among those in his circle of friends who have paid close attention, and he was very impressed by Robinson when he spoke at a remembrance ceremony for one of his friends.

"A friend of mine passed last semester, and [Robinson] spoke at the remembrance ceremony," said Adams, a political science major. "He was very respectful -- he had a lot of good things to say -- and it didn't feel like he was just checking off a box on his planner," but, rather, that he genuinely "cared."

Though not a current student, Kellan Munden spends plenty of time on campus with students ministering to their spiritual needs as the college women's coordinator for University Baptist Church, and she believes Robinson "has done a great job" as interim chancellor.

"It hasn't been perfect, but it never is," and Munden is grateful for Robinson's support for organizations like Cru, a Christian community on campus, she said Thursday. Though relatively small in numbers, Robinson took time to speak at a Cru meeting, which was "kind of him," and he talked about how religion can play a role in student success and retention.

"He really cares about students and making sure they feel loved and seen on campus," she added. "That was my only personal interaction with him, but I enjoyed it."

Dr. Terry Burns, who grew up with Reed in rural northern Arkansas, sent a letter of support for Reed, noting he boasts "impeccable credentials," a capacity for work "few can match," and is "a good person" with no "skeletons in the closet or hidden vices."

Reed has been publicly endorsed by Steuart Walton, grandson of Sam Walton -- the university's business school is named after the Walmart founder -- who wrote an op-ed piece in Thursday's Arkansas Democrat-Gazette citing Reed's ability to lift the university's research endeavors to greater heights.

Walton, co-founder of Runway Group, a holding company that invests in real estate, hospitality, and other businesses in Northwest Arkansas, wrote that he and his family favor Reed as the next chancellor, as Reed's tenure working at Microsoft provides him "knowledge of how to build a pipeline for applicable and marketable academic research [that] will undoubtedly open new pathways for resources, opportunities, and talent at all levels."

The chairman declined to say his choice for chancellor, and other trustees either did not return messages or declined to comment, but Trustee Tommy Boyer, a 1964 UA-Fayetteville graduate who is a member of the Arkansas Business Hall of Fame and the Arkansas Sports Hall of Fame, said Tuesday he backs Robinson for the chancellor position.

After the Oct. 14 meeting, Gibson said he was "encouraged" by progress made during the meeting to resolve the chancellor search, but he said Tuesday that optimism has dimmed in the weeks since, as the board remains divided.

"Well, you get encouraged, and then sometimes you get discouraged," he said. "That's life."

The meeting of the 10-member board will be held in person and via Zoom at 11 a.m., originating at the Janelle Y. Hembree Alumni House on the UA-Fayetteville campus. Zoom registration for the Nov. 18 special meeting will be posted before the meeting.

"The board has a great deal of information and is very carefully considering it all," Bobbitt said after the Oct. 14 executive session. "It's up to them to decide what is necessary for the institution; in the end, it's their decision, and I respect that."

Bobbitt declined to comment any further on the chancellor search Tuesday.

Last month, Robinson chose to remain in contention for the chancellor's position, rather than accept a return to a provost role -- albeit at a salary higher than he currently earns as interim chancellor, and with different and enhanced duties from his previous stint as provost -- when offered by Bobbitt, who favored Reed over Robinson for the chancellor role, according to an email from Robinson to Bobbitt. The email was first reported by the Arkansas Times.

In Robinson's email to Bobbitt, Robinson wrote that returning to a provost position "would not be the right professional pathway for me," and "it is my hope that the board will support my candidacy."

Before being named interim chancellor in August 2021 after acting Chancellor Bill Kincaid -- who was named to that role after former Chancellor Joe Steinmetz officially resigned June 18, 2021 -- returned to his role on campus as senior managing associate general counsel, Robinson was provost and executive vice chancellor for Academic and Student Affairs at the university.

Robinson began his career at UA-Fayetteville in 1999 as an assistant professor of history, and during his time as vice chancellor for student affairs, Robinson led a major restructuring of the Division of Student Affairs, positioning it to focus more on student success initiatives, according to the University of Arkansas System. He also led institutional efforts regarding diversity recruitment and retention of students and faculty while developing new academic initiatives and development goals.

Under his leadership, the university constructed Adohi Hall, a $79 million campus project that is the only residence hall in the United States to use cross-laminated timber, according to the University of Arkansas System.

His research and teaching focuses on Southern history and race relations, African American studies, sexuality in history and civil rights, among other topics, and he's earned a number of awards for his teaching, including the Fulbright College Master Teacher Award, Arkansas Student Alumni Board Teacher of the Year and an induction into the university's Teaching Academy.

Reed, an Arkansas native who still has relatives living in the state, earned a bachelor's degree in computer science at Missouri University of Science and Technology and a master's and Ph.D. in computer science at Purdue University in Indiana. He was the corporate vice president for technology policy and extreme computing for Microsoft, where he focused extensively on cloud computing technology, but the preponderance of his career has been spent in academia, and he is the presidential professor of computational science at the University of Utah.

At Utah, Reed helped launch the For Utah scholarship -- which diversified the student body and broadened access for first-generation students -- and spearheaded the 1U4U cross-campus research initiative, according to the UA System. Previously, Reed was the university chair in computational science and bioinformatics and professor of computer science, electrical and computer engineering and medicine at the University of Iowa, where he was vice president for research and economic development.

Reed was the founding director of the Renaissance Computing Institute at the University of North Carolina at Chapel Hill, with joint faculty appointments at Duke and North Carolina State University, and he also served as the chancellor's eminent professor and vice chancellor for information technology in Chapel Hill, according to the UA System. Before that, he was head of the Department of Computer Science at the University of Illinois at Urbana-Champaign as well as director of the National Center for Supercomputing Applications.

Print Headline: Decision set next week on next UA chancellor