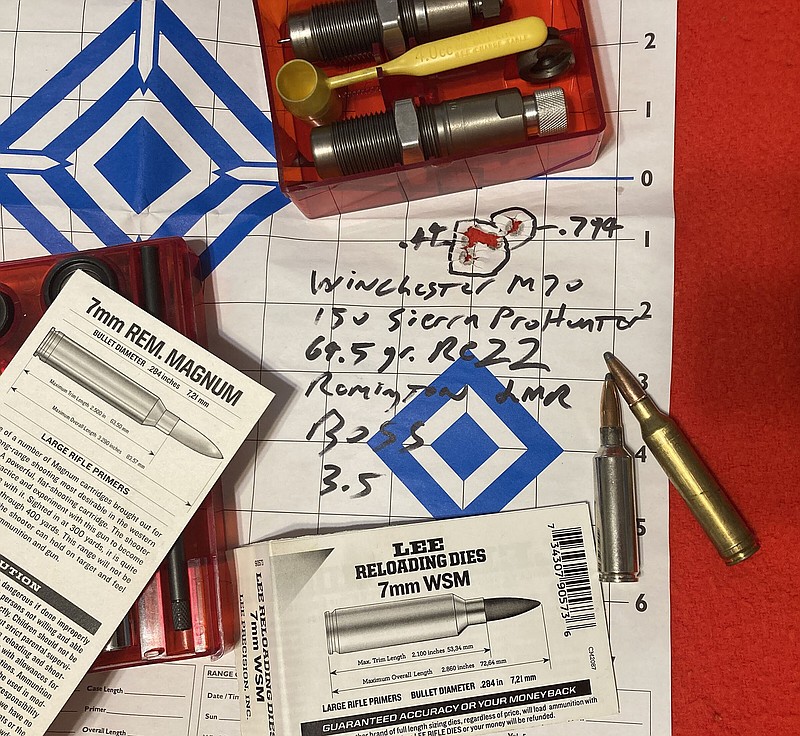 We ask, what's in your gun case Saturday for the opening of modern gun deer season?

We start with a friend who was very much looking forward to using her Pre-1964 Winchester Featherweight in 30-06 for her first deer hunt. It's a light, hard-kicking gun with a metal buttplate. It kicks too hard for her, so she sold it and bought a Steyr bolt-action rifle chambered in 300 Winchester Short Magnum. That's more powerful than a 30-06. It's closer to a 300 Winchester Magnum, the original, with the belted cartridge. The Steyr's stock and pad diffuse recoil effectively. She shoots it well and loves it.

Personally, we have a lot of cards in our wallet, but we keep reaching for a Winchester Model 70 Pre-1964 Classic Stainless Stalker chambered in 7mm Remington Magnum.

The shooting industry is awash in new cartridges developed to sell new rifles. The 7mm PRC is the latest. As it does with every new cartridge, the shooting media is gushing over it, but all it does is duplicate 7mm Magnum ballistics. There is a notable difference. Most of the cartridges introduced in the last 10 years are designed to shoot really long bullets with super high ballistic coefficients. The barrels for guns in the new cartridges like 6.5mm Creedmoor, 6.5 PRC and 7 PRC have barrels with longer twist rates that stabilize long-for-weight bullets.

For that reason I only load Hornady ELD Match bullets in my 6.5 Creedmoor, a souped-up Remington 700 5R. With the departure of my much used Ruger M77 in 6.5mm Swedish, I no longer have a rifle that's suitable for my vast collection of older bullets like Remington Core-Lokt, Nosler Ballistic Tip, Nosler Accubond and Sierra GameKing and ProHunter.

That takes me back to my Winchester 7mm Magnum. I replaced the black composite stock with a blue/silver laminate thumbhole model. I call it my Dallas Cowboys Special. I sanded the barrel channel until I eliminated all wood-to-metal contact.

The barrel is fitted with Winchester and Browning's patented Ballistic Optimizing Shooting System. It's a barrel weight that you can adjust for any size or style bullet to synchronize the barrel oscillation to be at the center of the sine wave when the bullet exits the muzzle. I've tuned it to shoot a half-inch or less at 150 yards with all kinds of old-school bullets from 140-175 grains with a variety of powders. It does best with 150-, 160-, and 162-grain bullets.

The BOSS has an integral muzzle brake which reduces recoil by at least 30%. That, along with its gilt-edge accuracy, makes it a pleasure to shoot, and deer don't run away from it the way they sometimes did from the Swede.

It's close to perfect but it has a rival, a Browning A-Bolt II composite Stalker in 25-06 Remington. It has a BOSS, as well, and it will print a half-inch or better with 100- and 110-grain bullets. It does best with Barnes TTSX copper bullets. The BOSS takes the recoil down to 223 Remington level, which is a big reason why I shoot it so well.

Regrettably, that rifle's 20-inch barrel siphons off enough power to reduce it to hot 257 Roberts+P levels. That's plenty for southern white-tailed deer, but it does not shoot as flat at long distance as my Browning A-Bolt II Medallion in 25-06 Remington with a 26-inch barrel. That's a pretty gun whose long barrel is unwieldy for the tight confines of a box stand.

Ultimately, we are inextricably partial to the 7mm cartridges. The number 7 is pretty. It sounds pretty. It looks and sounds classy, and it rolls nicely off the tongue in any sentence.

Truth be told, our absolute favorite is our Remington Model 700 BDL in 7mm-08 Remington. Remington did not chamber the BDL in 7mm-08 for very long, so collectors lust over it. In addition to its movie star looks, I love how accurate it is with 130-gr. Speer boattails and IMR-4064 powder.

The 7mm-08 duplicates 7mm Mauser ballistics with a shorter case. The 7mm Mauser evolved around heavy bullets, ideally with 175-gr. It's a slow load that packs an incredibly potent punch. Walter Bell, a legendary ivory hunter, used it to kill untold numbers of elephants.

The 7mm-08 excels with lighter bullets. It's light on the shoulder without a brake, and as with the 7mm Mag., deer don't run away from it.

I like the 7mm Mauser on paper, but not in practice. I've had a bunch of them, my latest being a Winchester Model 70 Classic Featherweight, but I've never been able to get any of them to shoot consistently. I've loaded every 7mm bullet I have for my Winchester. It's accurate enough for hunting, but it's not accurate enough to earn my trust.

And finally, there's the oddest ball of the bunch, a Remington Model 700 BDL in 280 Remington. The cartridge has no reason to exist. Ballistically, it's about the same as the 270 Winchester, a hall-of-fame cartridge. The difference in width between a 270 bullet and a 7mm bullet is .006. It's a little faster than a 270 but not as fast as a 7mm Mag, probably because most 280s have 22-inch barrels compared to 24- and 26-inch barrels endemic to the 7mm Mag.

I am quite fond of the 280 because I relate to it. It's contrarian and non-conformist, and it does its job as well or better than peers and rivals with higher pedigrees. I just wish it didn't have the ugly box magazine that offends the BDL's rakish, graceful lines.

One of those will be in my wallet Saturday. It'll be a game-time decision, but any of them will bring home the venison.