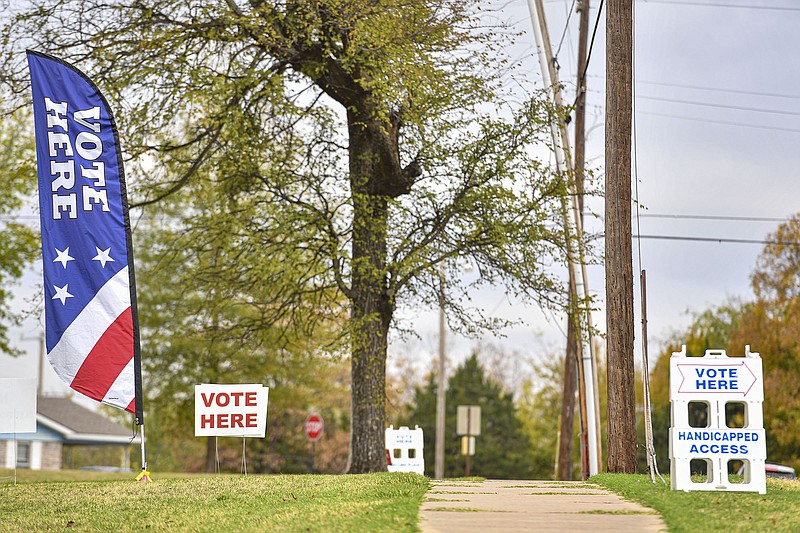 Whitaker's reelection bid put him in a rematch with 2020 Republican challenger Brian Hester in their race for state House District 22. The district now covers Farmington and parts of Fayetteville in Washington County.

Whitaker served five terms in the House before this race, winning his first term in 2012. He is a former city attorney for Fayetteville and a veteran of the U.S. Air Force. He served on the House State Agencies Committee, which played a decisive role in redrawing congressional district boundaries after the 2020 U.S. census. He ran on his experience as both a lawmaker and a former legal representative for one of Arkansas' largest cities.

Hester is a real estate appraiser from Fayetteville whose first bid to unseat Whitaker was in the 2020 election.

King first won election to the state Senate in 2012. He lost his 2018 reelection bid to Rep. Bob Ballinger, R-Ozark, but defeated Ballinger in this year's Republican primary, which required a runoff. The district's boundaries differed between 2018 and 2022. The state redraws legislative district lines after each census. King is a farmer and rancher who ran on his experience and knowledge of the district.

Wallace ran against Ballinger in 2018.

Penzo is a Realtor who first won election to the state House in 2016. Before that, he served on the Tontitown City Council for one term beginning in 2013. Penzo won the Republican nomination for this Senate bid in a primary with two opponents, winning without a runoff.

Parks is a Tontitown resident and an attorney. She ran on the platform of addressing all the needs of constituents, particularly the needs of children.

Dotson is a Realtor and home builder who won his first race for the House in 2012, after serving four years on the Bentonville City Council. This election makes him the first senator for the newly created District 34, which covers north-central Benton County. Dotson won the Republican primary over Bella Vista Mayor Peter Christie.

DeVilliers is an information technology consultant who made his first bid for public office.

Dees won the Republican Party nomination over two opponents, one of whom was a member of the state House. This is Dees first political race. He is director of business development at Simmons Foods in Siloam Springs who ran as a dedicated conservative. Dees said he decided to run after state government-imposed restrictions during the covid pandemic, in his view, infringed fundamental rights.

Peterson is a retired air traffic controller in his first election bid.

McNair served four terms in the House before this election and served for 28 years on the Alpena School Board before that. He is a lifetime resident of the district and a retired small business owner. He ran on his long-term relationship with many of the residents of the area. He also cited what he called a good working relationship with other members of the Legislature.

Hall is a farmer and former truck driver.

Breaux is a two-term House member who ran on his conservative record. He supported anti-abortion legislation and cutting taxes, he said. He retired from Alcoa Corp. and is a U.S. Navy veteran.

Tucker is a fifth-generation Arkansan who ran because farmers in the district are struggling to make a living, she said. Logan is a mechanic and this campaign was his first political bid.

District 9 is majority Hispanic, candidates said. Hodges ran as a small business advocate who said district residents want to keep more of their hard-earned money. She is a jewelry consultant who also sells real estate. This was her first campaign.

Worthen is an educator who campaigned on her experience in building bridges in the community for 26 years.

Stilling is a U.S. Army veteran who said the country needs a third political party to hold the other two in check.

There are no runoff elections in Legislative races.

Republican Mindy McAlindon won the state House District 10 race against Kate Schaffer, the Democrat. Both candidates are from Bentonville.

McAlindon is a Realtor and marketing consultant who lives in Centerton. She also serves on the Republican National Committee, which shapes the national party's platform. She ran as the dedicated conservative in the race. This was her first bid for elective office.

Schaffer is active in community groups and made her first bid for elective office.

Burkes is a real estate agent and private attorney who was previously general counsel for the Arkansas Department of Heritage. She is a conservative who knows how government works and how to stop it from growing, she said. She is also married to Aaron Burkes, chief executive of Northwest Arkansas National Airport and a former state representative.

Duke is also a niece of Gov. Asa Hutchinson, who will leave office as Duke is sworn in. Her father is former state Sen. Kim Hendren, R-Gravette. Her brother is state Sen. Jim Hendren, I-Sulphur Springs, who did not running for reelection. Her sister is Rep. Gayla McKenzie, R-Gravette, who lost a bid for state Senate this year. Duke is a real estate agent and member of the Gravette School Board.

Gill said he ran to give voters of the district a choice.

Scott Richardson of Bentonville won a state House race in his third attempt. The Republican came within 12 votes of winning in 2018 and made the party runoff in 2020. Tuesday, he defeated Democratic rival Jen Standerfer, also of Bentonville.

Richardson is director of technology at an engineering firm. He ran on conservative values and the need for more technical expertise in the Legislature to keep economic progress going.

Standerfer is an attorney who spent four years on the staff of the Legislature helping draft legislation.

This was the most contested race in Northwest Arkansas. Richardson won over four opponent in the Republican primary, a race that required a runoff. No other race in Benton or Washington county had a four-person runoff with a major party opponent waiting in the general election.

Republican Grant Hodges won his bid to return to the state House in Centerton's District 14 race against Brian Eaton, a Democrat. Hodges served three terms in the House, but chose not to run for reelection in 2020.

Hodges campaigned on his legislative experience and being more in line with the conservative views of Centerton residents. Hodges works as director of communications, government relations and marketing for Northwest Arkansas Community College, job duties that will change after his takes office, he said.

Eaton works for the litigation support at Walmart Stores Inc.

Carr is a substitute teacher elected in 2020 with the support of his predecessor, Rep. Rebecca Petty, R-Rogers. He knows the people in the district very well, having helped Petty through her campaigns and working in his own, he said. Those constituents tell him they want the sales tax on used cars eliminated, Carr said. Cars costing up to and including $4,000 are subject to the state's 6.5% sales tax plus any local sales taxes.

Cox is executive director of the nonprofit Dress for Success.

Four-term House member Lundstrum ran on her experience as a lawmaker and being a lifelong resident of Northwest Arkansas. She owns Cypress Investments, which manages rental property, and is a partner in other businesses.

Jones is director of outreach for St. James Missionary Baptist Church, where she runs the church's food bank.

Unger emphasized education of the vocational, technical variety. Arkansas in general and Northwest Arkansas in particular needs skilled workers and the people who can learn those skills need good jobs, he said. He saw the difference learning a skill made in people's lives during his career in the U.S. Navy, he said. Unger is a native of Springdale and a retired Navy captain and chaplain.

Irwin is a retired music teacher from the Springdale School District who ran, in part, out of concern teachers in the region would leave because of overwork and relatively low pay, she said.

Moore is a 12-year member of the Lincoln School Board who is president of Redeemed Construction and Renovation LLC, a development company specializing in restoring buildings. She defeated two opponents in the Republican primary. She hopes to help prepare Lincoln and other small Washington County communities in the district for the growth spreading their way, she said.