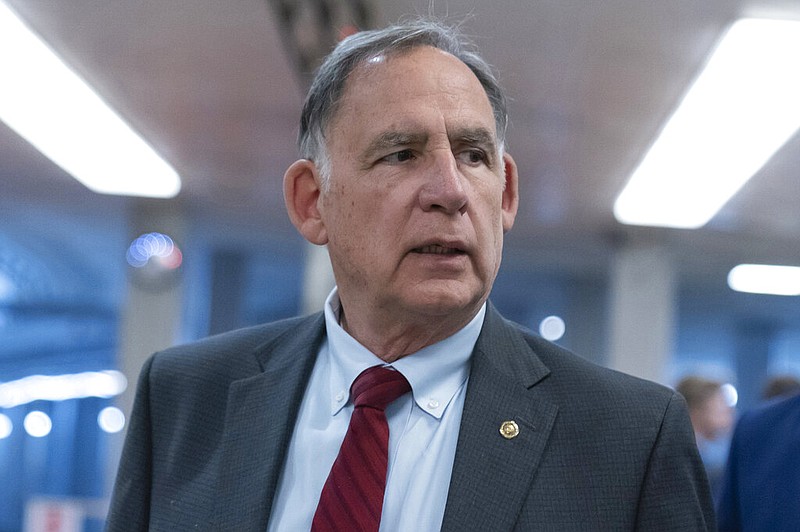 With 84 percent of the vote counted, unofficial returns were:

"We appreciate the confidence that the people of Arkansas have put in us, " the senator told the Arkansas Democrat-Gazette after declaring victory and individually greeting dozens of people who had shown up to watch the returns at the Capitol Hotel in Little Rock.

"We worked really hard," Boozman said, praising his campaign workers as well as his staffers at his U.S. Senate offices on Capitol Hill and around the state.

"I've got a great office staff that really, really understands that they're here to serve the people of Arkansas and they do a good job of that and I think it's appreciated," he said.

"We tried to run a very positive campaign, which I think we did and really talked about what we want to do in the future and how important it was, once the election's over, to come together and solve some of the significant problems that we've got going on," he said.

James, a real estate agent from Little Rock, had not conceded defeat as of 10:55 p.m.

"We still have 60% of the votes left to be counted. That's a lot. That's a lot of voices that need to be heard," she said.

The Associated Press, at that point, showed 75% of the vote was in.

She criticized news organizations for citing Associated Press vote totals rather than relying on the figures from the secretary of state's office, which typically are released more slowly.

James characterized the tally, which was released only after the polls had closed, as "voter suppression."

She spoke positively about the voters she had encountered.

"This has been amazing for Arkansas, the growth [and] the motivation that the people have shown that they're ready and eager to have change and to make sure their voices are heard," she said.

Cates said he was glad he had run.

Boozman, 71, is a former optometrist who served on the Rogers School Board and the Benton County Fair Board before winning a seat in the U.S. House of Representatives in late 2001.

After 21 years of service on Capitol Hill, he is now the dean of Arkansas' congregational delegation.

In the event Republicans recapture control of the Senate, Boozman, the ranking Republican on the Senate Agriculture, Nutrition and Forestry Committee, is in line to become its chairman.

He would be the second Arkansan to hold the post; U.S. Sen. Blanche Lincoln, a Democrat who Boozman defeated in 2010, was the first.

Bequette portrayed Boozman as a career politician and attempted to portray him as a "Republican in Name Only."

Those efforts were undercut by former President Donald Trump, who gave Boozman his "Complete and Total Endorsement!" and by Trump's former press secretary, Gov.-elect Sarah Huckabee Sanders, who praised Boozman for having a "big heart and selfless commitment to service that's hard to find in DC ..."

Facing Bequette, Hot Springs gun range owner Jan Morgan and Stuttgart pastor Heath Loftis, Boozman captured 58% of the May 24 primary vote, enabling him to advance to the general election without a run-off.

Boozman outraised all of his opponents. As of Oct. 19, his campaign had total receipts of $7.4 million, according to the Federal Election Commission.

Sanders, who served as Boozman's campaign manager during his 2010 race against Lincoln, has credited him with helping to "pave the way for conservatives in Arkansas."

In an interview, Boozman described the state's evolution from Democrat to Republican as "amazing."

Earlier in his time on Capitol Hill, "I was the only [Republican] official higher than county judge in Arkansas. We were one of the most Democratic states in the country. But we were a very conservative state so that's transitioned now to a very red state," he said.

Boozman indicated a willingness to work across partisan lines to accomplish things for the state.

"I'm a guy that wants to get things done," he said, vowing to do so in a way that is consistent with "Arkansas values and conservative principles."

He highlighted his efforts to improve lives for Arkansans, particularly veterans and farmers.