OPINION | REVIEW: The Room Where It Happens: Paul Oakley Stovall shines as Washington in ‘Hamilton’ 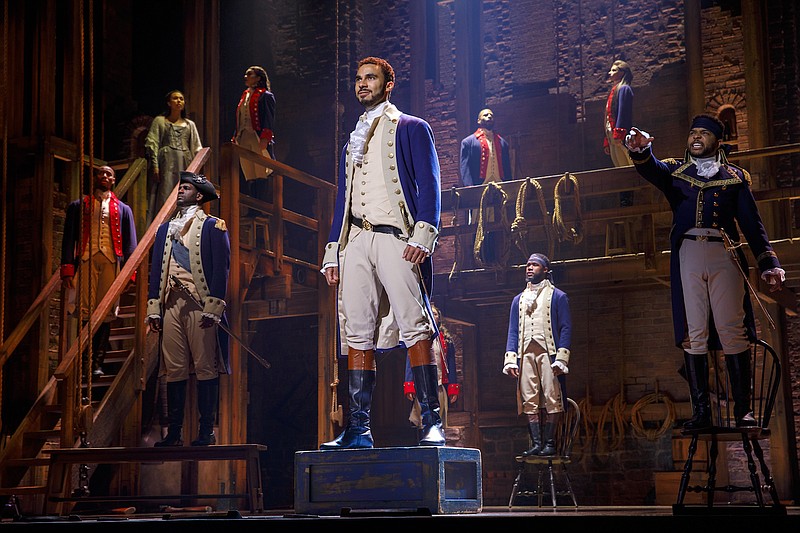 Paul Oakley Stovall, who plays George Washington, told the Arkansas Democrat-Gazette: “It doesn’t matter to me if I was doing it out in a field with three people and two microphones and just a piano — this story is so strong, it’s important to get it out there. And it’s one of those pieces that survives time. It’s gone through several presidents; it has a different meaning to society as it goes on. That’s the mark of a classic.” (Courtesy Photo/Joan Marcus)

"Raise a glass and tell the story of tonight!"

The excitement walking into "Hamilton" at the Walton Arts Center Wednesday evening was palpable. As the Baum Walker Theater filled prior to the show, people snapped quick pictures of that infamous, rough-hewn wooden stage that would transform into early America in front of our very eyes.

As the lights went down and the room grew quiet for King George's request to silence our cell phones, my anticipation grew. As there's no bad seat in Baum Walker, I couldn't wait to see the ensemble, the actors and the turntable in action. It was definitely worth the wait. In that smaller space, the action felt closer.

Paul Oakley Stovall, who plays George Washington, told the Arkansas Democrat-Gazette: "It doesn't matter to me if I was doing it out in a field with three people and two microphones and just a piano -- this story is so strong, it's important to get it out there. And it's one of those pieces that survives time. It's gone through several presidents; it has a different meaning to society as it goes on. That's the mark of a classic."

That different meaning brought to mind Ukraine as Washington, Lafayette, Hamilton and the cast sang: "We're out-gunned/Out-manned/Out-numbered, out-planned." From that moment, Stovall transformed into a father figure to all on stage, and even Edred Utomi as Hamilton seemed to blossom when Washington appeared on stage. Their dynamic is powerful.

Josh Tower's softer delivery of Aaron Burr made him more sympathetic than the Broadway actor's performance. Tower's depiction of Burr, even when it came to the duel, seemed more in balance with Utomi's Hamilton. When Burr doesn't take the right shots, his hesitation was apparent.

From her first "Eliza!" to her last gasp, Zoe Jensen shone as Eliza. She carried the role beautifully, and I doubt there was a dry eye in the house when she says goodbye to her son and when finally she held Hamilton's hand again. Also, she wasn't outpaced by Angelica at all in this production as was the actress on Broadway. Eliza had more agency and came across stronger than Angelica -- no disrespect to Stephanie Umoh! Considering Eliza Hamilton's often overlooked contributions to our country, it was nice to see her take a front seat in this show before taking that last gasp.

David Park and Tyler Belo were an absolute delight as Lafayette/Jefferson and Mulligan/Madison, respectively. Park was an absolute joy to speak with ahead of his performance in Fayetteville. It was lovely to see how well he rapped and danced and switched from a stoic, honorable Frenchmen to the over-privileged, snobbish Thomas Jefferson. Belo's percussion in the beginning of the play was flawless, his delivery as Hercules Mulligan having that perfect raspy rhythm that makes him so fun to listen to. He was almost unrecognizable as the stiff, conniving James Madison in the second half.

The ensemble and Peter Matthew Smith as King George deserve praise as well. Smith had the audience rolling between scenes. The ensemble, with the aid of that infamous turntable, gave the show a cinematic look. In the cozy space, it almost felt like we were moving with the ensemble. While I hate to point out that the Walton Arts Center stage is smaller, it was an asset for "Hamilton." I really felt like I was "in the room where it happens."

Like Stovall said, "Hamilton" is a classic piece of American theater. We are so lucky to have it in Fayetteville.