Cartridge’s road to market a long one 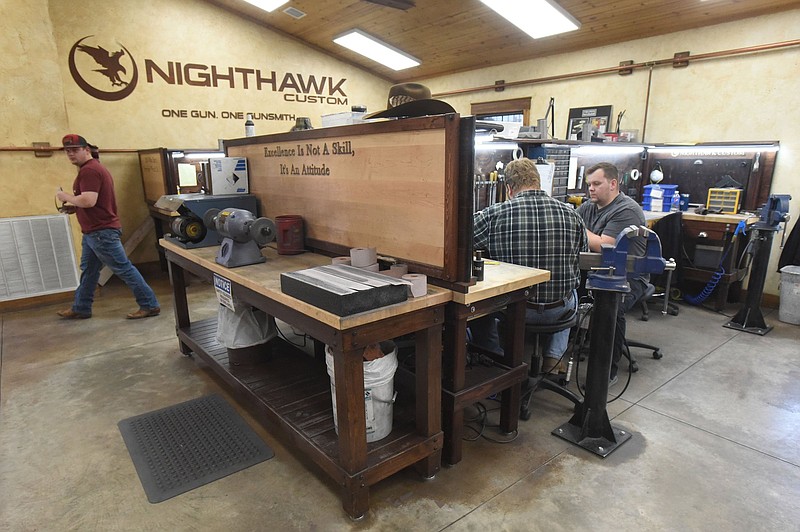 When Federal Premium Ammunition came to Berryville-based gun maker Nighthawk Custom with a proposal in late December of 2019 things were slow in the firearms industry and no one was even thinking about covid-19.

The pitch from Federal was simple -- help them develop a new pistol cartridge aimed at the concealed carry market, along with handguns that would use the chambering when the new round hit the market. The reasoning was also clear, the concealed carry market was the only real bright spot in the industry at the time and the 9mm cartridge, the king in that category, was getting a little long in the tooth at well over 100 years old.

Federal's new cartridge, 30 Super Carry, would try to rival the performance of the 9mm, but in a slightly smaller package. That would mean greater capacity in the small pistols that were dominating the market since the release of Sig Sauer's 365 pistol in early 2018. The new round would also bridge the performance gap between 9mm and .380 ACP, another popular cartridge in micro-pistols but significantly less powerful.

The companies met at the Shooting Hunting Outdoor Trade Show, commonly called SHOT Show, in January of 2020 and Nighthawk agreed to develop a prototype pistol that could operate with the new concept cartridge. Federal also began to work with firearms giant Massachusetts-based Smith and Wesson on the project.

"It's important for us to pick the right gun partners," said Jason Nash, vice president of marketing for Vista Outdoor, parent company of Minnesota-based Federal, in a recent phone interview. He said development of a new cartridge was rare, with Federal doing so only a few times in its 100 year history.

He said Nighthawk has a well-earned reputation in the industry as a premium brand and that Federal was confident Nighthawk could develop a pistol that would showcase the capabilities of the new round.

Nighthawk has been building 1911-style pistols and other custom firearms since 2004. It offers several pistol models that are further customized based on customer specifications with models retailing for $3,500 and above. Nighthawk is also the exclusive importer for Korth Revolvers and Cosmi Shotguns. The company employs about 85 workers and is growing, with recent additions to its machine shop operations.

Nighthawk signed a non-disclosure agreement with Federal and got to work.

"Things were very different then," explained Nelson Davis, chief operations officer at Nighthawk. At the time, the industry as a whole was in the doldrums and it was looking for something, anything, to spark interest and buzz.

Then covid-19 happened and the accompanying concerns about public safety, political shifts, and other issues that drove red-hot gun and ammo sales for the next 18 months or so.

Nighthawk began to develop its new pistol for the 30 Super Carry cartridge. The work required the redesign of the top end, including the slide, barrel, ejector, extractor, and recoil system for its classic 1911 style GRP entry model pistol, along with a magazine that would carry the new round. To the novice, a magazine might seem like a simple component, but it was vital for the proper operation of the pistol, Davis said.

"Magazine issues are often the culprit for functional issues in a gun," he said. "Designing a new gun for a new cartridge is impossible without having confidence in the magazine."

Davis credited Nighthawk's relatively small size for its ability to move quickly on the project and the efforts of its in house engineers and research and development teams. First, Nighthawk sent its barrel to Federal so the ammo maker could actually test the new round, then Nighthawk sent a fully-functional prototype pistol for further testing.

"We weren't going to miss that boat," Davis said.

By then the industry was shifting into high gear to meet unprecedented demand for both guns and ammunition. Retailers had few firearms left to sell and ammo stocks were exhausted. In the coming months gun and ammo companies focused on the basics, making as many high-demand guns as possible and producing as much ammunition for gun buyers both new and old demanded.

Some of those companies call Arkansas home, including gun makers Walther Arms in Fort Smith and Wilson Combat, also in Berryville. The state's ammunition makers include Sig Sauer in Jacksonville and Remington Ammunition in Lonoke, which was purchased out of bankruptcy by Vista Outdoor in late 2020.

According to the Economic Impact of the Firearms Industry report by The National Shooting Sports Foundation, an industry group, in 2020 across the U.S. there were nearly 154,000 directly employed in the sector with total wages valued at $7.13 billion.

In Arkansas there were 3,423 employed directly by the industry with an additional 3,690 jobs in supplier and ancillary industries. The average pay and benefits for these jobs stood at $46,800. According to the report, Arkansas ranked third in the nation for economic output per capita in 2020 and seventh in jobs per capita.

Davis said Nighthawk continued to work on the 30 Super Carry project throughout 2020 while the custom-gun maker continued to churn out pistols to meet demand.

By the end of 2020, Nighthawk had worked out its bugs and then entered a holding pattern through most of 2021. Vista Outdoor's Nash said Federal delayed the launch of the new cartridge until SHOT Show in January of 2022 to concentrate on other categories.

"We felt it was a good time to release," he said.

Nash said the new cartridge has been met with enthusiasm.

In response to emailed questions, Ashley Hlebinsky, president of The Gun Code, LLC, a firearms consulting company, said historically, new cartridge development was common in the late 19th and early-mid 20th century, with big names like John Moses Browning. She said wildcatter cartridges have also been developed throughout the years, however, recently new cartridges haven't been too common. She said since about 1990, it seems around 10 cartridges in the pistol category emerged.

She noted, "The .40 S&W cartridge was wildly successful upon introduction (in 1990) and swept through law enforcement departments splitting the difference between the 9mm and the .45 ACP. However, with increase in performance in 9mm projectile, the .40 S&W has become significantly less popular."

Hlebinsky said new cartridges pop-up when companies see a real or perceived gap in the marketplace. It can be related to a performance metric or a newly identified market opportunity for a gun or ammunition manufacturer.

"While always a part of the firearms market, personal protection and concealed carry significantly increased since the 1980s," she said. "Today, it is a very large portion of the firearm purchasing community. The .30 Super Carry has a solid strategy to target that market and coordinate with S&W and Nighthawk Custom to launch a firearm."

Landon Stone, director of marketing for Nighthawk said there's been a lot of interest in its products chambered in 30 Super Carry and the project has helped with the company's branding. He noted Nighthawk hosted an event for the media covering the gun industry in Berryville showing off the company's new pistols and the new cartridge.

"We got a lot of exposure. We had writers from all the big gun magazines. That was a big deal for us," Stone said.

At this point, Nighthawk offers both its entry level GRP pistol along with the more high end President model in the 30 Super Carry cartridge. Smith and Wesson offers the chambering in its Shield Plus as well as its Shield EZ pistols.

Davis said at Nighthawk the company continues to do what it does best, produce quality firearms that meet the needs of its customers.

"We'll continue to build guns and see how the round does," he said. 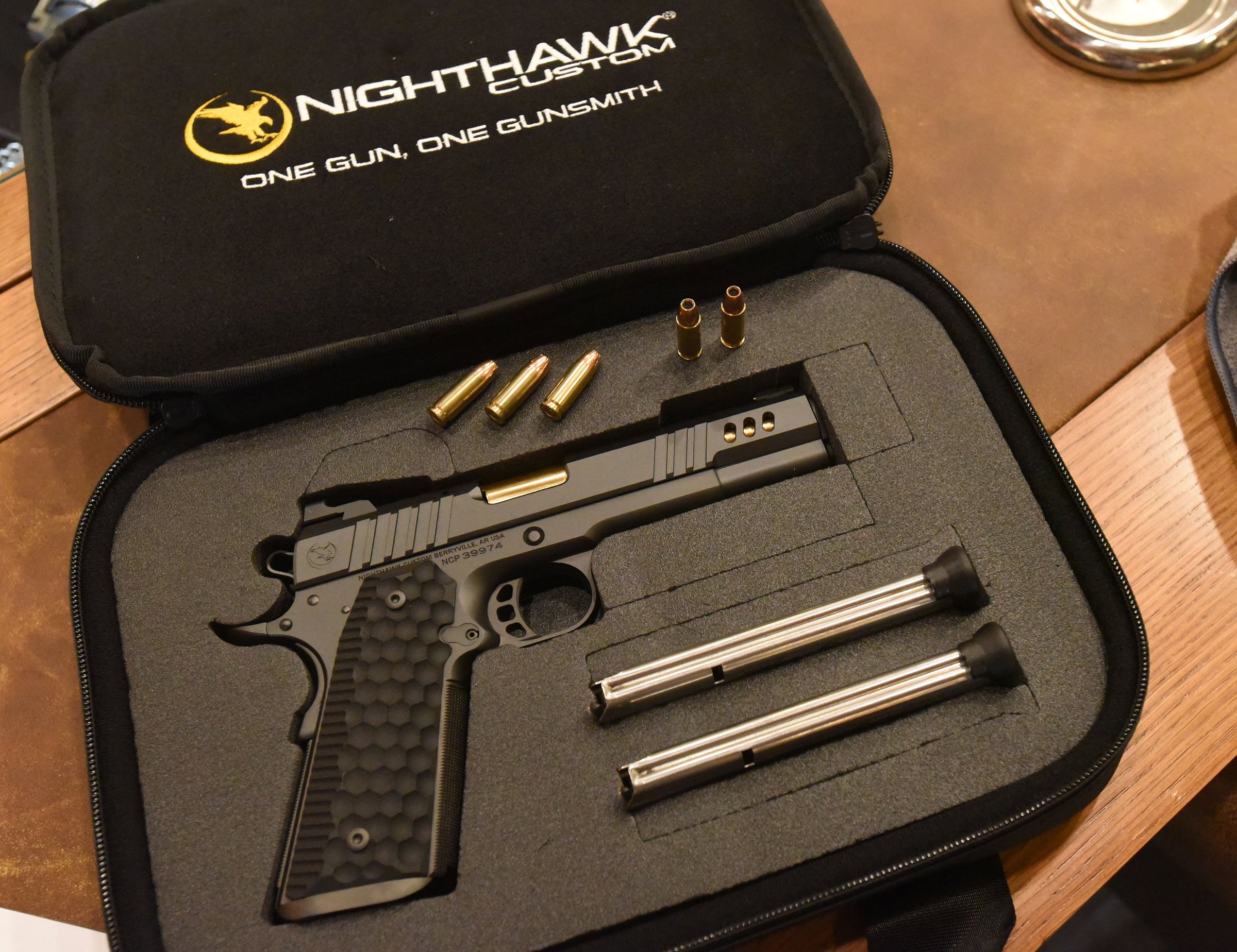 The Nighthawk Custom pistol and 30 Super Carry ammunition is displayed on March 2 2002 at the firearms company in Berryville. (NWA Democrat-Gazette/Flip Putthoff)

Print Headline: Cartridge’s road to market a long one