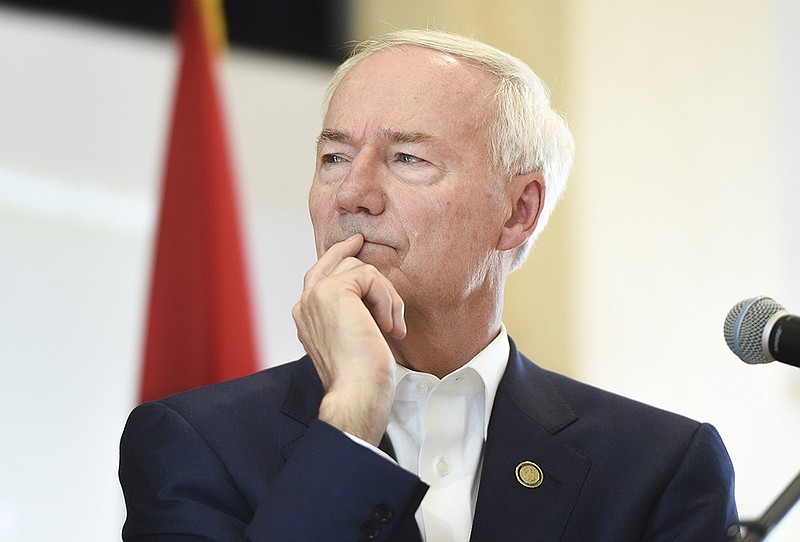 HOT SPRINGS -- Arkansas Gov. Asa Hutchinson continued to hint at a presidential run as he told a group of attorneys Wednesday that he was starting to "lay the foundation" for a 2024 campaign.

Hutchinson, speaking at the Arkansas Bar Association annual meeting in Hot Springs, talked about a range of topics, including his plans for the future.

"I am full of energy, and I am pretty concerned about our country and the direction of it and my party, and as you have all probably seen I want to be a voice of problem solving in government and not creating chaos, and so that is my mission," he said. " I am doing what is necessary to lay a foundation for 2024, but let me assure you my first priority through the remainder of my term is Arkansas."

Hutchinson, in his last year of office as governor, has previously said his decision on whether to run will be made after the November midterm elections.

"There is going to be a lot happening," the Republican governor said. "We are not going to go out into the next role in life quietly. It's going to be a very active finish to the term, and we got a lot to do. Stay tuned, and hope we can do some good things after my term as governor, and we will see where that leads."

Hutchinson, who was a lawyer for over 20 years, also told the audience he had just returned from Washington, D.C., where he spoke to foreign and national leaders about various topics including school safety.

"I also had the opportunity to review some of the school safety legislation that Congress is looking at and see how that might impact us," he said.

Hutchinson said he is paying attention to the bipartisan effort coming out of the U.S. Senate.

"There will be some tweaks in our background checks and some additional exploration for those 18 to 21, but the main focus is going to be more funding for mental health," he said.

Hutchinson said the state already allows for teachers and schools staff to carry a concealed gun if they have undergone the proper training that is required.

"We have a number of school districts that have taken advantage of that," he said.

A bipartisan group in the U.S. Senate rolled out a framework over the weekend that would expand mental health services, bolster school safety and put in place stronger gun-related legislation.

The proposal came weeks after a massacre at an elementary school in Uvalde, Texas, and a mass shooting at a supermarket in Buffalo, N.Y.

The specific legislation has not been released, but a group of bipartisan lawmakers, including 10 Senate Republicans, is backing the framework.

Hutchinson applauded the work in the Senate but said he wants to see how the ideas are framed in legislative text.

Part of the bipartisan framework would provide U.S. states with resources to create and administer so-called red flag laws, which allow a court to prevent a person from accessing guns if they are found to be a danger to themselves or others.

"Whenever you're looking at the incentives for the state to pass what they call red flag laws. We want to look carefully at that to make sure citizens' Second Amendment rights are protected. And so, we just want to look at it more closely," Hutchinson said Tuesday while in Washington, D.C.

Democrats passed federal "red flag" firearm legislation in the U.S. House last week in a mostly party-line vote. The four Republican House members from Arkansas voted against the bill, and the measure is not likely to pass in the Senate.

The bipartisan Senate proposal would also require an "investigative period to review juvenile and mental health records" for gun purchasers under 21 years old.

"It is my understanding that they're looking at being able to take a little bit extra time to make sure [you] look at the juvenile record, if that's applicable," Hutchinson said Tuesday. "And so it's hard to do that in a three-day time frame."

"So I want to get more details, but that makes some sense," he said.

Hutchinson, who serves as chairman of the National Governors Association, did not name the senators with whom he spoke.

"We had a good conversation. He's an old friend. I've known him for 25 years," the Kentucky Republican told the Democrat-Gazette.

U.S. Sen. John Boozman of Rogers has remained noncommittal on the bipartisan proposal, saying he's waiting to see the specifics of the legislation.

"We're very open, and again I know that the people that have been negotiating [on] this have worked very hard and worked in good faith," the Republican senator said Monday.

U.S. Sen. Tom Cotton declined to answer a question about whether he would support "red flag" legislation Wednesday.

Both Boozman and Cotton have been backed by the National Rifle Association in the past. Recently, Boozman ran with the NRA's endorsement in this year's Senate Republican primary. He won the primary last month.

Arkansas had the 8th-highest firearm death rate among U.S. states in 2020, according to data from the Centers for Disease Control and Prevention. The rate includes homicides, suicides and other types of deaths.

Among the 50 states, Arkansas and West Virginia tied for the 7th-highest age-adjusted firearm suicide rate that same year.

While it's unlikely the gun issue will be brought up during an anticipated special session in Arkansas, Democratic Rep. Tippi McCullough, the House minority leader, previously has said she wants to discuss raising the minimum age limit for buying assault-style rifles from 18 to 21.

Republican State Sen. Jimmy Hickey, the Senate president pro tempore, also has previously said there is no consensus when it comes to adding gun legislation to a special session agenda.

The potential special session was brought up during the bar association event as Hutchinson said it was time to use some of the state's surplus to provide relief to Arkansans, as well as financially reward teachers.

"We have a surplus as this coming June 30th of $1.5 billion. In other words we have collected $1.5 billion more in tax revenue than we need to meet our budget," he said. "At the same time the workers of Arkansas are struggling with high inflation and gas prices and we need to return part of that surplus. We need to provide tax relief, and it's the simplest way to get more money in people's pockets is to take less from them. And so that could wait until January. but gas prices are high now. There is some urgency there, and I am hoping to reach an agreement with the General Assembly so we can provide that tax relief and get more money in people's pockets."

Hutchinson said he also wants to give a significant raise in pay to educators.

"It will cost some money, but we want to raise the minimum pay and everyone's pay in terms of education," he said. "I hope that when you talk to your legislators you will support giving more money to teachers."

Hutchinson also said that during his trip to Washington he spoke to the German ambassador about conducting fighter jet training in Fort Smith. He said Germany is looking to buy F-35 fighter jets in light of the Russian invasion of Ukraine and he wants Arkansas to have a role in this process.

"I made that case, and I was glad to see that we made some progress on that," he said. "It's not only important to the U.S. military strategy, but it's also important for our economy here in the state."