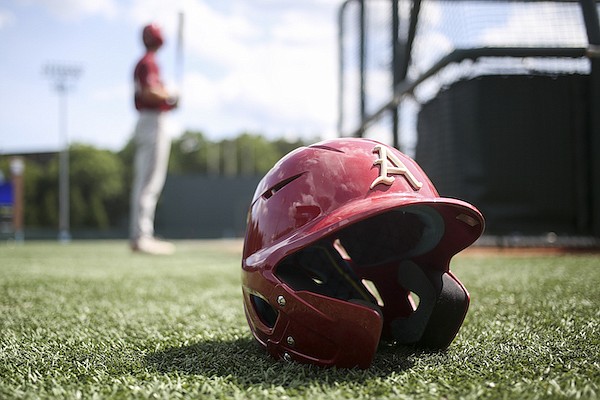 An Arkansas helmet sits on the field during practice Friday, June 10, 2022, in Chapel Hill, N.C.

With his pledge, the Razorbacks have three commitments in the 2024 class from the Jackrabbits' program.

“Ever since I’ve grown up, I’ve watched the Razorbacks,” Eaves said. “That’s every Arkansas kid’s dream to eventually grow up and play there. When I was lucky enough to get an offer, I accepted it immediately because that’s obviously where I’ve always wanted to go to school.”

When Hobbs mentioned the offer, Eaves was stunned.

“After he offered me, I can’t remember what he said after that. I was kind of in my own little world,” said Eaves, who also had an offer from Arkansas- Little Rock. “My dad and my mom was with me and obviously they were really happy.”

Lonoke set a school record by winning 29 games last season while winning the Class 4A-East Regional. The Jackrabbits fell to Shiloh Christian in the state quarterfinals.

Eaves’ fastball hit 83-84 mph as a freshman, and this past season he hit 88-91 mph. He also throws a curveball and slider.

Eaves had a 7-2 record and 1.50 ERA with 130 strikeouts in 65 innings while only giving up 7 walks for the season. Jackrabbits coach Bryan Eagle said Eaves has high character to go with a 4.0 grade point average.

“Baseball-wise he has more ability level than anybody I’ve had the pleasure of coaching in 15 years,” Eagle said. “He’s got an arm that I consider probably one of the best in the state, if not the best. He has elite control.”

Lonoke recently produced former Razorbacks infielder Casey Martin, who was drafted by the Philadelphia Phillies in the third round of the 2020 MLB Draft.

“I’ve ran with these guys my whole life and just seeing them succeed, too, puts a smile on my face,” he said. “It’s kind of crazy.”

Eaves credits Eagle and his summer coach Greg Baxendale of Arkansas Express for his development.

“He makes us work every day,” Eaves said of Eagle. “We lift every day, we throw every day. He’s one of the major reasons why I’ve had such a big jump in my velocity and my strength. Coach Baxendale is the one who taught me how to play the game, how to do it the right way and my baseball knowledge.

"He’s one of the reasons why I got offered by Arkansas.”