In Review: 'Officer and a Gentleman' deserves salutes 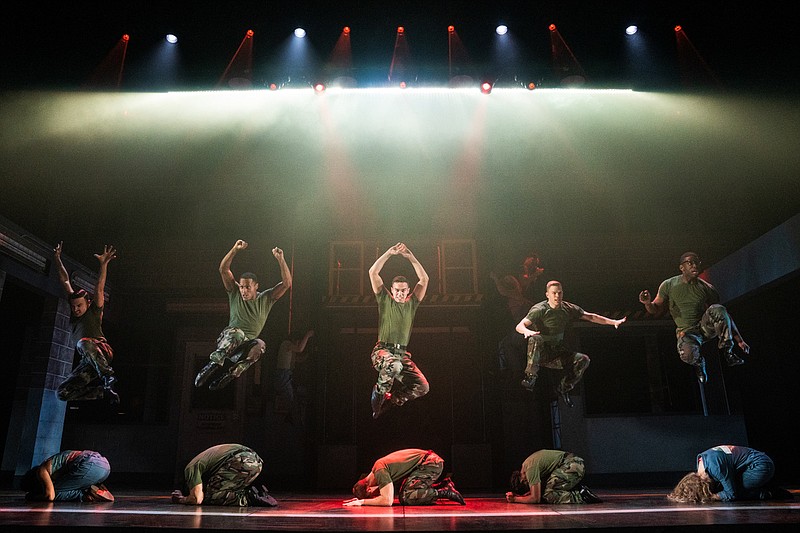 If you think musical theater takes a lot of energy, try it with burpees. Wes Williams shines at both in "An Officer and a Gentleman: The Musical," on stage this weekend at the Walton Arts Center. (Courtesy Photo/Matthew Murphy for MurphyMade)

As someone who can barely speak while walking briskly, I found it mind-blowing to watch the performers in "An Officer and a Gentleman: The Musical" at the Walton Arts Center on Tuesday evening.

Granted, musicals usually require great physical prowess from their performers, but singing while doing burpees and sit-ups is on a different level altogether. How do you use those abs for both singing AND exercise? Who do I call to help me achieve this superpower?

Wes Williams, who played the lead character, Zack Mayo, made these physical feats look effortless while acting and displaying an impressive vocal range. One of his best numbers, "Wanted Man," was a testament to his ability to both carry a tune and break a sweat as he pivoted from sit-ups to flashbacks to burpees to the present scene and then "acted" tired. His endless supply of energy and vocal range enlivened the production that is based on the 1982 film of the same name. Williams defies comparison to Richard Gere as he transforms from the scruffy all-for-himself newbie to a class leader. Both he and the cast truly made the roles their own and provided their own takes on the recognizable hits from the 1980s and early '90s.

The musical remains fairly true to the original movie but is updated to include racial issues. For instance, the love affair between Sid Worley Jr. (Cameron Loyal) and Lynette Pomeroy (Emily Louise Franklin) is further complicated by being an interracial affair. Sid tries to assure Lynette that their relationship will not face the same real-world challenges on a naval base, but they soon learn that is not true. The theme of "Be the change you want to see in the world" begins between the interactions with Sid and Lynette and is carried over in to the struggles faced by the other characters.

Another standout in this remarkable production is Amaya White, who plays Casey Seeger. Like her movie counterpart, she struggles to "get over the wall" and "be the change that she wants to see in the world," by overcoming the sexism that kept her and other women from succeeding in the Navy during the early 1980s. White more than conveys Seeger's struggle through her acting and through performing songs while doing squats and alternating lunges as she sang, "Venus" with fellow actors Mia Massaro and Emily Louise Franklin. However, White drew in the audience in the play's opening with her lilting yet strong rendition of "Higher Love." Her beautiful voice shone throughout the play and was easily recognized in every song of which she was a part. I could listen to her sing anything.

David Wayne Britton also deserves a salute for playing the role for which Louis Gossett Jr. won an Academy Award for Best Supporting Actor (the first Black actor awarded the honor). Britton served triple duty by also playing Seeger's father during flashbacks and the Admiral who is revealed to be Sid's father. In the blink of an eye, Britton moves from drill sergeant to warm and caring father -- which felt intentional, but not forced -- then to the dismissive vice admiral who further complicates his own son's failing mental health. More salutes to Mia Massaro who played Paula Pokrifki, Roxy York who played Ester Pokrifki for her take on "Right Here Waiting for You," which was beautiful, and the entire cast who did an outstanding job. It was hard for me to take my eyes off Williams and White during the play and to "Hold On" to my big mouth when they broke out the Wilson Phillips hit during a very sad scene. I like the way the band was almost built into the play's scenery. I had never seen something like that before. I also enjoyed the way that the production used lights to show the actors at the beach and give depth to emotional moments in the play. Salutes all around!

‘An Officer And A Gentleman’