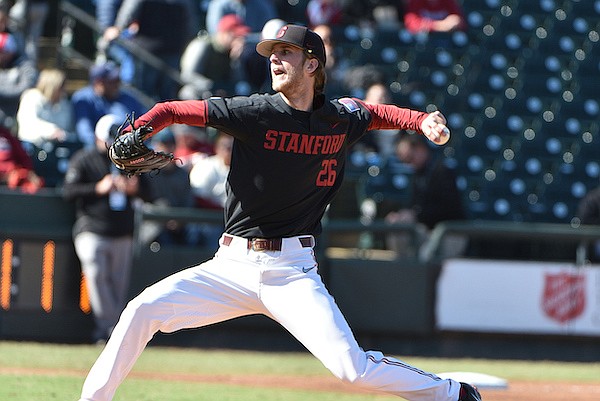 Stanford pitcher Quinn Mathews throws during a game against Arkansas on Sunday, Feb. 27, 2022, in Round Rock, Texas.

Stanford junior left hander Quinn Mathews threw six scoreless innings and led the fifth-ranked Cardinal to a 5-0 victory over fourth-ranked Arkansas on Sunday at the Round Rock Classic.

Mathews struck out a career-high 10 and allowed two hits. He walked four, including Braydon Webb to lead off the seventh inning on his 105th pitch.

Stanford right hander Tommy O’Rourke struck out Brady Slavens and Jalen Battles, and Webb was caught in a rundown between first and second base to end the inning, preserving Mathews’ scoreless outing.

Arkansas (3-2) threatened in the ninth when Robert Moore and Michael Turner walked, and Chris Lanzilli singled to load the bases against closer Braden Montgomery. But Braydon Webb grounded into a fielder’s choice that forced out Moore at the plate, and Montgomery struck out Slavens and got Jalen Battles to fly out to center field to strand three runners.

It was the second time the Razorbacks left the bases loaded. Peyton Stovall struck out against Mathews to strand three in the fifth inning.

Arkansas struck out a season-high 15 times against three Stanford pitchers. Tommy O’Rourke struck out four in a two-inning relief stint.

The Razorbacks will play Louisiana-Lafayette (3-3) at 7:20 p.m. Sunday in their second game of the day.

Stanford (6-1) finished an undefeated weekend with an impressive doubleheader sweep Sunday. The Cardinal beat Indiana 13-0 in seven innings in the first game of the day at Dell Diamond in Round Rock, Texas.

Arkansas and Stanford were supposed to play Saturday, but the game was postponed due to unplayable field conditions following a game between Indiana and Louisiana-Lafayette.

After recording 14 hits in the Indiana game, the Cardinal remained hot with 13 hits against the Razorbacks. Brett Barrera, who was 3 for 3 in the first game, homered in his first at-bat against Arkansas starter Hagen Smith — a two-run shot to opposite-field right to put Stanford ahead 2-0 in the second inning.

The Cardinal roughed the freshman left hander Smith, who threw six scoreless innings in his collegiate debut last week. Against Stanford, Smith allowed 3 runs, 6 hits and 2 walks, and hit a batter in 2 1/3 innings. He struck out three.

He left the game after walking Carter Graham with the bases loaded with one out in the third inning to put Stanford ahead 3-0. Arkansas right hander Issac Bracken stranded the bases loaded in the inning when he struck out Barrera and got Braden Montgomery to ground out to shortstop.

The Cardinal stranded 10 base runners, including three at third base. Arkansas stranded eight.

Stanford added an unearned run against Heston Tole in the fifth inning. Brock Jones singled with one out, advanced to second base on an error by third baseman Cayden Wallace and stole third base.

He scored on Barrera’s RBI single with two outs. Barrera finished the weekend 7 for 11 with 8 RBI.

Wallace committed two errors at third to bring his total to three errors during the weekend.

Bracken (1 2/3 innings) and Tole (3) combined to throw 5 1/3 innings of relief without an earned run. Stanford added its final run in the ninth when Elijah Trest walked Jones, who stole second, went to third on Kody Huff’s single and scored on a two-out wild pitch by reliever Miller Pleimann.