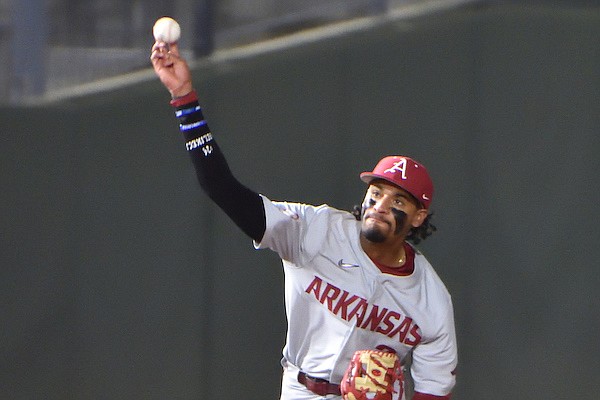 Arkansas shortstop Jalen Battles throws during a game against Louisiana-Lafayette on Sunday, Feb. 27, 2022, in Round Rock, Texas.

Jalen Battles hit a three-run home run in the top of the eighth inning to give fourth-ranked Arkansas the lead over Louisiana-Lafayette on Sunday night in the Round Rock Classic.

In the ninth inning, Battles saved the Razorbacks with his glove.

After the Ragin’ Cajuns loaded the bases with no outs, Battles was involved in all three outs to preserve Arkansas’ 6-4 victory. He forced out a runner at second base for the first out of the ninth, then ended the game with a leaping catch on a line drive hit by Wil Veillon. Battles turned a double play with a flip to Robert Moore at second base.

ULL likely would have tied the game if Battles didn’t make the catch. The Ragin’ Cajuns had the tying run at second base, but Robertson came too far off the bag on the hard-hit ball by Veillon.

Battles’ eighth-inning homer against ULL junior right hander Drew Shifflet was a no-doubter to left field. It scored Chris Lanzilli and Jace Bohrofen, who walked in the one-out at-bats prior to Battles.

Arkansas (4-2) won despite a day-long offensive struggle at Dell Diamond in Round Rock, Texas. Battles’ hit was just the fifth of the game against the Ragin’ Cajuns, and the Razorbacks had three hits in their 5-0 loss to Stanford earlier in the day.

After striking out 15 times in the loss to the Cardinal, Arkansas struck out 13 times against ULL (3-4).

But unlike the earlier game, the Razorbacks kept the deficit manageable into the late innings. Arkansas pitcher Jaxon Wiggins allowed 3 runs over the first 3 innings, but settled in for a 6-inning start.

Relievers Zebulon Vermillion, Nick Griffin and Kole Ramage each recorded three outs to end the game. Griffin hit Julia Brock with a pitch and walked Heath Hood to lead off the ninth, and Ramage inherited a 2-0 count against Conor Higgs after Griffin threw a 1-0 pitch to the backstop.

Higgs walked to load the bases before Battles’ defensive plays backed up Ramage and sealed Arkansas’ second win of the weekend.

Battles struck out three times in the two games, but with the Razorbacks trailing 3-2, he put a charge into a 1-0 pitch that energized the Arkansas dugout and seemed to wake up the team’s bats.

The Razorbacks added a key run in the ninth inning and went ahead 6-3 when Zack Gregory led off with a walk and scored on a one-out RBI double by Moore.

ULL led 1-0 on Conn Kimple’s RBI groundout in the first inning. The Razorbacks tied it when Gregory scored on a fielding error by second baseman Bobby Lada in the top of the third, but the Ragin’ Cajuns regained a 3-1 lead with Carson Roccaforte’s two-run double against Wiggins in the bottom of the third.

Arkansas had a chance for a big fifth inning when four consecutive hitters reached with two outs. Dylan Leach scored when Michael Turner drew a two-out walk, but the Razorbacks stranded the bases loaded when Lanzilli struck out looking at a 3-2 fastball from relief pitcher Jacob Schultz, who entered just before the at-bat.

It was the third time Arkansas left the bases loaded Sunday. The Razorbacks stranded them loaded twice against Stanford, including in the ninth inning when they put three on with no outs.

Wiggins allowed 3 runs and 3 hits, and walked 2 in a 6-inning no-decision. He struck out four.

Vermillion, who struck out two in a perfect seventh, was the winning pitcher.

The Ragin’ Cajuns lost all of their games in Round Rock. They fell 5-1 to Stanford on Friday and 12-4 to Indiana on Saturday.

Arkansas is scheduled to play again Wednesday at 3 p.m. against Nebraska-Omaha at Baum-Walker Stadium.

CORRECTION: The upcoming game vs. Nebraska-Omaha will begin at 3 p.m. A previous version listed an incorrect start time.