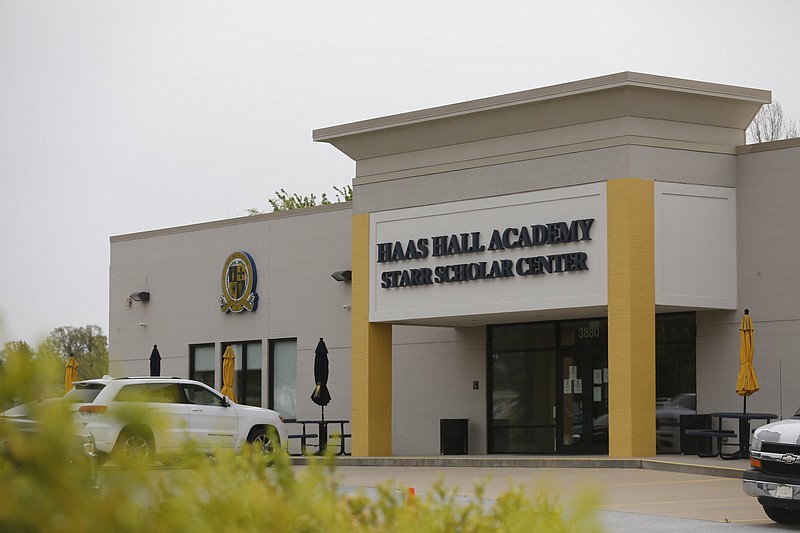 The Arkansas Charter Authorizing Panel on Tuesday endorsed plans for a fifth Haas Hall Academy charter school campus, this one in Fort Smith and affiliated with the private Arkansas Colleges of Health Education.

The state charter panel favored the plan for up to 500 seventh-through-12th-grade students at a meeting in which it also supported:

• The five-year renewal of the state-issued charter for the Haas Hall campuses in Fayetteville, Springdale, Bentonville and Rogers, including an increase in the overall enrollment cap from 2,000 to 2,500.

• A location change for the Premier High School of Fort Smith that will open in August.

The decisions by the Charter Authorizing Panel are subject to review by the Arkansas Board of Education before they can be considered final.

The state Education Board, which will meet in March, has the authority to approve panel decisions on charters without a review or conduct its own review of the proposals before making final decisions.

Martin Schoppmeyer Jr., the founder of the high-achieving, award-winning Haas Hall Academy system, told the panel that the proposed school in Fort Smith would serve students in grades seven through 11 in its first year of operation in 2023-24, and top out at 500 students in seventh-through-12th grades the following year and each year thereafter.

The school that intends to attract students who have interests in medical careers would be located on an upper floor of a former corporate office building at 1000 Fianna Way. Other floors will be occupied by the Research Institute and Health Wellness Center that is an arm of the Arkansas Colleges of Health Education, which operates the Arkansas College of Osteopathic Medicine in Fort Smith.

Schoppmeyer said the Haas students will interact with the medical science researchers as part of the Haas Hall program and that the medical organization is providing some of the technology for the planned charter school.

Charter panel members and attorneys for the charter system and Arkansas Division of Elementary and Secondary Education on Tuesday combed through the Haas Hall System's dozens of waivers to state laws and rules to update them based on current state law and to remove duplications.

Panel Chairwoman Deborah Coffman asked what security and safety measures will be in place at the Fort Smith campus.

Coffman also asked why the Haas campuses have a waiver of the state requirement for an alternative learning environment for students not successful in traditional school settings.

The Charter Authorizing Panel on Tuesday revisited a request for a location change for a different Fort Smith charter school, after tabling the matter last month.

The Premier High School of Fort Smith -- sponsored by Responsive Education Solutions of Texas -- had asked to locate at 3400 Rogers Avenue. The school is approved to open in August to up to 300 in ninth-through-12th grades.

The panel held off approving the location for the new charter school until questions about its proximity to a Dollar General store that sells alcohol could be resolved.

Doralee Chandler, director of the Arkansas Alcoholic Beverage Control, wrote to the panel earlier this month to say that a retail liquor permit may not be issued to an entity that is within 1,000 feet of a school or church property. But, she said, that prohibition does not apply to businesses -- such as a grocery store -- that sell beer or wine for off-premises use.

"Specifically, Retail Liquor permits are the permits that are associated with 'liquor stores,'" Chandler wrote. "As such, there are no distance requirements for any establishment unless they possess a Retail Liquor Permit."

The charter panel voted to support the Premier High of Fort Smith location based on Chandler's letter.

The panel also endorsed the opening of a Premier High School location for up to 75 high school students at 3216 Stateline Road in Texarkana.

That satellite campus to open in August to serve as a second-chance school for students who have dropped out or are at risk of dropping out of traditional high school programs will be part of the newly named Premier High Schools of Arkansas charter system.

The system would also include the soon-to-open Fort Smith campus as well as the existing Premier High of Little Rock that can serve up to 250 students.