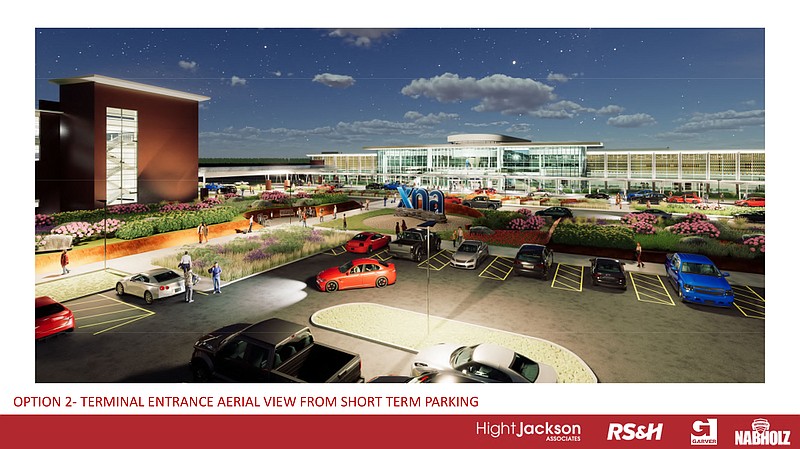 Here's a look at the design concepts for the proposed renovation of the outside of the terminal at Northwest Arkansas National Airport that is preferred by the board of directors. The architect's renderings by Height-Jackson no longer includes a skybridge connecting the terminal and parking deck. Board members in November opted to scrap the skybridge idea and use the $21.3 million in estimated savings for other pressing projects. (Courtesy Hight Jackson Associates)

HIGHFILL -- Northwest Arkansas National Airport leaders got a look recently at new concept drawings of the proposed renovation of the terminal without a skybridge connecting it to the parking deck.

The early renderings could change some before the design is finalized, but they give a good idea of what the front of the terminal will look like.

Larry Perkin, with Hight Jackson Associates architects, said the structure to support a skybridge was left in place in case it's ever decided to pursue the feature again.

"We're not modifying anything that was already drawn and already budgeted," Perkin said. "And, so, we're looking at applying something to the face of that glass to really give the airport everything that we were hoping the skybridge would do -- the new front door, new sense of identity and entrance -- and really bring it up to a very relevant status."

Board members in November decided the $21.3 million estimated for the skybridge portion of the project could be better spent providing other amenities and services to customers and supporting efforts to bring the cost of flights down.

The rest of the renovation will go ahead as planned at an estimated cost of $34 million. There will be more elevators, escalators and stairwells and new baggage handling equipment. The federal Transportation Safety Administration and police areas will be renovated. There also will be a host of architectural upgrades, including new paint, terrazzo floors, lighting and sound baffles; a new information desk and a canopy along the front of the terminal covering the drop-off area; and new flight information displays.

Several projects that need to be done over the next few years could use the money, including the airport access road, a new control tower, a new rental car facility, a new fuel farm and fixed-base operation, a new western concourse, possibly a hotel and more parking, according to board members.

Hight Jackson developed two versions of renderings of what the project will look like without the skybridge.

"One has a very civic look to it," Perkin said. "The second one is more of an artistic look that still gives that definite identity. That's what we're going for, something unique."

Board members picked the second one, saying they preferred the more open design with lots of glass that will be a beacon of light at night and provide unobstructed views during the day.

Outside, landscaping will make extensive use of native plants and stone.

"From our perspective, we're really under-landscaped, very under-landscaped as compared to most airports," said Aaron Burkes, CEO at the airport. "It's something that just makes a tremendous difference in the whole look of a place."

Architects will finish their design and bring it back to the board for final approval. What board members saw last week was to make sure the architects and board members are on the same page.

"Every move we make really needs to reflect who we are as an area, and that's what all this is about," Perkin said.

A new access road to the airport is getting closer to reality.

The Arkansas Department of Transportation has approached airport officials about acquiring 60 acres directly across Arkansas 264 from the airport for the new access road interchange.

Airport officials said last week they'd like to donate the land, if possible, from about 120 acres they bought several years ago south of the airport.

Burkes said he thinks it makes sense to donate land for the road since the Transportation Department is picking up the tab to build it, saving the airport millions of dollars. He estimates the donation would be worth about $1.8 million.

Any donation will be subject to Federal Aviation Administration approval, and it's not yet clear whether the airport can legally donate any land.

"Just as a general proposition, you cannot give away airport property for less than fair market value," said Brian Burke, attorney for the airport. "There are, as you'd expect, numerous exceptions to that type of deal."

"I think as long as we've worked on this road, we need to do whatever we can do, legally, to get it done," said Art Morris, who represents Siloam Springs on the board.

Airport officials have wanted a new road to the airport since before it opened in November 1998.