Move of Tyson Foods executives to Springdale from other states will have positive impact, city leaders say 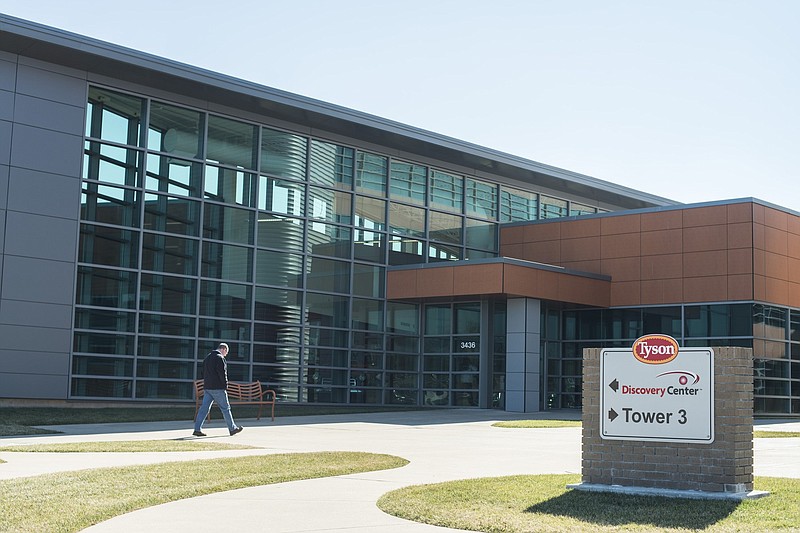 The exterior of the Tyson Foods Inc. headquarters in Springdale is shown in this undated file photo. (NWA Democrat-Gazette/Anthony Reyes)

SPRINGDALE -- City leaders say they are ready for new Tyson Foods executives -- no matter how many move to Springdale.

It's still a boon to the economy to create 1,000 jobs in the area, they said, whether they transfer from other Tyson locations or are hired new to replace those who didn't.

In October, Tyson Foods said it was recalling about 1,000 of its executives to work at its headquarters in Springdale. Only about 200 workers -- or about 20% in total -- have said they'll move to Springdale, according to a Thursday report in the Wall Street Journal.

The majority of Tyson Foods executives working in the company's Chicago area and Dakota Dunes, S.D., offices aren't willing to move to a centralized company headquarters in Springdale, the story said.

Dakota Dunes is a suburb of Sioux City, Iowa. The office there also pulls workers from northeastern Nebraska.

The newspaper's report didn't reduce the significance of the local company's action, said Bill Rogers, president of the Springdale Chamber of Commerce.

"The first thing that comes to mind is the commitment of the Tyson family to this community," Rogers said.

"One thousand jobs is wonderful for any city in America," Rogers continued.

Tyson said the relocation of jobs will be phased and will start after the first of the year.

Tyson Foods' corporate headquarters on West Don Tyson Parkway in Springdale will be expanded and parts of the headquarters will be remodeled in a years-long project, according to the company. The headquarters supports about 1,700 workers.

Rogers said Springdale over the past decade has led the state in the number of jobs created. He said the city gains 1,500 to 2,000 jobs each year.

The addition of 1,000 employees over a year is unusual, said Jay Chesshir, president and chief executive officer of the Little Rock Regional Chamber of Commerce. "But it's a really positive economic event that many communities don't ever see."

Bringing in 1,000 jobs brings money to Springdale, said Jeff Cooperstein, a senior research assistant at the Center for Economic and Business Research at the University of Arkansas.

And future Tyson executives won't come alone -- they will bring their families with them, he said.

"They come, and they will spend money," Cooperstein said. He noted they would access local doctors, car repair businesses and restaurants.

"It will have a ripple effect," Chesshir said.

Chesshir predicts a boost to rental and home ownership, school and daycare enrollment and church memberships.

He also noted the jobs that will be created as Tyson works to expand its home campus to accommodate the 1,000 workers.

Tyson announced Dec. 14 its purchase of the former Sam's Club building in Springdale for $19.34 million.

Derek Burleson, a spokesman for Springdale-based Tyson, said the 130,000-square-foot building can accommodate about 1,000 work spaces.

"The building will provide more space and flexibility as we consolidate our corporate offices and expand world headquarters," he said.

Cleveland said the district of 22,750 students has lost about 400 students in the last few years because of covid and the opening of charter and private schools in the area. The district also reduced enrollment in the prekindergarten program because school administration couldn't find teachers and families are keeping their younger children home in the face of covid, he said.

The addition of 1,000 people and their families "might make streets a little more crowded," said Philip Taldo, vice chairman of the Arkansas Highway Commission.

"Every car has a little more impact on the area's streets and highways," he said.

The state has plans to ease traffic congestion in the region, Taldo said. He expects ground to be broken in the next few months for road improvements to Arkansas 112, the Arkansas 612 bypass and a road connection to the airport, all projects of the Arkansas Department of Transportation.

"Growing pains are far more easily absorbed and dealt with when an economy is good," Chesshir said. "Economies move to the next best equilibrium possible."

"This is not the first time 1,000 families have moved to Northwest Arkansas and needed a place to live," Rogers said. Because it's a growing region, the influx of people has been continuous, he said.

NO ROOM AT THE INN

"But I don't know where they're going to live," he said with a laugh.

The housing shortage isn't catching anyone by surprise, Rogers said.

"Every leader in the region knows when we wake up every day that we need all kinds of housing."

"I am confident this is just one more challenge to overcome," he said.

The Arvest Skyline Report reviewing the first half of 2022 found a 2.3% overall vacancy rate for multifamily housing units, which is functionally zero, said Mervin Jebaraj, director of the Center for Business and Economic Research.

The average price of single-family houses is up 26.8% compared to one year ago, the report continued.

Cooperstein confirmed the region will see an increased demand for housing with 1,000 new jobs -- and executives will expect higher-end housing and apartments.

Springdale's Planning Commission and those of other towns in Northwest Arkansas over the last year have approved plans for subdivisions and apartments with hundreds of housing units. And many currently are under construction.

The city has expanded many roads, and built new fire stations and parks through bond issues approved by voters.

But Springdale also has put a moratorium on building in the southeastern part of town because the sanitary sewer pumping stations don't have enough capacity to serve the number of homes.

Springdale Water Utilities is working to expand those stations. The utility also is replacing and improving a 50-year-old sewer pipe not big enough to serve downtown.

The utility also has planned a water main that will carry water from Beaver Water Utility's new delivery main and pumping unit to provide drinking water to the western parts of Springdale, Fayetteville and Rogers.

Chesshir said the Northwest Arkansas region has and will continue to accommodate growth. He noted that Don Tyson Parkway and its interstate interchanges, and targeting districts such asdowntown and the area around Arvest Ballpark, are steps Springdale has made to embrace that growth.