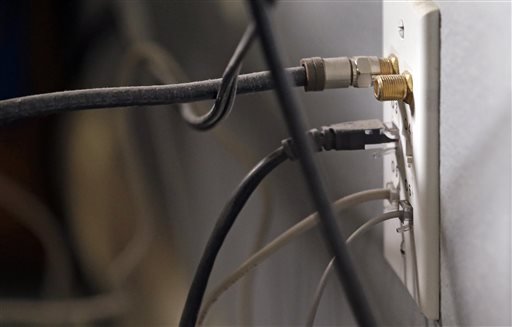 Cables connecting phone, cable and Internet service come out of a wall connector in the home office of Mike Loucks of Friday Harbor, Wash., in this March 2015 file photo.

The Arkansas Department of Commerce on Friday won the Legislative Council’s approval to use $93.8 million in federal American Rescue Plan funds for 14 grants for broadband projects.

The projects include two projects each in Montgomery and Pulaski counties and one apiece in Boone, Cleburne, Cross, Faulkner, Franklin, Garland, Jackson, Logan, Searcy and St. Francis counties.

The council also approved the Administrative Office of the Court’s request to use $20 million of the federal funds to help finance a new case management system.

A third request was approved as well. The request, made by the state Department of Finance and Administration, was to use $6.25 million for the opening of Sevier County Medical Center.

The council rejected a motion to approve 14 other requests for federal American Rescue Plan funds that have stalled in a legislative subcommittee. Instead, members voted to refer the requests to a Joint Budget Committee subcommittee.

In March 2021, President Joe Biden signed the $1.9 trillion American Rescue Plan Act that’s designed to help the United States recover from the economic and health effects of the covid-19 pandemic.

The $93.8 million authorized for broadband projects on Friday comes out of the state's allocation of $158 million in American Rescue Plan capital project funds.

The U.S. Treasury’s capital projects fund award to Arkansas specifies that it may be only used for broadband projects and related administrative expenses.

Arkansas was allocated about $150.2 million for broadband projects, with the balance to be used for broadband administrative expenses through 2026, state Department of Commerce Secretary Mike Preston said in a letter to steering committee Chairman Larry Walther.

The Arkansas Rural Connect broadband grant program has handed out $396.5 million in grants to 163 projects across the state so far, according to Chelsea O’Kelley, a spokesman for the state Department of Commerce’s Arkansas Economic Development Commission.