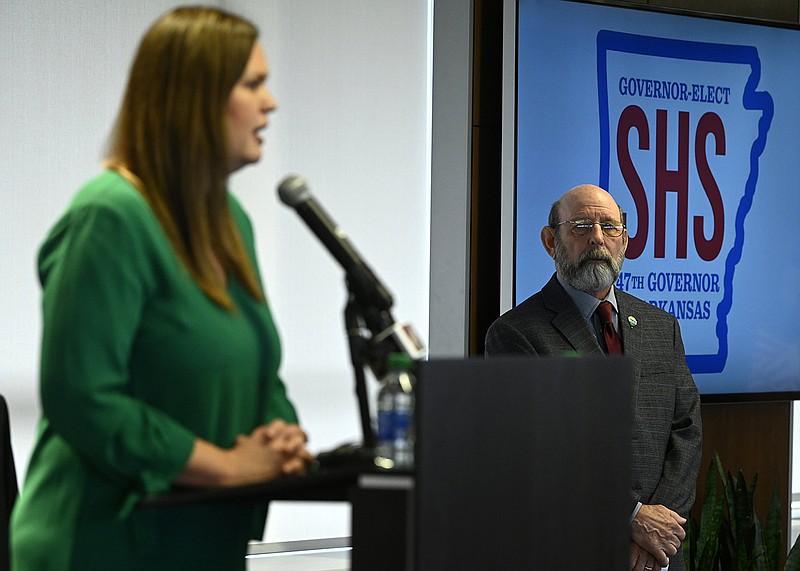 Governor-elect Sarah Huckabee Sanders, left, announces her intentions to nominate Mike Mills, right, for Secretary of the Department of Parks, Heritage, and Tourism during a press conference in Little Rock on Tuesday, Dec. 6, 2022. (Arkansas Democrat-Gazette/Stephen Swofford)

Governor-elect Sarah Huckabee Sanders announced Tuesday that she will nominate the founder of the Buffalo Outdoor Center to serve as secretary of the Department of Parks, Heritage and Tourism.

Sanders announced her plans to nominate Mike Mills for the position during a news conference at the Arkansas State University System office in Little Rock.

Mills, 72, is the founder and owner of Buffalo Outdoor Center in Ponca, which was Arkansas' first log cabin resort. From 1982 to 1986 he served as Arkansas' director of tourism, where he started Partners in Tourism, and he was inducted into the Arkansas Tourism Hall of Fame in 2018.

"Mike Mills is one of the premier outdoor recreation and tourism leaders not only in the state of Arkansas but across the country, and I am proud to announce my intention to nominate him as the next secretary of Parks, Heritage and Tourism," Sanders said. "Arkansas is the Natural State, and from our unparalleled natural beauty to our world-class outdoor recreation to our rich cultural heritage, we have an incredible story to tell. Together, we will share it with the rest of the nation and the world and take our state to the next level."

It is Sanders' third nomination announced this week, following her choice of Mike Hagar as secretary of public safety and director of state police and her intention to retain A.J. Gary as director of the Arkansas Department of Emergency Management. Nominations must be confirmed by the state Senate.

Sanders said she based her decision to nominate Mills on maximizing the "outdoor economy" in Arkansas.

"There is nobody who spends more time living, loving and enjoying the outdoors," Sanders said.

"I am honored that Governor-elect Sanders has nominated me to be the secretary of Parks, Heritage and Tourism, and ready to get to work growing our outdoor economy," Mills said. "It's time to unleash the Natural State's potential to be a true leader in parks and tourism, improving access for all Arkansans and our visitors to world-class outdoor recreation."

Salary information for Mills or Grobmyer was not available Tuesday afternoon.

Mills said he doesn't have any concrete plans to change the way the Department of Parks, Heritage and Tourism operates but said he is ready to make some advancements.

"I have some great backing from the industry itself and the governor, so I can't wait to see us take the department to a higher level," he said.

Sanders said she believes the state has barely scratched the surface when it comes to the potential of its outdoor economy.

"I want to expand and grow the tourism industry like we have never done before," she said.

Mills will take over from Stacy Hurst. She was appointed director of the Department of Arkansas Heritage by Gov. Asa Hutchinson in January 2015, then named secretary of the Arkansas Department of Parks, Heritage and Tourism in 2019 following a transformation of the state government.

Hurst said she met Mills in 2015 and has frequented the Buffalo Outdoor Center many times.

"He certainly knows the department very well, and he is passionate about Arkansas," Hurst said.

Hurst said she is focused on ensuring a smooth transition for Mills and said she will return to the private sector to help run the family business, Tipton and Hurst florist.

"I will certainly miss our colleagues at the department," she said. "We have a passionate staff and dedicated leadership who have done so much for this state."

Hurst said one of the greatest accomplishments during her time as secretary of the department was how it handled the covid-19 pandemic, and she pointed to how the department navigated governmental transformation in 2019 after the Legislature enacted Gov. Asa Hutchinson's plan to reduce the number of executive branch agencies from 42 to 15.

Richard Davies, whose career with the Arkansas Department of Parks and Tourism spanned nearly 43 years, said he is proud of his longtime friend.

Davies served as state parks director for 14 years and as executive director for 25, serving on the cabinet of five Arkansas governors. He said he has known Mills for more than 40 years and will be there to assist whenever needed.

"I have been trying to tell him that every issue is not what it seems. There are always two sides of the story," Davies said when asked what kind of advice he would give Mills. "You can't just go buy something to solve the problem. There are a lot of things you have to go through in the state government that you don't have to deal with in the private sector."

Davies said he has been impressed with the department staff's ability to cater to every interest group.

"Everybody has their thing. We have bikers, hang gliders, hikers and more, and sometimes these groups' interests can clash with each other," Davies said. "I think Mike will be good at bringing everyone together and communicating. Communication is key in this department."

Davies said one thing the department needs to look at is where staff are being placed to address needs.

"I have a few friends there still who are telling me they are so understaffed they are meeting themselves coming and going," he said. "I think we need to take a hard look at where we are placing our key people."