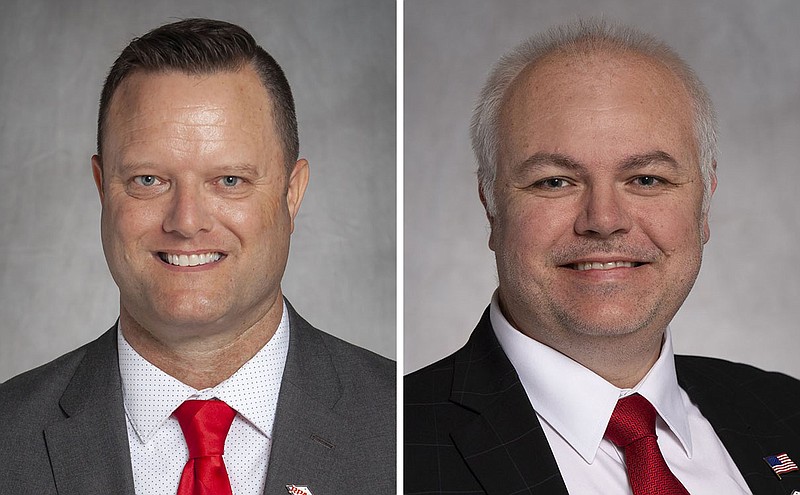 Two businessmen will face each other in the Republican primary for state House District 22.

The winner will run against state Rep. David Whitaker, D-Fayetteville, who seeks his sixth term in the Legislature.

The district includes Farmington along with parts of Prairie Grove and Fayetteville.

The Republican contenders in the May 24 primary are Brian Hester, a real estate appraiser, and Don McNaughton, a Realtor.

Whitaker, an attorney, faces no primary opposition. The general election is Nov. 8.

Hester ran against Whitaker unsuccessfully in 2020, with Whitaker winning 55% of the vote. But district boundaries changed in 2021, taking out sections of Fayetteville.

The state redraws legislative district lines after each U.S. census so each member represents an equal number of people. There are 100 House districts. The federal government conducts a census every 10 years.

House members serve two-year terms and receive a base salary of $44,357.

The district was heavily Democratic when he ran in 2020, Hester said, "and I still stuck my neck out because it was worth the fight."

"The boundary changes move the district a little bit to the right. I think it's clear the state and most of the country is starving for true conservative leadership," he said.

"If elected I'll fight abortion tooth and nail," Hester said. "I'll let nothing creep in to weaken our laws on abortion."

He pledged to be a strong supporter of gun owners' rights.

"I won't let critical race theory be taught in Arkansas," he said, referring to the study of how race influenced laws and institutions.

States are the last line of defense from federal government overreach, Hester said. He will oppose government mandates and push back against threats to personal liberties, he said.

"When I knocked doors in 2020, the question people asked most often was whether I was for or against Trump," Hester said, referring to then-President Donald Trump. "This year, that question is, are you a RINO?"

That term refers to "Republican in name only."

Hester said primary voters can be assured he is a true Republican who will fully support conservative principles, not bargain them away in the legislative process.

As a small business owner, Hester said he will focus on making government more efficient and responsive and hold the line on spending and taxes. District 22 residents want to keep more of the money they earn, he said.

Hester is a brother of state Sen. Bart Hester, R-Cave Springs, who the Senate picked to be the incoming Senate president.

Working as an appraiser makes him familiar with the challenges people face in buying a home in the region, Hester said. He said he sees no end soon to rising house prices in the area.

"The supply is just not there," he said.

"I'm in a unique position to talk to people about why they come to Northwest Arkansas," McNaughton said. "They tell me they want a safe place to live and raise their kids. They tell me about efforts by 'defund the police' groups in the places they come from and how they didn't feel safe, so they pulled up stakes. The also talked about what they weren't allowed to do and how they want the freedom to go to work and pay their bills."

"The more I heard about why people move to Northwest Arkansas, the more I wanted to make sure those things they are talking about don't happen here," he said.

McNaughton said he would be a strong supporter of law enforcement and gun owners' rights in the Legislature. He would also support veterans and is pro-life, he said.

"I'm not a politician," he said. "I'm a small businessman and have been since I was 16 years old."

McNaughton's father was a veteran of the Vietnam War, he said.

"I believe in giving all the support we can to the people who have served this country to help them get back into civilian life," he said.

Working families in the district need less "red tape" and lower taxes, McNaughton said. Freedom from ever-increasing and needless regulations of businesses is another reason people move to this region, and another aspect of life in Northwest Arkansas he wants to protect.

Even here, cities "could make it easier to build a house," he said. But the demand for housing here far outstrips supply. That problem has no easy, quick solution, he said.