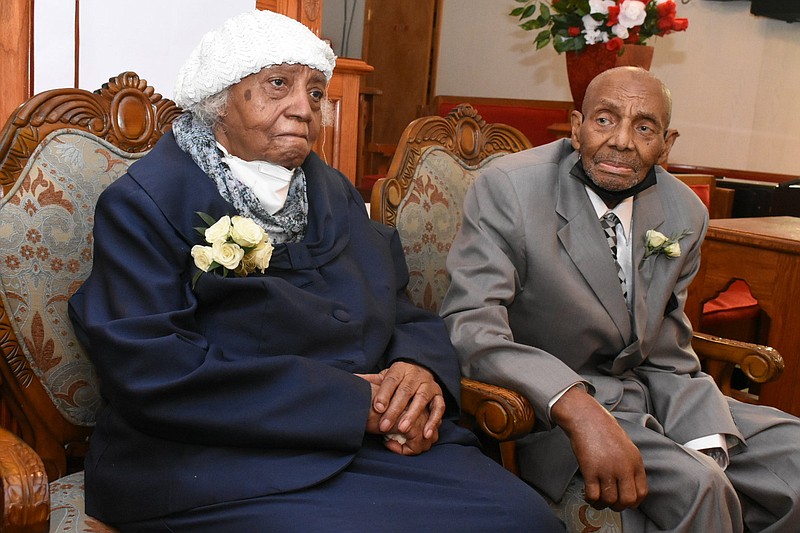 This wasn't the first time Arwilda Kelley Whiteside and her husband, Cleovis, were honored as Arkansas' longest married couple, but it was a more emotional occasion for the White Hall residents.

"We're here with our family members, our pastor, our friends," said Arwilda, 96, married to her 100-year-old husband for nearly 83 years. "A lot of our children couldn't be here today, but we thank God for every [one of the] 12. We have five generations. When I tell you all, all of the miracles and blessings in our family -- if you all don't believe in miracles, if you don't believe in God, you're in trouble, because, one thing, God is our life."

Family Council, a conservative and pro-family organization based in Little Rock, staged the celebration for the Whitesides on Sunday following worship service at Mt. Olive Missionary Baptist Church on Princeton Pike in the Barnes community, just west of Pine Bluff. The organization recognizes the state's longest married couple each year, and the Whitesides had the honor in 2019, the year before the pandemic set in and put the celebration on hold.

"God has been so good to us through the years," Cleovis said in a soft-spoken tone. "We're very proud of it."

As the Whitesides were showered with one gift after another, Cleovis found it harder to hold back the tears, and Arwilda dabbed them away with a tissue while shedding a few of her own. The couple received an engraved silver plate, bouquet of flowers and a bowl of fruit.

Even Charisse Dean, a government affairs official with Family Council, could not hold back tears during her comments as the group showered the Whitesides with gifts including a letter from Gov. Asa Hutchinson.

"It's just so beautiful to see commitment in the flesh," Dean said. "You hear the stories, but to actually see them in the flesh and hear how they affected their community and the love they have and how it's been so good for everyone, it's touching and emotional for me. It's a blessing to just be a part of it. I'm honored to be here."

Arwilda Whiteside, who considered herself shy as a young girl, shared a lengthy testimony about one of many miracles they've been praying for in recent days.

"We had one child from my daddy to back a pickup truck over him. He was about 4 years old. My mama screamed, 'You backed up over James.' His name was James. He drove off of James, and James was unconscious."

Arwilda was on her way to St. Louis and spent one night when she received a telegram from her family asking her to come back to Clarendon because James may not make it.

Still in tears over the accident, Arwilda learned James survived.

"Right now, at this time, that child is taking care of another child we named Willie," Arwilda said. "He got hit by a truck. Docked up on the truck and fell down the highway here on the pike. Blood was just running downhill. But, do you know what? This child who was on the train I was crying about, he's taking care of another child now because right now, he needs help. He's got him on hospice. We're trying to get there now. My husband's sick. I'm sick.

"But God!" she exclaimed, her left hand reaching in the air. "Only God. Only God."

WHERE THE LOVE BEGAN

The story goes, according to Family Council, that young Arwilda and her friend Caroline were walking home from school when some boys began to chase them. Caroline told Arwilda to run to Cleovis, who would protect them. He did and forced the boys to leave the girls alone.

Years later, Cleovis bought Arwilda a box supper from church that she prepared for 25 cents.

"One day, Cleovis will be your husband," Caroline is said to have told Arwilda.

On July 24, 1939, it rained so hard, only Cleovis' parents, Arwilda's family, his best friend Detroit and the minister were at their wedding. The minister trudged through with his horse and buggy to get to the ceremony, arriving at 11 p.m. to marry them at 11:30.

The Whitesides settled in Pine Bluff by the 1940s. Cleovis worked at the Pine Bluff Arsenal for 34 years and Arwilda was a homemaker.

"I was born on Ash Street," said Kathy Whiteside, 73, the fifth-born of 12 and the first to be born in Pine Bluff. "They bought property on Carr Road, and we moved out here in 1950, when they joined Mt. Olive. We were raised semi-farm style where we played with each other because there was no neighbor in shouting distance. So, when you grow up in a large family and you're within, you learn to love each other. Your best friend is there, your enemy is there, your sisters, your brothers, your chickens, your cows, your horses, and we love that. It was just a wonderful environment because Mom and Dad would get out and play hide-and-seek with us, they would get out those snowballs with us, they would play softball. Everything we did, we did together as a family."

Kathy told the congregation she was raised in a family of love.

"Our parents taught us to pass out the love to whoever needs it," she said. "When someone came to the house, it was 12 of us, but move over! We'll make room."

Now, if the Whitesides need something, at least one of their own is there, Arwilda said.

"We're reaping the seeds we planted," Arwilda said. "I cannot tell the world how blessed we are. Oh, God, miracle after miracle."

All the children were trained to believe in marriage, Kathy said, adding it was about loving God.

Cleovis greets every child, grandchild, great- and great-great grandchild who walks through his front door as his "special child," Arwilda testified.

One word best describes the Whitesides' secret to a nearly 83-year matrimony: God.

Cleovis didn't expect a well-attended congregation the Sunday after Easter to commemorate their love.

"What in the world happened?" Cleovis said he reacted.

The longest recorded marriage lasted 86 years and 290 days, according to the Guinness World Records. Herbert and Zelmyra Fisher of North Carolina were married from May 13, 1924, until his death on Feb. 27, 2011.

"We won't have a mind to know when that happens," Arwilda said.

Her long-lasting love for that protective young man from Clarendon isn't easily shaken, even if her voice is from the tears of joy.

"This is my husband," she proclaimed. "I love my husband. I love my children." 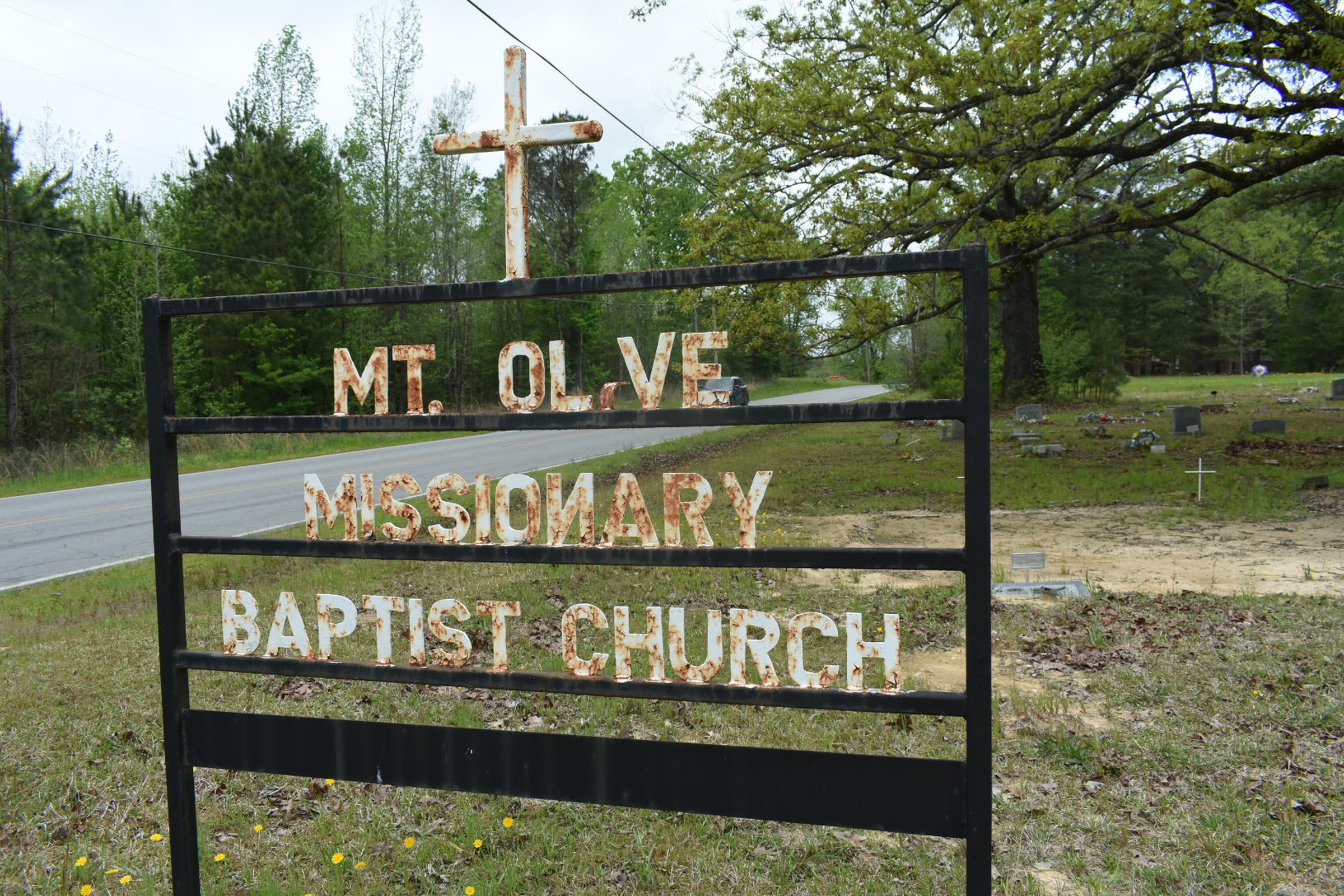 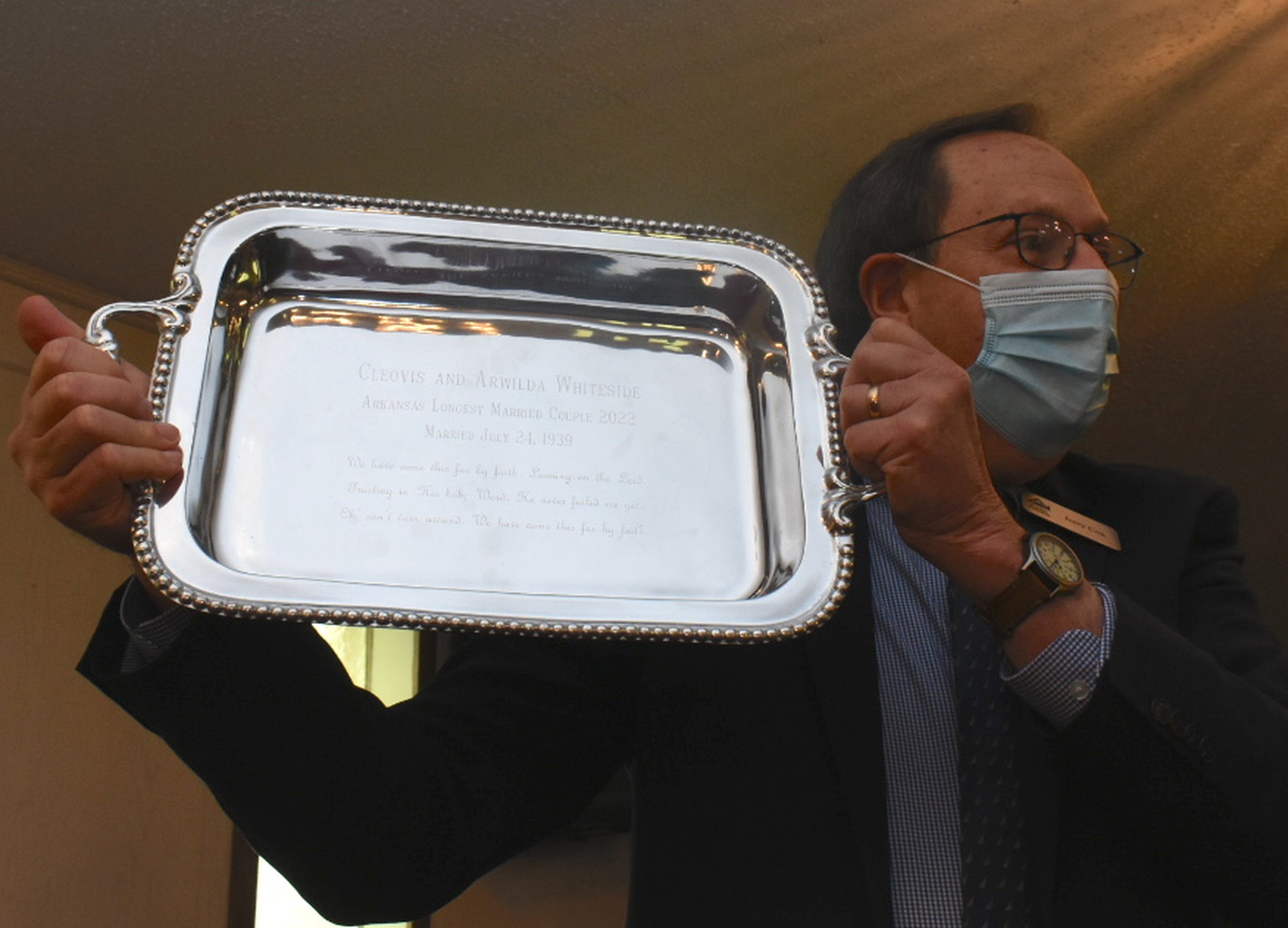 Jerry Cox of Family Council awards an engraved silver plate to Cleovis and Arwilda Whiteside as Arkansas' longest married couple at Mt. Olive Missionary Baptist Church in the Barnes community on Sunday, April 24, 2022. The plate reads: "Cleovis and Arwilda Whiteside/Arkansas' Longest Married Couple 2022/Married July 24, 1939/We have come this far by faith. Leaning on the Lord/Trusting in His holy Word. He never failed me yet./Oh, can't turn around. We have come this far by faith." (Pine Bluff Commercial/I.C. Murrell) 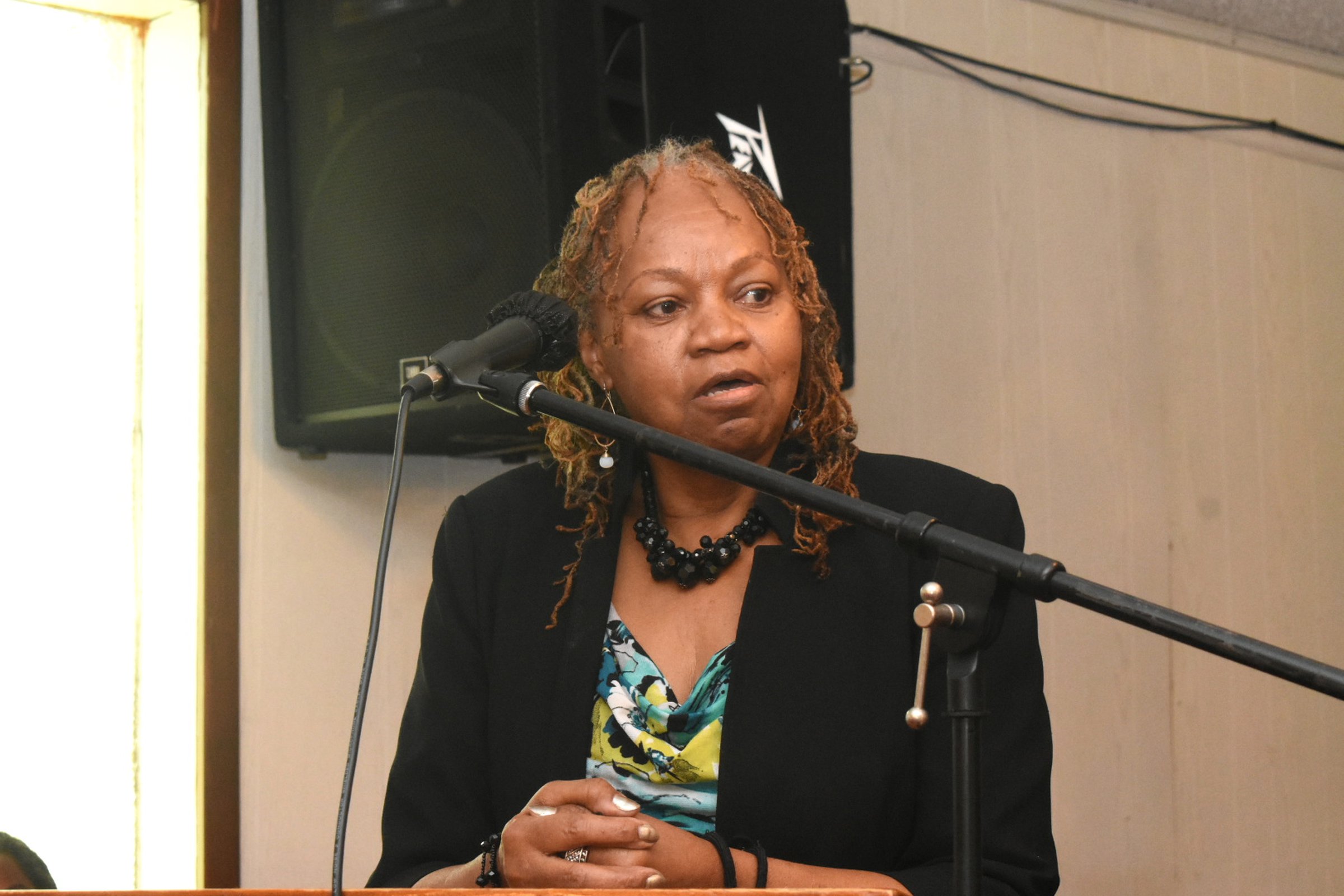 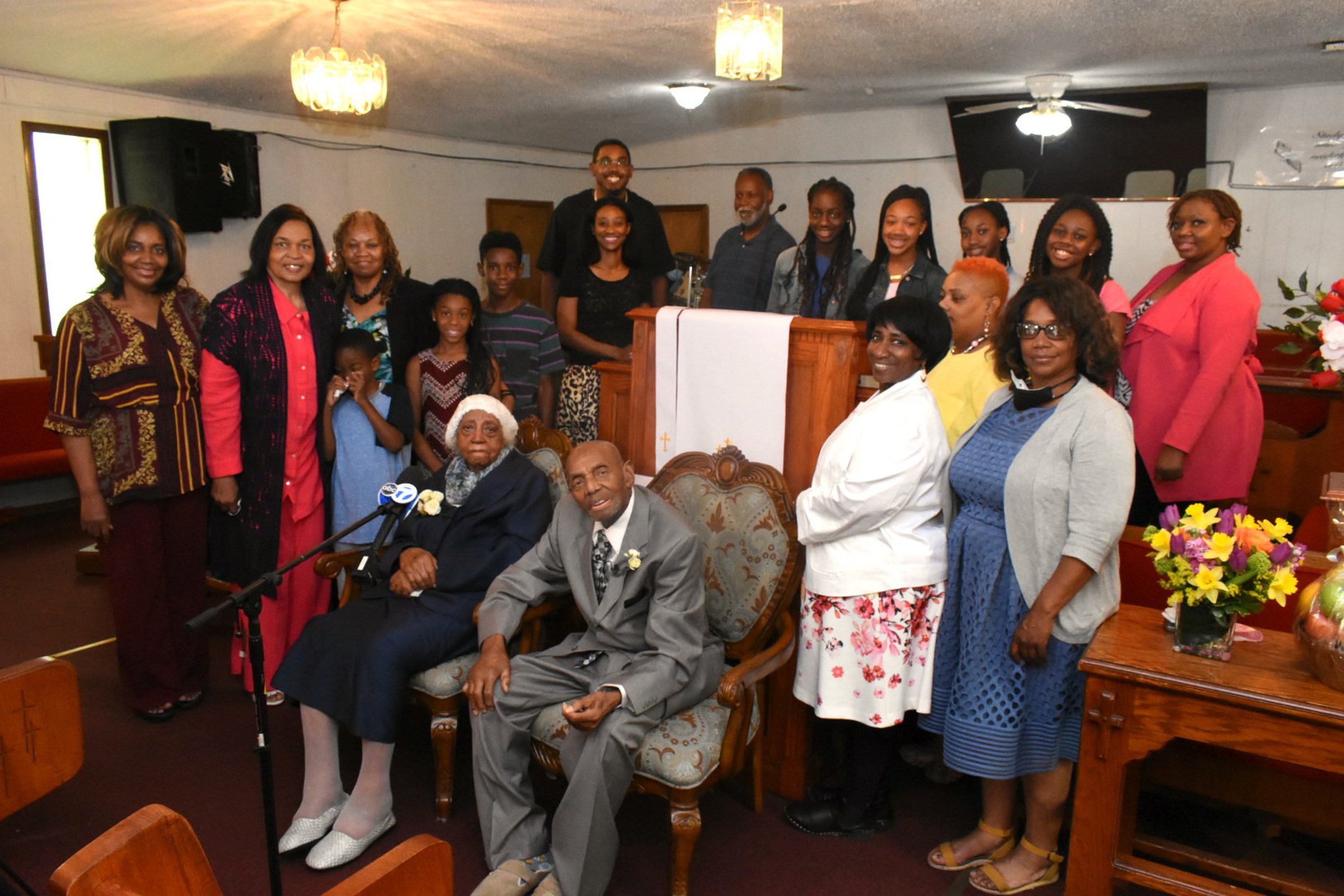 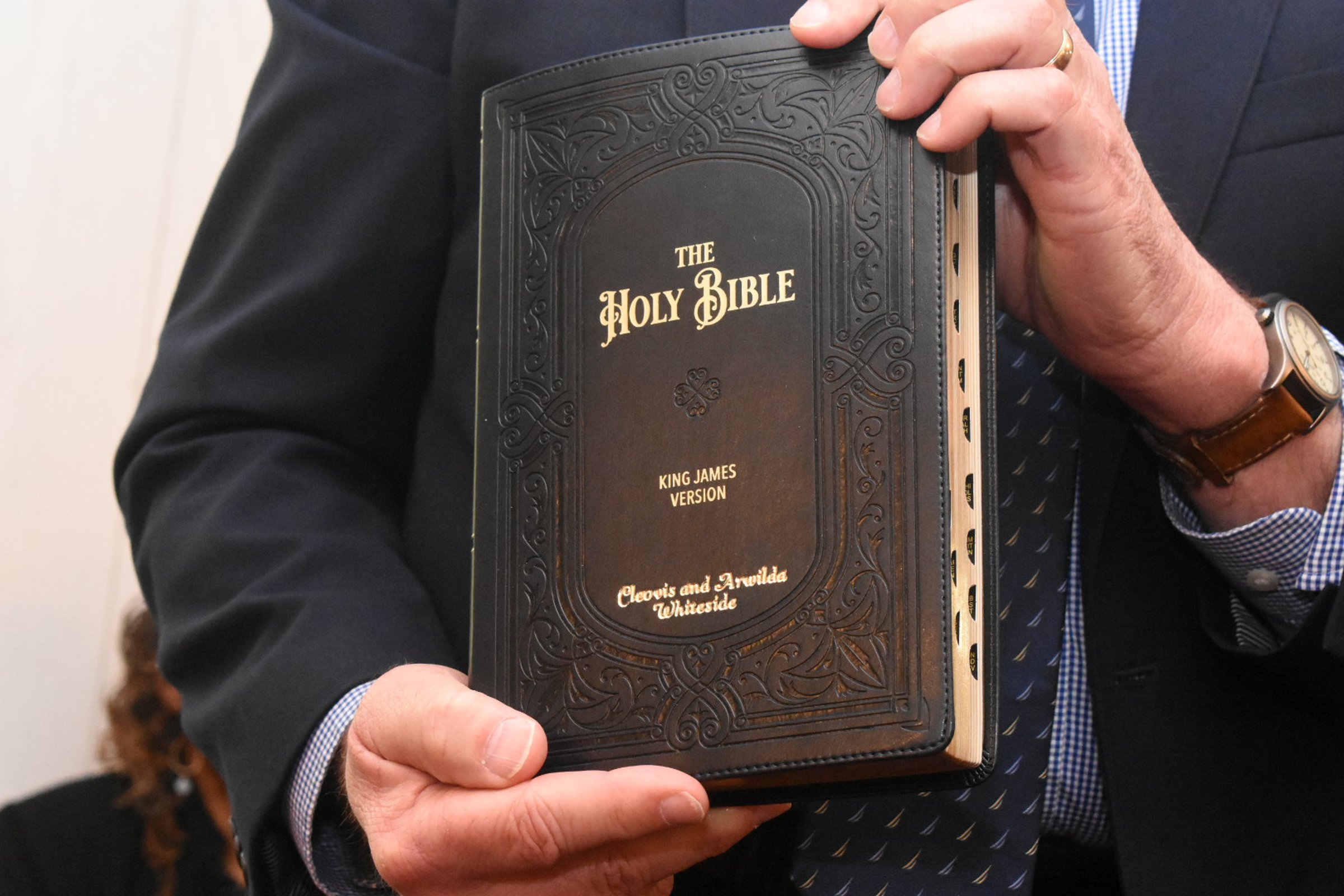