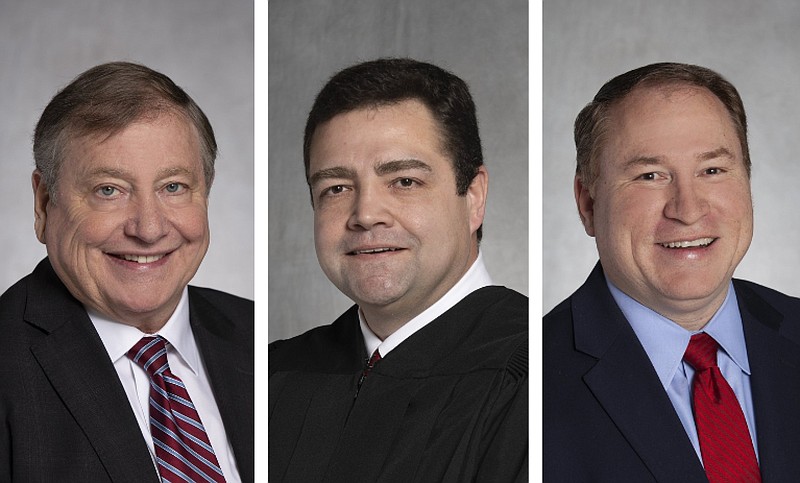 An Arkansas Supreme Court justice seeking a second term will square off against a lower-court judge and a well-known lawyer during the May 24 election in which voters will also decide various Democratic and Republican primary races.

Wynne, 69, has served as an associate justice in Position 2 on the state Supreme Court since 2015. He previously served as a judge on the Arkansas Court of Appeals and as district judge in Dallas County.

Wynne said he hoped that people would vote for him based on his record serving in the courts.

Wynne said he believes he has done what his oath requires of him, which is to apply the rule of law to each case.

"I think based on my experience and my nearly eight years on the Supreme Court that people felt like I deserve another term and they will elect me again for a second term," he said.

Carnahan, 50, has served as the Division 1 district judge in Faulkner and Van Buren counties since Jan. 1, 2021, after winning election to the post. From Jan. 1, 2019, to Dec. 31, 2020, Carnahan served in the Division 2 district judge position after he was appointed by Republican Gov. Asa Hutchinson. Before that, Hutchinson appointed him as circuit judge in the 20th Judicial Circuit, which includes Faulkner, Searcy and Van Buren counties, from Jan. 1, 2017, to Dec. 31, 2018.

Carnahan said he believes his life experience is what separates him from the other candidates. He said that having grown up in southwest Little Rock, he has seen what crime and a broken judicial system can do to a city.

"I believe my primary role in Faulkner and Van Buren Counties is to protect the life of the innocent if a defendant is found guilty," he said. "As a justice, it is important to have actually litigated in front of a jury, as well as presided over Circuit Court hearings and jury trials. Being an attorney for the Arkansas State Board of Pharmacy was a blessing to my judicial career, both in terms of my knowledge of addiction issues that my court deals with and in dealing with a highly regulated profession, who deliver quality health care to us all."

He said judicial experience matters in maintaining one's neutrality before holding hearings, seeing the evidence or reading all the pleadings.

"Judges sometimes have to do unpopular things, and facing those decisions requires more than being an advocate," he said. "Having small town as well as big city practice experience as a senior deputy prosecutor, being defense counsel in a criminal case, having a domestic relations practice, and generalized civil practice are all important. I've done all that."

Sterling, a longtime attorney in Little Rock, is making his second attempt to win a seat on the state Supreme Court. In 2018, he was defeated in a runoff by Justice Courtney Hudson.

Sterling first became known to the state's voters during an unsuccessful run in the Republican primary for attorney general in 2014. The next year, he was hired to lead the legal division of the Department of Human Services under Gov. Asa Hutchinson's administration.

"I'm the most conservative candidate, whose values reflect those of most Arkansans. I'm a strong Christian and have been practicing law for 25 years," Sterling said. "I paid my own way through college, graduate school, and law school. I worked at a small firm for 5 years, a large firm for 4 years, and my own firm for 7 years. Governor Hutchinson appointed me as Chief Council at DHS in 2015, overseeing the largest law firm in state government."

Wynne said he believes the role of the judge is reflected in his tenure serving on the court.

"And that is to apply the rule of law and continue to be fair and impartial and to treat each litigant as if it's the most important matter in their life, and in a lot of ways it is," he said. "I hope to continue to do that."

Wynne said he hopes people realize how important the role of a Supreme Court justice is to the state.

"And I would want them to understand that the rule of law is the most important consideration that I have when I look at their case," he said. "And regardless of anything else, what is before me in the record, which is the briefs and the record of the court below. I read those things and apply the law, and I believe if they look at my opinions that person would see consistency and accurately reflect the rule of law."

Carnahan said he believes a justice or judge must operate within the boundaries of the law and issue rulings and opinions that conform to the Constitution and the laws of the General Assembly, so long as those statutes do not violate the constitutional rights of the people.

"Judges and Justices must stay within their lane and not seek to solve problems beyond the scope of the case in front of them, nor should they put themselves in the position of being 'super legislators' who cross the line and decide political questions," he said. "Additionally, the role of a justice is to provide stability to the legal landscape so that business and citizens don't operate on shifting sand, unless a Constitutional Right is at stake. Finally, justices must have a respect for prior decisions of their own court, unless the results are clearly erroneous."

Sterling said the role of a judge is to use the Constitution as a North Star and avoid the temptation of making law from the bench.

"Under Separation of Powers, the legislative branch makes laws, the executive branch enforces those laws, and the judicial branch applies those laws to the facts and circumstances of each case fairly and impartially," he said. "Essentially, judges should simply call balls and strikes and leave policy making to the legislative branch. If a judge disagrees with a law, they should nonetheless uphold the law unless it is inconsistent with the Constitution. If they want to change the law, they should hang up their robe and run for a legislative position, instead."

Carnahan said voters should know that his judicial philosophy is concrete.

"Constitutions matter," he said. "The text of a law matters, and laws passed by the people and the legislature should be respected and interpreted with their original meaning in context. Innocent human life must be protected by judges and the guilty should be humanely punished or rehabilitated. Farmers, businesses, and citizens need a Supreme Court that allows them to make rational decisions about their economic interest and will protect private property rights. Finally, voters should know by voting for me, they won't be throwing away their vote."

Sterling said he wants Arkansans to know that if they want to put a strong Christian, judicially conservative justice on the Supreme Court, then they will have that opportunity in this election by voting for him.

"If they want a Supreme Court that more closely reflects the values of all Arkansans, that is what I'm offering," he said. "If they want a Justice who respects the Constitutional role of the Judiciary and avoids the temptation of stepping out of that lane, they should vote for me. If they want a Justice who will serve with honor and integrity, they can trust me to do so. I have consistently earned an 'AV Preeminent' Martindale Hubble rating for my high legal ability and integrity. Governor Hutchinson has twice appointed me as a Special Justice on the Supreme Court, and now I am running for a full term and asking for your vote."

Wynne, the incumbent in the race, said he would just want voters to educate themselves on the Supreme Court.

"I think one of the things of utmost importance is that the people of Arkansas still get to elect the justices of the Supreme Court," he said. "I think that enables people with their vote to determine who is going to serve on their court as opposed to an appointed system that some states have. I would simply ask that voters become as educated as possible of the responsibilities of someone on the Supreme Court as they cast their vote."