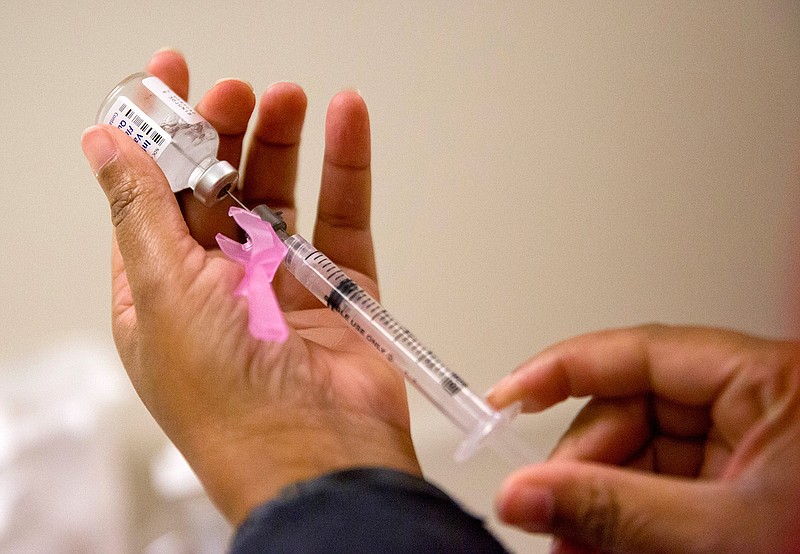 In this Feb. 7, 2018, file photo, a nurse prepares a flu shot at the Salvation Army in Atlanta. (AP Photo/David Goldman)

The quickly approaching flu season could be one of the worst Arkansas has experienced in several years because people have lower immunity to the virus after an almost nonexistent influenza outbreak last fall and winter, doctors and public health officials are warning.

Social distancing, mask-wearing and other precautions that were mostly mandatory and in place during the winter months to curtail the spread of the coronavirus were also effective at lowering the rates of influenza not only in the state but also around the country.

Annually, there are millions of cases of the flu in the U.S. and thousands of deaths. During the 2020-21 flu season, there were a few thousand cases, according to the U.S. Centers for Disease Control and Prevention.

Nationally and in Arkansas, public health experts are concerned that the flu could come back with a vengeance in the coming weeks as guidelines in place during the pandemic are more relaxed and people's immune systems are more susceptible to the flu simply because not that many people have contracted it over the past 12 months.

"We are worried we are going to have the perfect storm of the covid-19 pandemic going on as well as influenza," said Dr. Robert Hopkins, an internist, professor of internal medicine and pediatrics and chief of the division of general internal medicine at the University of Arkansas for Medical Sciences. "Hopefully people will get vaccinated [for the flu]."

Only about half of the 3 million people who live in Arkansas get a flu shot annually, Hopkins said.

If those numbers stay true for vaccination rates ahead of the coming flu season, "we are looking at a potentially very bad year for flu," Hopkins said.

As an early indicator, Hopkins pointed to a summer outbreak of respiratory syncytial virus, or RSV, which is more common in winter months. Essentially a mild-to-severe cold, it likely appeared over the summer because of more relaxed guidelines related to the pandemic, Hopkins said.

"We saw a lot of RSV during the summer, which is an odd time to see RSV," the physician said. "So we are concerned about having the same phenomenon with influenza."

The CDC echoes the sentiment of Hopkins in the agency's guidance for the coming flu season. The CDC said on its website that because of the spread of viruses, like RSV, "outside of their usual seasonal increases," there could be more widespread outbreaks of the flu this winter.

"While it's not possible to say with certainty what will happen in the fall and winter, CDC believes it's likely that flu viruses and the virus that causes covid-19 will both be spreading at that time," the agency said on its website. "Relaxed covid-19 mitigation measures may result in an increase in flu activity during the upcoming 2021–2022 flu season."

"In general, covid-19 seems to spread more easily than flu and causes more serious illnesses in some people," the CDC said. "Compared with people who have flu infections, people who have covid-19 can take longer to show symptoms and be contagious for longer."

Dr. Jennifer Dillaha, chief medical officer and medical director for Immunizations and Outbreak Response at the Arkansas Department of Health, said it will be crucial for people who become ill to get tested as soon as possible to determine if the illness is the flu or covid-19.

"Of course, anyone who has covid-like or flu-like symptoms should get tested," Dillaha said. "They should stay home and not expose other people, and since masks work, they should consider wearing a mask out in public."

Dillaha said the last severe flu season in Arkansas was in 2017-2018, when there were almost 3,000 hospitalizations and about 228 reported deaths.

"That flu season peaked early, and it peaked at about 250 hospitalizations a week," Dillaha said. "So if you put that on top of covid, then it could become a significant stressor to the health care system."

Dillaha said she is particularly worried about school settings where children may not be wearing masks and were not exposed to the flu last year because so many kids were learning from home or were required to wear masks at schools. Influenza spreads easily among children, she said.

School administrators could be faced with the double challenge of determining individuals who need to quarantine because of the coronavirus while battling a second front of widespread flu outbreaks.

"We strongly encourage all school kids to get the vaccine this year," she said. "We don't want people to get the flu and covid-19 at the same time, and because it is so difficult to tell them apart and either one can cause severe illness, people who have a respiratory illness -- whether they think it is covid or not -- should stay home and not go to school and not go to work."

The state Health Department is encouraging people to get vaccinated against the flu via local health departments or at mass vaccination clinics the agency is organizing over the next few weeks around the state.

The CDC said on its website that it is safe to get a flu vaccine at the same time as a covid-19 vaccine.

Lelan Stice, a pharmacist and owner of Doctor's Orders, a pharmacy chain with locations in Pine Bluff, White Hall and Star City, said that since his businesses started offering flu vaccines about a week ago, there has been strong turnout.

At his Pine Bluff location alone, Stice said 500 shots have been given, and he's had to place orders for more of a specific type of flu shot that is stronger and given to people over 65.

In comparison, during last flu season, all three of the pharmacist's locations administered about 1,500 doses.

"It is a pretty high demand," Stice said. "We are trying to source some more."

TOO EARLY TO GAUGE

Doctors and public health experts say that, so far, there have not been any widespread flu outbreaks in Arkansas. They said annually the outbreaks usually spread from larger cities, sometimes via flights coming in from major hubs like Atlanta or Dallas.

Still some experts say it is too early to tell how severe of an outbreak there may be of the flu. On flights, on many public transit systems around the country and in school systems elsewhere, people are still wearing masks, which means the spread may be curtailed once again this flu season -- at least in some locations.

"With the flu, I tend to go against the grain because it is so hard to predict the future," said Sheldon H. Jacobson, a professor of computer science at the University of Illinois at Urbana-Champaign who researches data-driven, risk-based decision-making to evaluate public health policy.

"We are in the habit of doing things that prevent, or at least limit, the transmission of viruses, and that is not going away over the next six months, which means we are still going to see a lot of people wearing face coverings," Jacobson said. "It is probably going to be bad, but it is probably not going to be as bad as people wanted to believe because people are already taking appropriate actions to limit the spread of infectious diseases, which are respiratory."

Still, Jacobson said, because of the early similarities in symptoms of the flu and covid-19 and the risk of public confusion over what virus people are getting sick with, there are concerns that hospitals could potentially once again be overwhelmed with not only with one, but two viral outbreaks.

"The problem is it starts to convolute the care of people," he said. "It is far easier to get the vaccine for both [influenza and covid-19] and to play it safe."