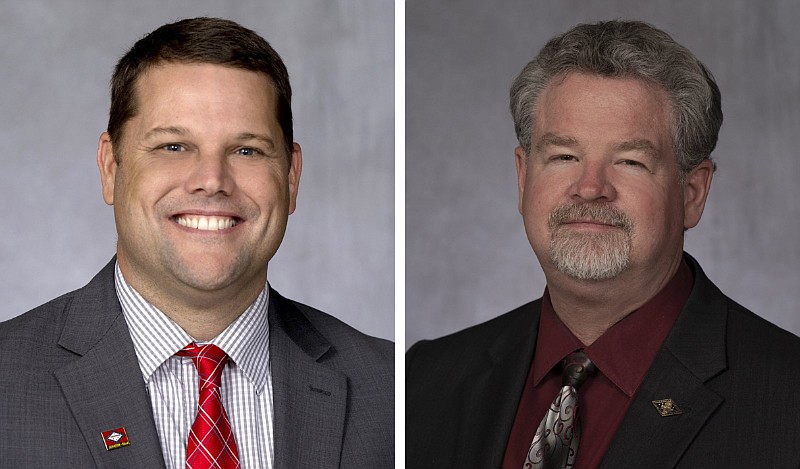 The Arkansas Legislature is set to be called into extended regular session, starting Wednesday, to consider legislation to reconfigure the state's four congressional districts based on data from the 2020 U.S. census.

Senate Bill 721 by Sen. Bart Hester, R-Cave Springs, would split Pulaski County among three congressional districts, creating four districts roughly based on the state's geography. It's among a handful of proposals that will be considered.

Pulaski County contains Little Rock and has been entirely in the 2nd Congressional District since the 1960s, according to historical data from the Arkansas Geographic Information Systems office.

Hester said he drafted SB721 to "have as geographically sound a map as possible," arguing that the map is "the most cohesive map that's been produced to this point."

"Pulaski County happens to be in the center of the state, and if you're trying to draw a cohesive map that's just natural that would happen," he said.

The General Assembly controls the once-a-decade redrawing of congressional boundaries. State legislative districts are redrawn after the census every 10 years by the Board of Apportionment, made up of the governor, attorney general and secretary of state.

U.S. Rep. French Hill, R-Ark., who has held the seat since 2015, declined to comment on the proposals through a campaign spokesman.

"My first thought was, you can't be serious," Elliott said of Hester's proposal, adding that she thought it was nefarious to split the state's most populous county. "For a long time, I know Republicans have wanted Pulaski County to be something other than a blue county, and I think this is one way to attempt that long fever dream that has been out there."

She added that Pulaski County has one of the highest non-white populations, and it would be "gerrymandering" to split it among multiple congressional districts.

"Arkansas is one of the last Confederate slave states to have not elected a person of color to Washington. This proposal flies in the face of having any interest in doing so," Elliott said.

Tucker said he would likely oppose any map that divides Pulaski County.

"There are a lot of factors that goes into drawing maps," he said. "One of them is cohesiveness, and [Hester's] map does a good job of that. For me, keeping communities of interest together is one that I believe deserves more importance. ... Obviously, Little Rock is a community of interest."

County Judge Barry Hyde, a Democrat and Pulaski County's chief executive, said he believes the home of the capital city and the state's most urban county should all be in one district. But he said he was used to reaching out to different members of the state's congressional delegation on matters that might affect multiple counties, so splitting the county "may not be as big a deal as anybody thinks it might be" in terms of how he engages with the state's federal representatives.

Hester said he understood that his proposal is ultimately better for the GOP than other maps, but that it was reasonable, and no redistricting proposal would change the fact that Arkansas is a "vastly red" state.

"No matter how the maps look, there's no way to draw a map that we're not going to have four Republican congressmen," he said. "To say that you're gerrymandering is a joke. ... I would say again, reaffirm that splitting Pulaski County wasn't the intent of this map; it's just the icing on the cake for me."

Hester said he believes his map would be challenged in court but withstand judicial scrutiny, noting that he assumed all maps would be litigated. He said his proposal was the "leading contender" among redistricting bills that have been filed so far.

The chairmen of the House and Senate committees on state agencies and governmental affairs, which are tasked with hearing redistricting proposals, said there wasn't yet a consensus among lawmakers.

Senate committee chairman Sen. Jason Rapert, R-Conway, said he had seen several maps, all of which are "very viable" and "we will just find out which of those maps tend to build the consensus." He said he was not leaning toward any particular proposal but called criticism of Hester's map as gerrymandering "baloney."

"When you try to split the least counties in the state, and to have nice geographic districts that are manageable, guess what? It often splits Pulaski County. You can achieve redistricting and compensate for population differences in one single county rather than splitting any other county," Rapert said.

Clark said he initially didn't plan to file any redistricting proposals, but found the idea of splitting only one county interesting. When drafting his two proposals, Clark said he took that into account as well as comments the committees heard when they met Monday. He said he also aimed to keep "hill counties" together in a new version of the 2nd Congressional District.

He said he didn't look at the Democrat or Republican breakdowns for his proposal and was "just trying to make a map that makes sense."

The two bills are the same except one proposes including Saline County in the 2nd Congressional District while the other would place Pope County in that district.

He said he believes both proposals would hold up under judicial scrutiny.

"Why have an issue with Pulaski County and not Sebastian County or Crawford County?" he said. "If we'd gone in and tried to break up a minority community, sure, but we didn't."

He said he believes his proposal made more sense than Hester's as a gradual move forward from where the lines are currently, while Hester's is "drastically different" but would make sense if the state was starting from scratch.

House committee chairman Dwight Tosh, R-Jonesboro, said it was too soon to say whether there was a consensus behind any particular bill.

"At the end of next Monday, we'll have a better handle, as they say, on where we're at and what we need to do as we move forward. I think it's only fair to give each sponsor the opportunity to appear and let them justify their bill, and I think that's a fair process," Tosh said.

"As chair, there are 75 counties in the state of Arkansas, and they are all subject to the redistricting process, and there are no areas which are placed in higher priority than others, and we need to let this process go forth and listen to the arguments," he said.

Tosh said he expected more proposals to be filed.

Among them will be one from Rep. Jim Dotson, R-Bentonville, who said he plans to file a proposal to be heard at Monday's committee meeting. He said Wednesday that he was aiming to create a "good, workable map that a majority of everyone agrees to."

The committees will meet jointly at 1 p.m. today to consider proposals filed Monday, Tuesday and Wednesday then meet again Monday to discuss bills filed later in the week.

House Speaker Matthew Shepherd, R-El Dorado, is paying attention to what is being filed but not commenting on specific proposals, House spokeswoman Cecillea Pond-Mayo said in a text message Wednesday afternoon.

Republican Gov. Asa Hutchinson said in a written statement that he was not going to comment on specific congressional maps at this time.

"I will watch the legislative debate and add my thoughts at the appropriate time," he said.

Information for this article was contributed by Stephen Simpson of the Arkansas Democrat-Gazette.