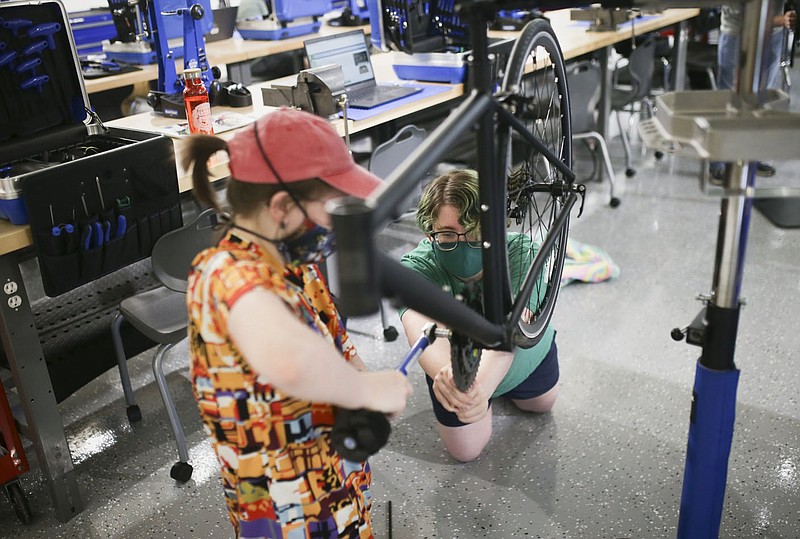 The college was awarded $1,246,864 from the Walton Family Charitable Support Foundation for the phased rollout of the bicycle assembly and repair technician program, according to a college news release.

The first phase includes the renovation of the college's physical plant to create the Bike Technician Lab. In the second phase, the building will be further renovated to create the larger Cycling and Technician Education Center, which will house additional Bicycle Industry Employers Association-accredited programs, the release states.

The association's goal is to "connect the needs of bicycle industry employers with regionally accredited colleges to develop smart, cost-effective programs for both schools and students," according to the association's website.

It's the first community college to have such a program, Bolinder said. Minneapolis Community Technical College will soon start a similar program, she said.

Twenty-three of the program's 24 slots are filled. Classes started Aug. 23.

Most of the students are from Benton County, but one drives from Fort Smith. They include a 72-year-old woman, and a high school student who is home-schooled, Bolinder said.

Amar Bahati came from Los Angeles to enroll in the program.

Bahati is the nephew of Rahsaan Bahati, 10-time national road champion who also runs the Bahati Foundation, established in 2010 in California with a mission of "supporting youth inner-city and underserved communities through a healthy lifestyle, access to ed-tech educational opportunities, and of course cycling outreach programs that are all designed to empower and inspire youth on and off the bike," according to its website.

Amar Bahati said he doesn't ride bikes anymore after his bike was stolen about five years ago. His earliest memory of riding a bike is when he was about 10 years old and he crashed into a tree.

He hopes the program will lead to a job with his uncle or in the bike-technician field. Right now, he's getting acclimated to Arkansas.

"The weather is pretty hot here," he said.

Bivi Espinosa from Rogers wanted to learn how to fix more than a flat bicycle tire and help members of a bicycling group she participates in -- Arkansas Latinas En Bici -- with their bike problems.

"This program is so in-depth," she said. "I have learned so much."

The newly acquired skills could also lead Espinosa into the bike-technician field, too. Espinosa said she doesn't see many female employees at local bike shops and even fewer who speak Spanish.

Dilynn Swearengin of Springdale chose a new career path because of the program. Swearengin planned to major in history, but saw a blurb about the bike technician course on the college website.

"I thought it sounded interesting," Swearengin said. "It has been hands-on since day one."

Swearengin learned how to change a flat tire on the first day of class.

The U.S. Bureau of Labor Statistics showed there were 12,400 bicycle repair people nationwide as of 2016, a figure projected to grow 29% by 2026, which the bureau calls "much faster than average." Nationally, the mean annual wage for bicycle repairers as of last year was $33,530, according to the bureau.

"Almost every bike shop in the country will tell you they could hire more mechanics if they existed," said Tim Robinson, an owner of Phat Tire Bike Shop, which has locations across Northwest Arkansas and Oklahoma. "So, I'm stoked we have a local certification program to get more people into this industry that will guarantee a living wage career coming out of it. Also stoked to have continuing education for our existing employees if they want to up their skills. Great for the industry and great for bike tourism in Northwest Arkansas."

The curriculum includes some of the manual from the Barnett Bicycle Institute, a trade school in Colorado Springs, Colo., with the rest being developed through a partnership with Bicycle Industry Employers Association and program director Sean Owen, curriculum specialist Ben Glenn and Casey Coughlin at Minneapolis Community Technical College, Bolinder said.

Owen joined the college from Trek University in Waterloo, Wis. Glenn was at Ramay Junior High School in Fayetteville before coming to the college, according to Facebook posts from the bike technicians' page.

Students must complete nine courses over two semesters to receive certification. Classes in math and English also are required.

The shop is set up with long benches where two masked students work together at a station that includes a bike to work on. Each student has a blue box filled with tools worth $1,000 that was provided by the grant. Those who successfully complete the program are allowed to take the tool boxes, Bolinder said.

To keep the program standardized, students cannot bring their own bikes to work on, Bolinder said. Community members already have asked if class members could work on their bikes, but that is not allowed, she said.

Northwest Arkansas has developed a reputation nationally as a region friendly to bicyclists.

As an example of that, People for Bikes, a bike advocacy organization, last year named three Northwest Arkansas cities -- Rogers, Fayetteville and Bella Vista -- among its top 15 cities in the country for bikes. 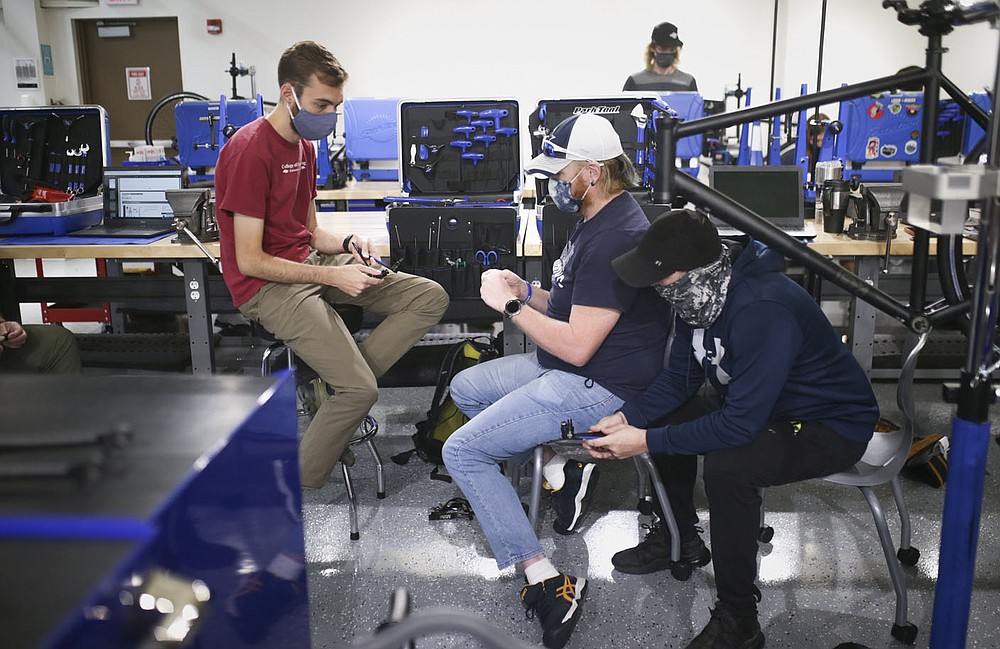 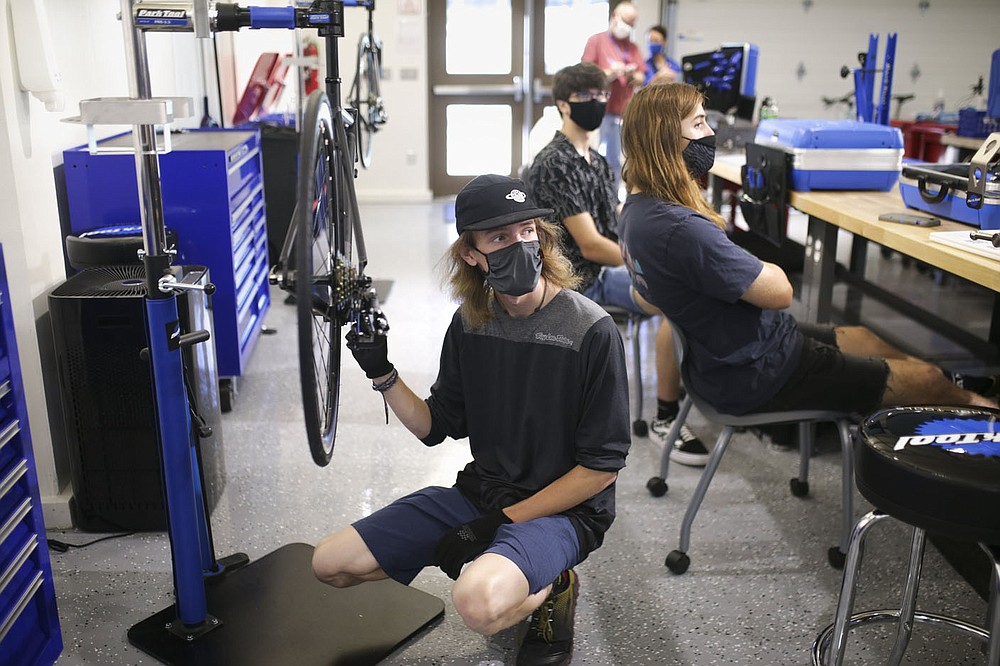 The story was updated to correct the city where Swearengen lives.