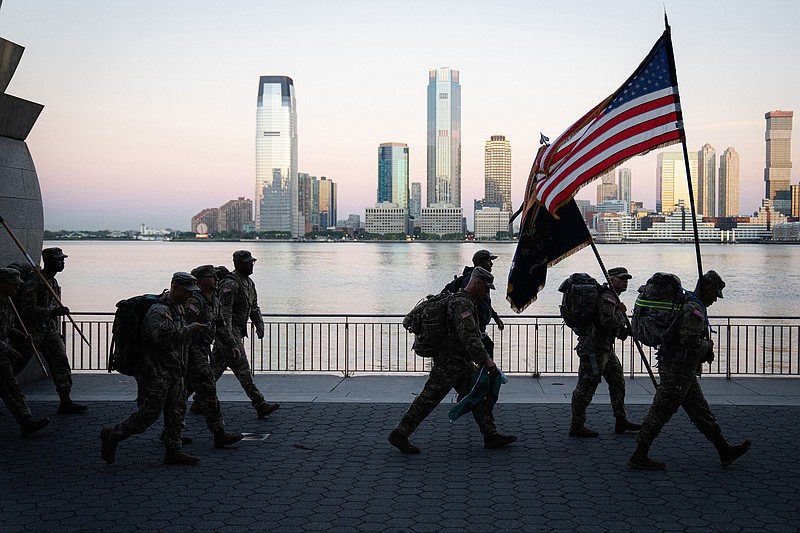 Members of the National Guard walk during the 9/11 mile march in commemoration of the 20th anniversary of the Sept. 11, 2001 terrorist attacks in New York, Saturday, Sept. 11, 2021. (Gabriela Bhaskar/The New York Times)

ARLINGTON, Va. -- Twenty years after the deadliest terrorist attacks in U.S. history, Americans gathered outside the Pentagon on Saturday to remember the lives lost in northern Virginia.

Two of the victims were Arkansans.

On Saturday, family members of the fallen came and grieved, joined in mourning by Pentagon survivors, first responders, young service members in fatigues and graying commanders in dress uniforms.

Defense Secretary Lloyd Austin and Gen. Mark Milley, chairman of the Joint Chiefs of Staff, both spoke at the morning event, returning to participate in an afternoon wreath-laying ceremony with President Joe Biden and Vice President Kamala Harris.

Similar observances were held Saturday morning at the site of the World Trade Center and at the Flight 93 memorial near Shanksville, Pa.

During the invocation at the Pentagon, Brig. Gen. Randall Kitchens emphasized the price paid not only by the dead, but by those left behind.

"We especially remember the surviving families and friends, and ask your continued healing of the grief that they bear each day. We celebrate these great American heroes who have laid such a supreme sacrifice onto the altar of freedom and, Lord, we ask that you bring them comfort, comfort to all survivors, as our nation remembers their patriotism," said Kitchens, the U.S. Air Force deputy chief of chaplains.

[20 Years After 9/11: Read more stories in this series at arkansasonline.com/after911/]

It ended at 9:37 a.m. when the plane hit the terrorists' intended target: the headquarters of the U.S. Defense Department.

Lyons, who attended Dollarway High School, moved to Alabama after graduating in 1989 and attended college there, juggling multiple jobs to pay for his studies. He enlisted in the Navy in late 1996 or early 1997, which opened the door to additional educational resources.

After serving on a guided missile cruiser, the USS Gettysburg, he was entrusted with a position at the Pentagon, transferring there in January of 2001, according to his Pentagon Memorial biography.

Like many others who died at the Pentagon, he was initially listed as "missing in action." Roughly a week later, military officials announced that Lyons, 30, was among the dead.

He was laid to rest in Little Rock National Cemetery.

Ivory, the third of eight children, was born in Phillips County but grew up in Kansas City, Mo., according to his Pentagon Memorial biography.

After graduating from high school, he enlisted in the Army in 1977 and served until his death.

At the Pentagon, Ivory, 42, served as the senior enlisted military assistant in the office of the Assistant Secretary of the Army for Manpower and Reserve Affairs.

He is buried in Arlington National Cemetery.

Ivory had a love for education, working and studying simultaneously. Possessing an associate of science degree from Des Moines Area Community College; a bachelor of science degree from The University of the State of New York, and a master's of education in counseling from the University of Maryland European Division, Ivory hoped to one day be an educator. His family created a scholarship in his memory.

Milley said the terrorists hated "the idea of America." The servicemen, he said, embraced -- and embodied -- "the idea that each and every one of us is created free and equal; the idea that we will rise and fall based on our merit, not because of our race or religion or anything other than our competence and our character; the idea of a free press, free speech, due process, the right to peacefully assemble and demonstrate and protest; the idea of life, liberty and the pursuit of happiness.

"All of that is what our fallen believed in, and all of that is what they represented. All the values and principles embedded in our Constitution and made real in our own daily lives were paid for in the blood of the fallen," he said.

"Never forget the sons and the daughters, the brothers, the sisters, the mothers, the fathers, who gave their tomorrows for our todays. Honor them. Honor them today and forever, and honor the cause they served," Milley said.

"To the friends and families of those who have perished, no words can ever soothe your grief. No act will ever replace your loss. No remembrance will ever fill that void. But please, please know that the men and women of the Department of Defense will always be with you as we give our sacred pledge that your loved ones will not have died in vain, so long as we stand watch over this great nation," he said.

In Pine Bluff, Dollarway High School has held assemblies on or around Sept. 11 to highlight Lyons' story.

[Video not showing up above? Click here to watch » arkansasonline.com/912mikelow/]

Linda London Simmons, who taught English and oral communications at Dollarway when Lyons was a student, helped spearhead the efforts.

"As a student, he was on top of his game. He was studious. He was scholarly, very respectful, kind of mild-mannered, but he did have a witty, jokeful, playful side to him," she said.

His pathway to success wasn't easy, she said.

"He had some struggles, obstacles, but he didn't allow that [to stop him.] He was relentless in his desire to succeed."

Ultimately, he found success, she said.

"He made it," she said. "If no one else [does], his school should promote and keep his memory alive."