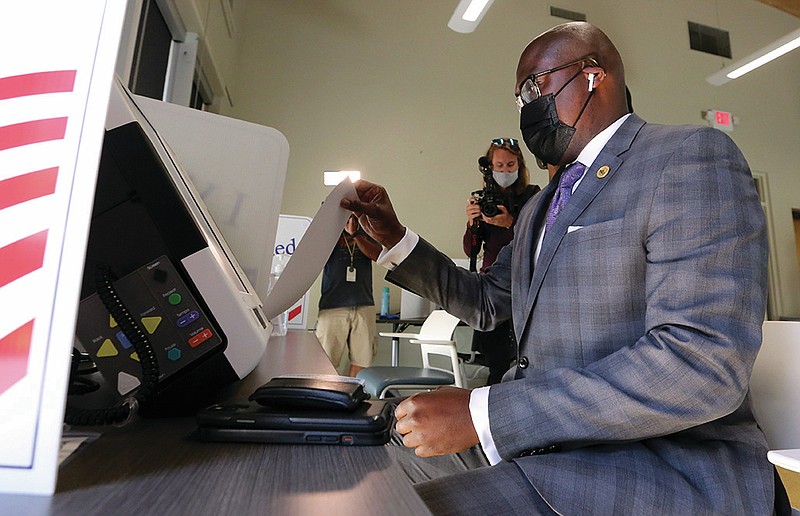 Little Rock Mayor Frank Scott Jr. puts his ballot in the voting machine on Tuesday, Sept. 7, 2021, at the Cowan Library while early voting in the citywide special election for adopting a 1% sales tax in Little Rock. (Arkansas Democrat-Gazette/Thomas Metthe)

More than 7,000 early ballots were cast between Tuesday and Friday in the Little Rock special election on Mayor Frank Scott Jr.'s proposed sales-tax increase, according to the Pulaski County Election Commission.

Off-site early voting concluded at 5 p.m. Friday, and the Pulaski County Election Commission released the updated figure a little over an hour later.

One day of early voting remains, albeit at a single location. Residents must go to the Pulaski County Regional Building at 501 W. Markham St. on Monday if they want to cast early ballots. Hours are from 8 a.m. to 5 p.m.

Scott is seeking a 1 percentage-point increase in the local sales-tax rate to pay for quality-of-life improvements.

The capital-improvements tax expires at the end of December. The mayor's proposed increase would expire a decade later, on Dec. 31, 2031.

According to the Pulaski County Election Commission, the total number of votes cast in the special election as of 5 p.m. Friday was 7,175, or 6% of the eligible voting population.

The biggest day of early voting so far was Friday, with 2,202 ballots cast, followed by Wednesday, with 1,876 cast, according to the commission.

In July, interim director of elections Shawn Camp told election commissioners at a meeting that he expected between 6,000 and 11,000 voters during the Little Rock referendum.

Camp has been relieved of his duties, effective immediately, according to a statement that Pulaski County Judge Barry Hyde issued Friday.

The interim director had notified officials that he would be out of the country for two weeks starting the day before the Little Rock election.

Asked about the importance of turnout in mid-September during an off-year election with regard to galvanizing his supporters to overcome whatever opposition may exist in the community, the mayor told reporters he was optimistic.

"Whether it's a special election or a general election, turnout is always key," Scott said. "And so we've been speaking to our voters, our supporters, for quite some time. We're hoping that they will come out -- we believe that they will -- but it's always a challenge when there's not a candidate on the ballot."